The British prime minister has defended his integrity to parliament in an emergency session, saying he regretted hiring a journalist at the heart of a scandal that has engulfed Britain’s politics, police and the press.

As members of the House of Commons debated the phone-hacking scandal for two hours on Wednesday, David Cameron said that “with hindsight” he would not have hired Andy Coulson, ex-News of the World editor, as his communications chief.

In the closest that Cameron came to a formal apology, he said: “Of course I regret, and I am extremely sorry, about the furore it has caused.”

He said he will offer a profound apology if Coulson had lied to him about his alleged involvement in phone hacking.

“You live and you learn, and believe you me, I have learned,” Cameron said. “The greatest responsibility I have is to clean up this mess.”

The debate followed the release of a parliamentary committee report which found that Rupert Murdoch’s News International newspaper business had “deliberately” tried to block a police investigation into hacking by journalists at the News of the World.

For his part, Ed Miliband, the opposition Labour party leader, said Cameron had committed a “catastrophic error of judgment”.

In 2007 Coulson quit as the editor of the News of the World over phone-hacking allegations, saying he knew nothing about it but took ultimate responsibility.

He denied any wrongdoing after two people employed by the newspaper were convicted of phone hacking in 2007. He quit his government role in January when police launched a new investigation.

Cameron said it was important to address the relationship between politicians and the media, but the two most serious parts of the scandal involved “wrongdoing in parts of the media and the potential that there was corruption in the police”.

The scandal has forced the resignations of senior executives at the company and two of Britain’s most senior police officers, Paul Stephenson, the London police chief, and John Yates, the force’s anti-terrorism head.

The report released on Wednesday by the parliament’s home affairs committee said that police had displayed no real will to force News International to co-operate with their inquiry and described the conduct of Andy Hayman, the officer in charge of the inquiry, as unprofessional and inappropriate.

As Britain was fixated with the scandal that has embroiled the press, police and police, the man who’s company is at the middle of it all has flown out of the UK.

Rupert Murdoch flew out of Britain on Wednesday, ending his turbulent 11-day visit dominated by the
phone-hacking scandal which climaxed in him being attacked by a member of the public with a foam pie at a parliamentary hearing on Tuesday.

“He has left,” a spokeswoman for News International, Murdoch’s British newspaper division, said after his private jet left from Luton airport, north of London.

Murdoch. 80, arrived in Britain on July 10 to deal with the crisis.

Murdoch, appearing with his son James Murdoch before a parliamentary committee on Tuesday, made a “humble” apology for the scandal but said he would not resign as chief executive of News Corporation.

He said staff who “betrayed” him were at fault and that he could not be held responsible for the “fiasco” at the News of the World.

“I would just like to say one sentence. This is the most humble day of my life,” Murdoch said shortly after the hearing began before the Culture, Media and Sport Committee of the House of Commons.

Murdoch was attacked by a protester with a foam pie during the hearing which was also attended by members of the public.

Analysts said Murdoch’s televised apology had now put the spotlight on how Cameron emerges under scrutiny over the scandal, which has included allegations of hacking into a murdered schoolgirl’s voicemail and the phones of British troops killed in combat.

Murdoch assured staff in an email that the company was taking steps to ensure serious problems never happen again and that staff who betrayed trust must be held accountable.

“In regard to the issues at News International, we are taking urgent steps to address the past and ensure that serious problems never happen again,” he said in a message sent after the parliamentary hearing.

“Those who have betrayed our trust must be held accountable under the law. I have the utmost confidence that we will emerge a stronger company.”

“I’m not going to engage in running commentary on testimony but I do believe Australians… are looking at News Limited here and are wanting to see News Limited answer some hard questions,” the prime minister said.

“And obviously News Limited’s got a responsibility to answer those questions when they’re asked.”

Its Australian chief, John Hartigan, has insisted there has been no similar wrongdoing at News Limited but has launched a review of all payments made over the past three years to ensure they were legitimate. 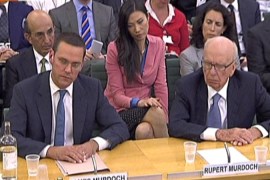 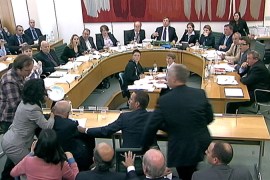 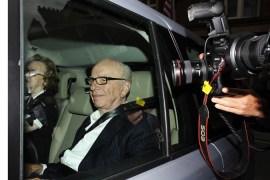 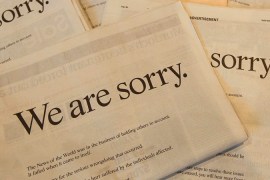