The Taliban has released a video of Pakistan policemen being executed by firing squad after being captured in the northwest, the Pakistani police have said.

A senior police official told the AFP news agency that the video was filmed on June 1, when the Taliban besieged a police checkpost in Upper Dir, about 6km from the border with Afghanistan’s Kunar province.

The footage, parts of which have been aired by Pakistani TV channel Geo and which is available on LiveLeak.com, shows at least 15 men standing on a hillside in traditional civilian dress with hands tied behind their backs.

A commander and other apparently Taliban fighters, also wearing shalwar khamis, but armed with Kalashnikovs and rocket-propelled grenades, stand in front of the apparent policemen, none of whom are wearing uniform.

The commander then delivers a brief speech, declaring the policemen enemies of Islam and deserving of death.

“These are the enemies of Allah’s religion and have left Islam. Allah orders to kill such people,” he says, speaking in the local Pashto language.

“We arrested them in fighting here. They killed six innocent children in [the northwestern valley of] Swat in the same way,” he claims.

The commander and his fighters then open fire on the men. They later pump bullets at close-range into the bodies which are still moving.

Mir Qasim Khan, police chief for Upper Dir district, put the number of victims in the video at 18, saying they were policemen and paramilitary police captured on June 1.

“It was a pre-dawn attack and that’s why most of them are not wearing uniform,” he said.

The Taliban was not reachable for comment on Monday.

Another police official said at the time that 500 fighters, including Afghan and Pakistani Taliban, took part in the attack, which began before dawn on June 1 and continued throughout the next day.

Taliban and other armed groups have carved out strongholds on both sides of the porous Afghanistan-Pakistan border, a region that the United States has called one of the most dangerous places in the world.

Upper Dir borders the region where the Pakistan military waged a major offensive against the local Taliban in Lower Dir, Buner and Swat in 2009. 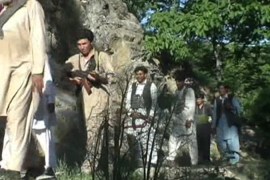 Fighters move freely across mountainous area while focusing their attacks on the country’s security forces. 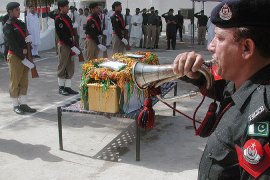 At least 17 people have been killed after about 100 fighters storm a police checkpoint in Peshawar. 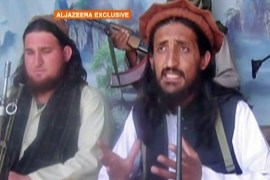