Beji Caid Essebsi, the Tunisian prime minister, has said that a new outbreak of deadly violence in Tunisia is designed to prevent the country holding its first post-revolution elections.

“There were disturbances aimed at preventing elections,” said Essebsi during an address to the nation on Monday. “These elections will be held on October 23 as scheduled.”

Voters will choose a constituent assembly that will write a new constitution that will pave the way for legislative and presidential polls.

The prime minister said that “some parties and marginal groups are not ready for the elections,” pointing to the “strange” timing of the violent incidents that had occurred across the country over the past few days.

Protesters say the new government is not doing enough to create jobs for the country’s 700,000 unemployed and failing to rescue a shrinking economy.

“We’re in a transitional period, the state is weak and other forces are taking advantage,” said Dora Jaafar, a young marketing director.

“Nobody knows where we’re going and this climate is prone to manipulation.”

Tunisia’s official news agency said on Monday that a 14-year-old boy was killed by a stray bullet during a violent protest in the inland town of Sidi Bouzid.

TAP cited the district security chief, Samir Melliti, as saying the teen was hit by a “stray bullet” in clashes between security forces and protesters on Sunday.

The agency said the police and troops fired warning shots to disperse the crowd, which hurled gasoline bombs and stones.

Two other people were wounded in the clashes, one of them seriously, a local medic told the AFP news agency.

“There was major fighting late into the night in Sidi Bouzid and in Regueb,” said Ali Zarai, a local unionist.

Six months after an unprecedented uprising led to the shock ousting of longtime president Zine al-Abidine Ben Ali, many Tunisians fear that the revolution’s achievements are being lost.

“The people of Sidi Bouzid are angry. Six months after the revolution, they still haven’t seen any change and they are demonstrating against the government of Beji Caid Essebsi,” Zarai said.

Sidi Bouzid is the town where street vendor Mohamed Bouazizi set himself on fire on December 17 in protest at police harassment, touching off the uprising that led to the president fleeing the country. 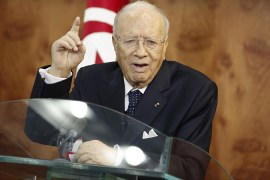 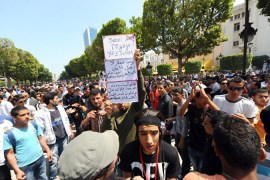 Tunisia sets up electoral body ahead of vote 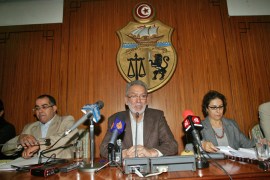