Egypt’s new cabinet is set to be sworn in after a reshuffle that protesters say has only partially satisfied their demands for deeper political and economic reforms.

Protesters, who have camped out in Cairo’s Tahrir Square since July 8, say they want further measures, including a quicker trial of Hosni Mubarak, who was ousted as president on February 11 in a popular uprising.

Mubarak’s state of health was the subject of speculation on Monday after his lawyer said on Sunday that the former president, who has been in a hospital in the Red Sea resort of Sharm el-Sheikh since April, had slipped into coma. Hospital officials and the deputy health minister denied the report.

The new ministers will take the oath of office on Monday in front of Field Marshal Mohamed Hussein Tantawi, the leader of the military council that took control of Egypt after Mubarak’s resignation, the state news agency MENA said.

Tantawi was defence minister under Mubarak for two decades.

State TV dubbed Prime Minister Essam Sharaf’s new lineup the “Revolution Cabinet”. Most of the ministers were relative newcomers in an apparent effort to avoid further criticism by the protesters.

Thousands of Egyptians have returned to Tahrir Square, the epicentre of Egypt’s uprising, complaining that change has come too slow under the military council that took over power.

Even after the reshuffle, many of the protesters in the square said they had no intention of quitting more than a week into their sit-in.

The military council has promised a parliamentary election in September with a presidential vote to follow.

At least 15 ministers, or more than half the cabinet, are being replaced, including those for foreign affairs, finance, military production and trade and industry.

State media said the interior minister, Mansour el-Essawy, was expected to remain. He announced an unprecedented shake-up of top police officers last week in response to criticism of the way police handled the uprising.

“Our problem is with the way the police force works, not with the personalities,” said Ahmed Maher of the April 6 movement, one of the groups driving the protests.

Among the new ministers are Mohamed Kamel Amr, who replaces foreign minister Mohammed el-Orabi, and Hazem el-Beblawi, a 74 year-old adviser at the Abu Dhabi-based Arab Monetary Fund, who replaces finance minister Samir Radwan. Orabi had held his post for less than a month.

Radwan told Reuters the policy-making situation had become “confused” and he believed it best to “leave the way for somebody to handle it in a consistent and coherent manner”.

“People don’t know what they want. Do they want increased expenditure and no borrowing from abroad?

“Everybody has suddenly become an expert on financial policy. That is not an atmosphere conducive to efficient work,” Radwan said.

In the Egyptian media, Mubarak’s condition has been a subject of intense speculation, gaining momentum in the run-up to an August 3 trial.

But protesters in Tahrir Square, the centre of uprising, were unfazed by the report, unfurling a huge banner on Sunday that read: “Mubarak must stand trial”.

The 83 year-old is charged with abuse of power and the killing of more than 840 people who died in the 18 days of demonstrations that led to his removal.

“The news that comes every now and then about him being in bad condition is designed to gain people’s sympathy, especially now with the public demanding he comes to a jail in Cairo and face trial in Cairo, not in his hospital,” Hassan Nafaa, a political analyst and activist, said.

A conviction could carry the death penalty and activists suspect his lawyer may be using health problems as a ruse to sway public opinion and perhaps even win amnesty.

Many Egyptians think the military wants to find ways to avoid humiliating their former commander in public. 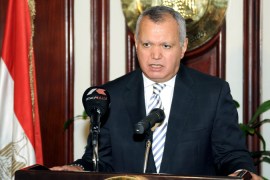 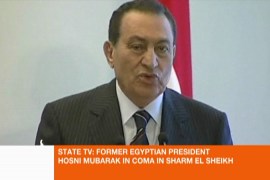 Lawyer says former Egyptian president is in a coma, but the report is denied by the head of Sharm el-Sheikh hospital. 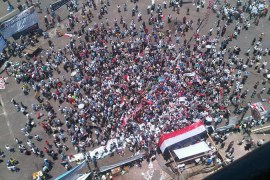 Protesters gather in Cairo’s Tahrir Square, venting anger at the government for its lack of speedy political reform.