Prime Minister Nikola Gruevski was in line to be re-elected for a third term, according to preliminary results, and he declared victory at his party’s headquarters on Sunday.

“With pleasure I can announce that the winner of these elections is VMRO-DPMNE and the Coalition ‘For a better Macedonia.’ We have won 55 seats in the parliament,” which has 123 seats, Gruevski told reporters.

According to preliminary results posted on the official site of the electoral commission, votes from 81.77 per cent of polling stations gave the ruling VMRO-DPMNE conservative party the edge over the opposition Social
Democrats, with 39.31 per cent to 32.71 per cent.

Final results will be known on Monday.

Gruevski had called the election a year before the end of his four-year term, following the opposition’s walkout from the legislature. It was sparked by the jailing of a popular television channel’s boss and the freezing of his bank accounts.

Voting passed peacefully in polls the country hopes will put the drive towards membership of the European Union and NATO back on track.

By the time voting ended at 7pm on Sunday, there had been more than a dozen reports of minor voter intimidation and proxy voting, but no major incidents.

Voting was monitored by about 3,500 local and 330 international observers.

In the run-up to the election, both the VMRO-DPMNE and the main opposition Social Democrats (SDSM) accused each other of plotting election-day violence.

Western powers watched the campaign closely after warning Macedonia’s leaders that the country’s EU and NATO membership ambitions depended on the conduct of the elections.

Diplomats noted media reports that civil servants had been threatened with losing their jobs if they did not vote for the ruling party.

“There is too much at stake. If any of those predictions come true, this small country is risking its future. The EU will be further off than ever,” a senior Western diplomat told reporters.

About 7,000 police officers patrolled polling stations, and police warned politicians there would be harsh penalties for any attempts at election violence or fraud.

One person was shot dead and several were wounded in an election-related incident in an ethnic Albanian area during the 2008 elections.

The VMRO-DPMNE, led by Gruevski, has accused the opposition of planning to allege fraud and to organise violent street protests if they lose.

The opposition Social Democrats said the ruling party was seeking an alibi after intimidating voters during the campaign.

The VMRO-DPMNE led in the polls but was not expected to get enough votes to form a stable government. The high turnout raised hopes among opposition parties that they had gained the support of many previously undecided voters.

Experts say the winner will have to seek a coalition partner, probably the party that wins the most votes among ethnic Albanians, who make up one-third of the population of two million.

The new government will face the task of reviving the economy and fighting unemployment and poverty, as well as speeding up the country’s drive to join the EU and NATO. 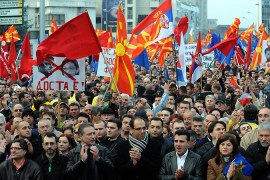 Thousands march against the conservative government, saying it has failed on the economy and obtaining EU accession. 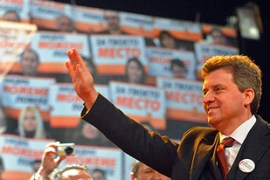 The elections are critical for Macedonia’s attempts to join the EU and Nato. 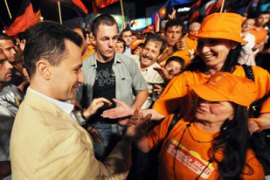 General election under way after attacks on members of an ethnic Albanian party. 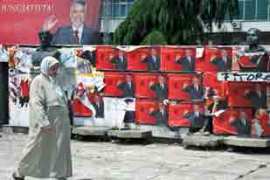