Yemen’s prime minister and other senior officials hurt in an attack on the presidential palace have been transferred to Saudi Arabia for treatment, the state news agency SABA says.

But the condition of Ali Abdullah Saleh, the president, was “of no cause for concern”, a medic told AFP news agency on Saturday, after officials said he was “lightly wounded in the back of the head”.

Shells hit a mosque in the presidential palace compound on Friday as officials, including Saleh, were praying.

Saleh was “stable” and treated at a hospital in the capital, Sanaa, the medic said, while other injured officials, including the speakers of both houses of parliament, were taken to neighbouring Saudi Arabia, where hospitals are better equipped than in Yemen.

Hisham Sharaf, minister of trade and industry, said he met Saleh on Friday night and that the president remained defiant in the face of escalating violence.

“He was in very high morale. The strike that doesn’t break you makes you stronger. The strike made him more adamant that he won’t hand over the country until he is sure it will be safe and clear of militias,” Sharaf said.

In an audio address delivered on state television late on Friday night, Saleh said the strike, where “seven officers were martyred”, was carried out by an “outlaw gang”, referring to the Hashed tribal federation led by Sadiq al-Ahmar, a powerful dissident tribesman.

Al-Ahmar’s fighters have been battling government forces in the capital since a truce crumbled on Tuesday.

Witnesses said sporadic shelling and rocketfire on Saturday rattled the al-Hasaba district of northern Sanaa where al-Ahmar has his base, forcing residents to flee. The area is suffering from water and electricity cuts.

Elsewhere in Yemen, officials said police and military units have withdrawn from the southern city of Taiz after a week of clashes with pro-reform demonstrators that left dozens dead.

“Looting and scenes of chaos are spreading after the withdrawal of security forces and the army from the city,” the opposition leader, who asked not to be named, told Reuters news agency.

Tareq al-Shami, a ruling party official, confirmed the government’s security forces had pulled back from the city which is about 200km south of the capital.

The UN human rights chief said her office was investigating reports that as many as 50 have been killed in Taiz since Sunday.

Abdul Ghani al-Iryani, an independent political analyst in Sanaa, told Al Jazeera that it was “quite reasonable to assume” that al-Ahmar’s fighters were behind the palace hit on Friday.

“[The tribesmen] probably wanted him to know that [Saleh] can no longer attack them with impunity, and that they can reach him as he can reach them,” al-Iryani said.

But al-Ahmar’s office denied responsibility and instead blamed Saleh for the attack, calling it part of his effort to help justify a government escalation of street fighting in the capital.

Ten people were killed and 35 others injured in southern Sanaa on Friday as Yemeni troops shelled the home of Hamid al-Ahmar, the brother of Sadiq al-Ahmar, Hamid’s office said on Saturday.

The shelling in Hada neighbourhood also targeted the homes of Sadiq’s two other brothers, Hemyar and Mizhij, and that of Ali Mohsen al-Ahmar, a dissident army general.

The US has condemned Friday’s violence, including the attack on the Saleh’s palace, and called for him to transfer power.

“We call on all sides to cease hostilities immediately and to pursue an orderly and peaceful process of transferring political power as called for in the GCC-brokered agreement,” the White House said, referring to the Gulf Co-operation Council.

Yemen’s parliamentary opposition on Saturday called for an “immediate” ceasefire.

The Common Forum alliance condemned what it said was the “the dangerous twist which the clashes have taken in targeting the homes of citizens, the presidential palace, and vital installations”.

The alliance of parliamentary opposition groups urged “quick action” from the international community “to save Yemen and its people from falling into [civil] war”, in the statement. 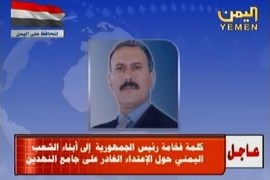 Ali Abdullah Saleh delivers an audio speech after surviving an attack on his palace in Sanaa that killed seven officers. 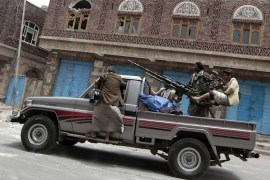 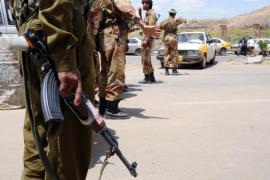 Saleh: Suppressing opponents from within

In Yemen, president’s regime has long used torture as part of its “security apparatus”. 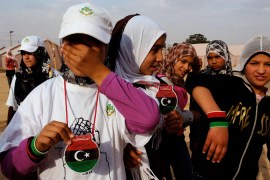 The unbearable lightness of killing

Earth to Gaddafi and Saleh: Your time is up, stop murdering your people.