The International Criminal Court has issued arrest warrants for the Libyan leader Muammar Gaddafi, his son and his spy chief, citing evidence of crimes against humanity committed against political opponents.

Judge Sanji Mmasenono Monageng announced the decision on behalf of a three-judge panel in The Hague on Monday, saying the warrants were meant to force Gaddafi and his two confidantes to appear before the court and prevent the possibility of a cover-up.

It was the second time in the ICC’s nine-year history that it issued an arrest warrant for a sitting head of state. The ICC indicted the Sudanese president, Omar al-Bashir, in 2009, though he has yet to be arrested.

“State policy was designed at the highest level of the state machinery, and aimed at quelling by any means, including by the use of lethal force, demonstrations of civilians against the regime of Muammar Muhammad Gaddafi,” Monageng said.

She stressed that the indictment and warrants for Gaddafi, his son Saif al-Islam, and his military intelligence chief Abdullah Senussi were not proof of guilt, which must be proved at trial.

But she said the evidence submitted by Luis Moreno-Ocampo, the ICC prosecutor, was enough to establish “reasonable grounds to believe” the three were guilty of murder and the persecution of civilians, or “crimes against humanity”, and that they should be arrested.

Libya dismissed the move by the ICC, rejecting the authority of the tribunal.

“Libya … does not accept the decisions of the ICC which is a tool of the Western world to prosecute leaders in the Third World,” Mohammed al-Qamoodi, the Libyan justice minister, said in Tripoli.

“The leader of the revolution and his son do not hold any official position in the Libyan government and therefore they have no connection to the claims of the ICC against them.”

Gaddafi holds no formal office in Libya’s political system despite having ruled for more than 41 years.

Earlier, the head of Libya’s opposition National Transitional Council hailed the ICC arrest warrant against Gaddafi, vowing to bring the strongman to justice.

As residents of Benghazi greeted the news from The Hague with a hail of airborne-gunfire and blasts of car horns, Mustafa Abdel Jalil welcomed the move by saying “justice has been done”.

“The decision that was made today by the International Criminal Court stops all suggestions of negotiations with or protection for Gaddafi,” he said.

Jalil also vowed to bring Gaddafi to task for crimes committed before the February uprising, but ruled out suggestions that a foreign force would be needed to catch him.

“We will do all we can to bring Gaddafi to justice … The Libyan people are able to implement this decision,” Jalil said.

Al Jazeera’s Zeina Khodr, reporting from the opposition stronghold of Benghazi, said that some people in the city thought it was too early to celebrate any victory.

“Yes, the rebels, the opposition here in Benghazi, are hailing the decision as a success. For them this is an important day when justice is finally served,” she said.

“But now, even the National Transitional Council in Benghazi made it clear that the door has been shut to any peaceful political settlement of this conflict. They are worried that Gaddafi, who now is a prisoner in his own country, will fight until the end, until death.”

Beginning on February 15, when demonstrations first broke out, and continuing until at least February 28, Monageng said, Libya’s security and military forces killed or imprisoned hundreds of perceived dissidents in Tripoli, Misurata and Benghazi, along with a number of other cities.

Those security forces followed “a consistent modus operandi … an attack against the civilian population,” she said.

Gaddafi had “absolute and unquestioned control over the Libyan state apparatus of power,” while Saif al-Islam – his second-oldest son and “unspoken successor” – functioned as a “de factor prime minister” and controlled the state’s finances and logistics, she said.

Senussi, meanwhile, “exercised his role as the national head of military intelligence, one of the most powerful and efficient organs of repression,” Monageng said.

She said that Senussi personally commanded regime forces and ordered them to attack civilians during the fighting in Benghazi, which lasted between February 15 and 27 and ended when the local military base known as the Katiba fell into anti-government hands. Senussi and some of his men were reportedly allowed to escape after negotiating with troops who had defected to the protesters’ side.

Luis Moreno-Ocampo, the ICC’s chief prosecutor, submitted a 74-page dossier of evidence to the panel on May 16, requesting arrest warrants for Gaddafi, his second-eldest son, Saif al-Islam, and his intelligence chief, Abdullah Senussi.

The ICC’s decision coincides with the 100th day of NATO operations in Libya. International military intervention succeeded in turning back Gaddafi’s advance on rebel-held cities, but opposition forces have made few advances since air strikes began on March 19.

Gaddafi has refused calls to step aside and has issued defiant video and audio messages from undisclosed locations, calling the intervention a “crusade” against his country and an attempt by the West to recolonise Libya. He is believed to still be in Libya, along with Saif al-Islam and Senussi.

Ocampo had sought indictments for all three on charges of crimes against humanity. He alleged that the three met and planned a brutal crackdown against protesters who took to Libya’s streets in mid-February, emboldened by uprisings in nearby neighbouring Tunisia and Egypt.

Gaddafi and Senussi personally issued orders to attack protesters, and Saif al-Islam helped organise the recruitment of mercenaries to put down what became an armed rebellion based out of the country’s east, Ocampo said.

Security forces and mercenaries attacked civilians in their homes, used heavy weaponry on funeral processions, and set up snipers to shoot at worshippers leaving mosques, he said.

Ocampo’s investigation focused on incidents in Benghazi, Misurata and Tripoli from February 15-20. Benghazi successfully overthrew government control in mid-February, while Misurata held out against an oftentimes indiscriminate attack by regime troops for months, only breaking out of its siege in May.

Gaddafi’s security forces successfully stifled dissent in Tripoli, the capital, but unrest in the form of enormous petrol-line queues, sporadic demonstrations and occasional night-time assassinations has begun to grow.

Thousands have so far died in the fighting, while around 650,000 others have fled the country. Another 243,000 Libyans have been displaced internally, according to figures from the United Nations.

The UN Security Council referred the Libyan conflict to the ICC on February 26, and Ocampo launched his investigation five days later.

It is unclear what practical effect the arrest warrant will have on the three men. Gaddafi has made no public indication he is willing to give up power, and the warrant against Bashir seems to have little chance of being enforced: Bashir has travelled to Qatar, Chad and Egypt without incident. 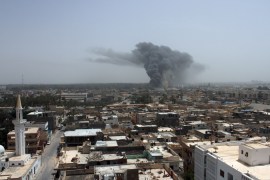 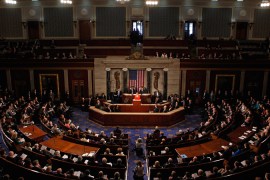 House protests over US role in Libya

Symbolic vote a rebuke for Obama but will not affect US involvement in operation as House rejects cutting mission funds. 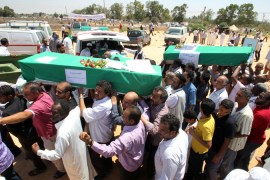 Capital Tripoli hit in fresh raid as state TV reports that 15 people were killed in Brega. 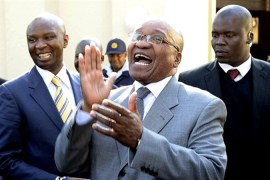