Up to 1,000 Syrians have fled across the border into Lebanon over the past two days in a bid to escape the escalating violence in Syria.

A Lebanese security official said on Saturday that those crossing had entered northern Lebanon near the border town of Wadi Khaled, a day after activists said 20 people were killed in anti-government protests in Syria.

He said six of those coming through the al-Qusayr crossing had gunshot wounds and had been taken to hospital.

Al Jazeera’s Rula Amin, reporting from the Lebanese capital, Beirut, said the number of Syrians fleeing to Lebanon was increasing but could not be compared to the situation on the Turkey-Syria border, where nearly 12,000 people are sheltering on the Turkish side.

“It is important to remember that Syria has a lot of influence in Lebanon and that the regime still can reach people here,” she said.

“If you’re an opposition figure or an activist trying to flee the regime, Lebanon is not exactly the place to go to.

“But still, these people are still coming into Lebanon and they’re being sheltered by Lebanese families and even some Lebanese politicians and activists who are giving them food and a place to stay.”

Meanwhile, the head of the Syrian Red Crescent said that Syrian refugees in Turkey will not face retribution or
interrogation if they return to their country, Turkey’s Anatolia news agency reported.

“We, as the Red Crescent, guarantee that the Syrian government will not call [the refugees] to account and under no circumstances will security forces take decisions about them,” Abdurrahman Attar was quoted as saying.

“With the comprehensive amnesty declared, they would not be interrogated.”

Even as reports of refugees starting to trickle in to Lebanon surface, our correspondent in Lebanon said that the situation there is far tenuous for Syrians fleeing crackdowns.

Unlike Turkey, Lebanon is not prepared to take large numbers of Syrian refugees, said Amin.

“They have a lot of influence here, and it’s just across the border.”

Syrian President Bashar al-Assad on Tuesday ordered a general amnesty in a bid to quell rising unrest, and has urged refugees to return home, saying their hometowns have been cleared of “armed gangs”.

But residents of the northern Syrian town of Jisr al-Shughur and other towns where the military has carried out operations said the regime’s claims of “outlaws ” stirring unrest were baseless and have been used as a pretext to crack down on dissent.

On Saturday, mourners gathered for the funeral of one of six protesters activists said had been killed a day earlier in the Damascus suburb of Kiswah.

An activist at the scene told Al Jazeera that at least 20,000 people took part in the burial and that there was a heavy security presence in the area.

Opposition activists said 20 people were killed and many more injured in demonstrations across the country following Friday prayers.

People had barely come out of the Ibn Affan Mosque in Kiswah, chanting for the toppling of the regime when security forces opened fire on the crowd, killing five people and wounding others, Mohammed Suliman, a human rights activist, said.

Activists also claimed as many as five more people had been killed in the Damascus neighbourhood of Barzeh.

“Security forces tried to break up a rally calling for the fall of the regime with tear gas before opening fire,” killing five people and wounding 25, an activist in Barzeh said.

Activists said dozens of people in Barzeh were arrested in house-to-house searches as a curfew was imposed on the neighbourhood.

Al Jazeera is unable to verify reports from Syria because of restrictions on reporting in the country.

The military crackdown, which activists say has left more than 1,300 people dead, has failed to silence anti-government protests that have now lasted more than 100 days.

Although Syrian opposition figures have told the AFP news agency that they plan on holding a meeting in Damascus on Monday, the 100 or so participants have no ties to political parties.

Meanwhile, international condemnation of Syria’s government has been mounting steadily in recent weeks.

The European Union on Friday extended sanctions against those supporting the government crackdown, including three members of Iran’s Revolutionary Guard.

Turkish foreign minister Ahmet Davutoglu told reporters on Friday that he had conveyed Turkey’s “concerns and thoughts” about the situation at the border in a telephone conversation with his Syrian counterpart.

He said he would continue to talk to Syrian officials to ensure that “reforms and peace are brought about as soon as possible”.

“We hope that Syria is successful in renewing itself in a stable manner and comes out of the situation stronger. We will do all that we can to help,” he said. 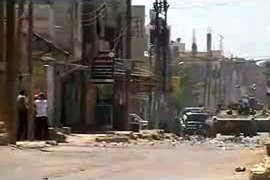 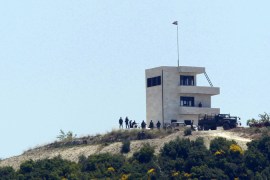 US ‘concerned’ at Syria border move 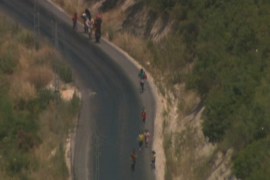 Hundreds more cross the border into Turkey as security forces sweep through Khirbet al-Jouz and nearby villages.

Hundreds of Syrian refugees reportedly crossing the border as troops and tanks approach their makeshift camps.