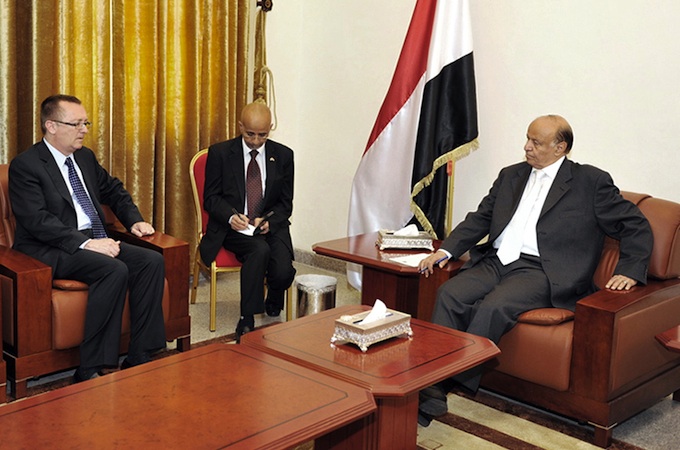 A senior US state department official has called for an “immediate” transfer of power in Yemen after a meeting with the country’s vice president and acting leader.

Jeffrey Feltman, the US assistant secretary of state for near eastern affairs, told reporters on Thursday that Yemeni president Ali Abdullah Saleh should approve a quick transition to a new government.

“We continue to believe that an immediate, peaceful, and orderly transition is in the best interest of the Yemeni people,” Feltman said. “We urge all sides to engage in dialogue that peacefully moves Yemen forward.”

Feltman again endorsed a plan created by the Gulf Cooperation Council (GCC), under which Saleh would relinquish power within 30 days in exchange for immunity from prosecution. Saleh refused to sign the deal on several occasions.

An unnamed Yemeni official told the Reuters news agency that his government would only sign the agreement if nationwide popular protests stop.

“The American side insisted on implementing the [GCC] initiative and then removing areas of tension,” the source said, referring to the protests which continue across the country.

“The Yemeni side demanded that areas of tension be removed first, and then they will implement the initiative.”

Feltman’s remarks came after a meeting on Wednesday with Abd-Rabbu Mansour Hadi, Yemen’s vice president. Hadi has been at least nominally in charge of Yemen since Saleh travelled to Riyadh for medical treatment earlier this month. Saleh was injured in an explosion at his palace mosque.

It is unclear just how much power Hadi has, though: Several of Saleh’s powerful relatives – including his son Ahmed, the commander of the Republican Guard – are still in Yemen and reportedly making many of the decisions.

Officials from the ruling General People’s Congress have insisted for weeks that Saleh’s return is imminent. Ahmed al-Soufi, a senior adviser to Saleh, said on Tuesday that the president would return this weekend.

But previous predictions of Saleh’s return have proved false, and the president himself has not made any public appearances since traveling to Riyadh.

He reportedly suffered from burns over 40 per cent of his body, a collapsed lung, and other injuries, and underwent several surgeries in Saudi hospitals.

General Ali Mohsin, the commander of Yemen’s first armoured division and a longtime rival of the president, said in an interview with the New York Times that he was unsure if Saleh planned to return.

His visit coincides with a prison break in the southern city of Mukalla, in which 40 inmates escaped – some of them allegedly members of al-Qaeda in the Arabian Peninsula