Turkey’s main pro-Kurdish party has decided that all its candidates elected in a June 12 vote will boycott parliament, according to the CNN Turk news channel.

The move by the Kurdish Peace and Democracy Party (BDP), announced on Thursday, could trigger by-elections and raise tensions in the Kurdish southeast.

The decision came after Turkey’s Supreme Election Board (YSK) stripped a Kurdish deputy of his newly won seat in parliament on Tuesday because of a prior conviction on a charge of spreading terrorist propaganda.

Serafettin Elci, a BDP spokesperson, was quoted by Cumhuriyet, one of Turkey’s biggest daily newspapers, as saying: “We are taking a stance in the name of democracy.”

Hatip Dicle, one of 36 Kurdish-backed BDP candidates to win a seat in a parliamentary election in June, lost an appeal this month against a 2010 conviction for spreading terrorist propaganda, which resulted in an 20-month sentence.

Any terrorism-related conviction carrying a sentence of more than a year makes the recipient ineligible for parliament.

Dicle is one of six new parliamentarians now in prison while on trial for links to the outlawed Kurdistan Workers’ Party (PKK).

The others are not at risk of losing their seats.

The election board awarded Dicle’s seat to a candidate from Recep Tayyip Erdogan’s AK Party, bringing its tally to 326 seats – a step to closer to the 330 needed for parliamentary approval to call a referendum on constitutional reform.

Dicle, who won his seat in Diyarbakir, the largest city in the predominantly Kurdish southeast, said he would appeal against the election board’s decision.

BDP candidates stood as independents in the election to bypass a threshold of 10 per cent support that parties must cross to enter parliament.

They boosted their support from 22 seats in the previous election, a signal that Turkey’s Kurds want more autonomy and reforms to help end a 27-year armed uprising led by the PKK in which 40,000 people have died.

With Dicle banned from entering parliament, the election board will discount his votes and allocate his place to the candidate who most narrowly missed out on one of the 11 seats for Diyarbakir.

The Election Board was separately expected to decide on Thursday on the eligibility of three other candidates, Mustafa Balbay, a journalist, and Mehmet Haberal, a physician, of the main opposition Republican People’s Party (CHP), and Engin Alan, a retired general who won a seat for the far-right Nationalist Movement Party (MHP).

The two CHP candidates have both been remanded in custody in the Ergenekon case, an investigation into an alleged secular-nationalist network accused of aiming to overthrow the government after the 2002 election, when the AK Party won for the first time.

The MHP candidate is a suspect in the Sledgehammer case, an alleged military plot to topple the government in 2003. 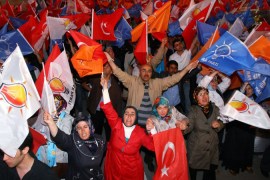 One of the fastest-growing economies in the world, Turkey gazes in many directions to become the superpower it once was. 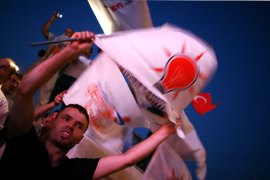 The AKP’s success may signal a new dawn for Turkey, but challenges remain before Erdogan can take his place in history. 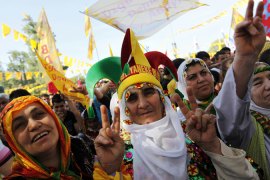