Indonesia has barred its citizens from travelling to Saudi Arabia to work, amid a spat with Riyadh over the beheading of an Indonesian maid in the kingdom for alleged murder.

Susilo Bambang Yudhoyono, the Indonesian president, on Thursday condemned the beheading and accused Riyadh of breaking the “norms and manners” of international relations.

“I decided to apply a moratorium on sending Indonesian workers to Saudi Arabia, to be in effect on August 1, but starting from today, steps toward this have begun” he said in a live TV address.

The moratorium will apply “until Indonesia and Saudi Arabia can come to an agreement to give rights necessary for Indonesian workers,” he added.

Yudhoyono’s comments reflect Indonesia’s growing anger over the abuse and maltreatment that many of its citizens have to endure while working in the Gulf countries.

Ruyati binti Sapubi, 54, was executed by sword after being convicted of  murdering her Saudi employer, Khairiya bint Hamid Mijlid, with a meat cleaver for not being granted leave to visit home.

Furious over her execution, Jakarta has recalled its ambassaor to Saudi Arabia for “consultations”.

The execution also prompted calls from Indonesian rights activists for the scrapping of the death penalty. Indonesia carries out executions by firing squad.

There are about 1.2 million Indonesian migrant workers in Saudi Arabia, most of them working as maids, who are a valuable source of foreign exchange reserves and help reduce unemployment in Southeast Asia’s leading economy. 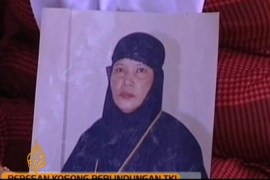 Furore over Indonesian’s beheading in Saudi 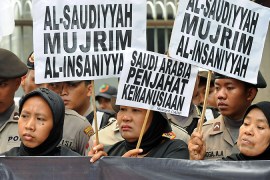 Employer sentenced to three years in jail for beating Indonesian housemaid in a case that sparked international outcry. 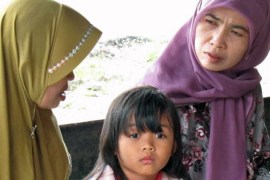 Many Indonesian migrant workers end up in Malaysia where some become victims of physical and sexual abuse.

Growing calls within the country to stop sending migrant workers to Saudi Arabia after two cases of alleged torture.