Twenty-three people have been killed and at least 100 others injured by three bomb explosions in southwest Baghdad, Iraqi officials say.

Two police officials said the bombs targeted a Shia Muslim mosque as well as a market on Thursday evening.

“There were a lot of people at the market because it is Thursday, the evening before the weekend”, which begins on Friday.

An employee of Baghdad’s Yarmouk hospital confirmed the casualty figure of 21.

Al Jazeera’s Rawya Rageh, reporting from Baghdad, said: “The perpetrators used three wooden carts which are common for carrying vendor materials to and from the market.

An Iraqi resident, Jabir Ali, said he was about 200 yards away when one of the bombs went off near a barber shop where his cousin works.

”I saw many people killed and injured,” Ali said. “I went to see my cousin. The glass at his shop was broken and he was injured in his head, chest and hand by the glass.”

There was no immediate claim of responsibility for the blasts, but armed anti-government groups like al-Qaeda in Iraq generally tend to target Shia mosques and neighbourhoods.

In one, a car bomb targeted street vendors in the city’s southern Dora neighbourhood, killing two people and injured 10 others.

The other blast targeted an army patrol in the Jamaa neighbourhood. Three Iraqi soldiers were injured and an army vehicle sustained damage.

Earlier on Thursday, an American aid worker was killed in Baghdad, a US embassy official said.

“An American civilian working with an implementing partner of the United States Agency for International Development in Iraq was killed in a terrorist attack today in Baghdad. Three additional civilians were wounded in the attack, including one American citizen,” David Ranz, the spokesperson for the US embassy, said.

The US state department later released a statement identifying the victim as Stephen Everhart and condemning the attack.

“Dr Everhart was an American citizen who was working in Iraq for an implementing partner of the United States Agency for International Development’s Mission in Iraq.

“He was killed while working on a project to introduce a new business curriculum to a Baghdad university in a program supported by the Iraqi Ministry of Higher Education.” 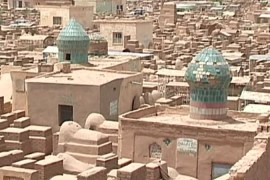 Iraqis make a living among the dead

The Najaf cemetery has become a refuge for families displaced by poverty and violence. 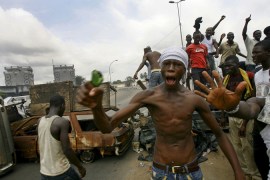 An index of troubled countries reveals the common threads that lead to suffering around the world. 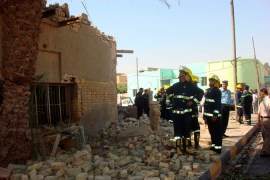 At least 21 people killed in explosion outside home of local official in central Iraq.