Dozens of alleged al-Qaeda fighters have escaped from a prison in southern Yemen, according to security officials.

Up to 40 inmates attacked the guards and seized their arms early on Wednesday, as bands of heavily armed gunmen attacked the prison in the port city of Mukalla in Hadramout province, the Associated Press news agency citing security officials said.

Local sources told Al Jazeera at least one prisoner and a policeman were killed in exchange of gunfire.

Officials said those who escaped included fighters convicted on terror charges or held in protective custody pending their trial.

Wednesday’s jailbreak is the latest sign that Yemen’s uprising has emboldened al-Qaeda fighters to challenge authorities in the country’s nearly lawless south.

The last major jail breakout by al-Qaeda fighters in the country took place in 2006, when 23 prisoners escaped a Sanaa detention facility.

Ali Abdullah Saleh, the Yemeni president, is in Saudi Arabia for medical treatment after he was badly injured in an attack on his presidential palace last month.

The al-Qaeda fighters are presumably taking advantage of Saleh’s absence, which has created a power vacuum in the country.

But opposition activists, seeking Saleh’s ouster, say the regime is deliberately raising the bogey of al-Qaeda to discredit the anti-government uprising.

Government officials said on Monday at least 12 fighters linked to al-Qaeda were killed in gun battles with the Yemeni army in the city after it launched an offensive to retake the town. 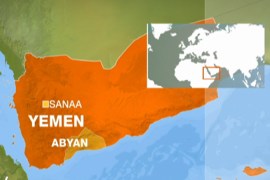 Fighters killed as troops battle to retake southern city of Zinjibar, as protests against president continue in capital. 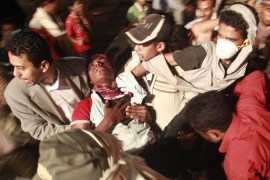 At least 30 people reported killed in strikes on city of Zinjibar, which is said to be held by al-Qaeda-linked fighters. 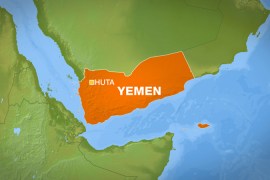 At least two killed and five wounded in fierce fighting between attackers and security forces in southern town of Huta. 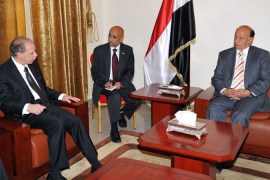 US newspaper says the move is aimed at preventing suspected fighters from consolidating power in strife-torn nation.