The Syrian president, facing three months of protests against his rule, has said a national dialogue will start soon but cautioned that no political solution was possible with people who were violent or carried arms.

In a speech at Damascus University on Monday, Bashar al-Assad said he would ask the justice ministry to study expanding a recent amnesty, but said it was important to differentiate between “saboteurs” and people with legitimate demands.

This was his third major speech since protests demanding greater freedoms and democratic reforms erupted in Syria in mid-March.

Assad said his government was instituting a process of “national dialogue” through an authority designated for the purpose. He said that about 100 people from various backgrounds had been invited to take part in the process.

He stressed the “historic” nature of the current crisis, promising his “total commitment” to wide-ranging reforms in several sectors, from politics to freedom of the media, and went as far as to say that he was in favour of the drafting of a new constitution for the country.

He said that his country had been the target of “foreign conspiracies” for “geopolitical and […] other reasons”, and that those who were taking part in the current unrest were divided into three broad categories, in his opinion: those who were peaceful and had legitimate concerns; those who were “vandals” and “outlaws” [he said there were 64,000 of these]; and finally “radical and blasphemous intellectuals”.

He said the demands of the first group should be met by the state. He characterised some of those calling for reforms as wanting a return to a “period of confrontation” with the Muslim Brotherhood, which he called a “dark period”.

Assad said that he had met people who were calling for reforms, including both those who took part in protests and those who did not, and it was on the basis of these conversations that he was speaking.

He said his government wished to have Syria “return to a normal way of life” and for the military to “return to its barracks”, but that “vandals” had caused unrest which created a situation which was beyond the capacities of the police.

He repeatedly stated the country was at a historic crossroads, and that the legal framework of the state needed to be changed.

While Assad spoke broadly of constitutional and electoral reform, he refused to name specifics, saying only that “committees” should come up with proposals for this based on the process of national dialogue that he has suggested.

He also said that there could be no reform at a time of “sabotage and chaos”. He said that no political solution was possible as long as protesters were “violent” or carried arms.

He also decried corruption in the state, and said that it needed to be rooted out, adding that the biggest danger facing the country was the weakness or collapse of its economy.

Assad also called on Syrian refugees in Turkey to return to the country, saying that the military was in place to protect them.

Al Jazeera’s Anita McNaught, reporting from a camp in Turkey for Syrian refugees, however, said the Syrian president’s remarks did not go down well with those present.

She said the refugees told her that they were “offended” by Assad’s tone, and with the lack of specifics in terms of timelines and the nature of reforms.

Anti-Assad demonstrations were seen to erupt at all three refugee camps for Syrians in Turkey. The president had specifically asked residents of Jisr al-Shughur to return to Syria. When asked what one resident of the town thought of this plea, he said: “Come back? He wants us to come back so that he can finish us off!”

Speaking to Al Jazeera, Fares Brazat, director of the public opinion programme at the Arab Centre for Research and Policy in Doha, Qatar, termed Assad’s address a “speech of denial”.

He said Assad had an opportunity to gain some favour if he actively pursued his promise of accountability for people involved in deaths during the unrest.

Al Jazeera’s Rula Amin, reporting from Beirut, the Lebanese capital, said that Syrian activists were disappointed with the speech, and that they had been expecting more concrete reforms.

“They say it is not enough,” she said.

After the speech ended, protests against the president’s statement were taking place in several major cities, including Latakia, Hama and suburbs of Damascus.

Assad first addressed parliament on March 30, two weeks after the start of the anti-regime demonstrations,  calling the deadly unrest a “conspiracy” fomented by the country’s enemies. It was a charge he repeated in Monday’s address.

Speaking ahead of a meeting of European foreign ministeers in Luxembourg on Monday, William Hague, the British foreign secretary, said that his country wanted Assad “to respond to legitimate grievances, to release prisoners of conscience, to open up access to Internet and freedom of the media.”

Hague also indicated that the United Kingdom was expecting Turkey to “bring every possible pressure to bear on the Assad regime with a very clear message that they are losing legitimacy and that Assad should reform or step aside”.

The EU’s chief diplomats are expected to adopt a resolution widening sanctions on members of the Syrian government.

Also speaking on Monday, Ersat Hurmuzlu, an adviser to Abdullah Gul, the Turkish president, was quoted by Al Arabiya as saying his government was willing to give Assad up to one week to implement reforms.

“The demands in this field will be for a positive response to these issues within a short period that does not exceed a week,” Hurmuzulu said.

However, Hurmuzlu later told Al Jazeera he had been misquoted and never said such a thing.

International opinion on how to deal with the Syrian crisis is divided, however, and in an interview with the Financial Times, Dmitry Medvedev, the Russian president, said that his country would use its veto to block any United Nations Security Council resolution that could justify military intervention in the country.

“What I am not ready to support is a resolution [similar to the one] on Libya because it is my deep conviction that a good resolution has been turned into a piece of paper that is being used to provide cover for a meaningless military operation,” he said, according to a transcript released by the Kremlin.

“There will not be such a resolution. Russia will use its Security Council permanent member rights,” he said.

Syrian opposition activists announced on Sunday that they were setting up a “National Council” to spearhead the struggle against his regime.

“We announce the creation of a National Council to lead the Syrian revolution, comprising all communities and representatives of national political forces inside and outside Syria,” reporters near the Turkish-Syrian border were told by Jamil Saib, a spokesperson, on Sunday.

The activists urged opposition forces “to co-operate in all cities and provinces of Syria to achieve the legitimate goal of overthrowing the regime and bringing it to justice”.

“The purpose of this council is to bring together opposition forces to support the revolution” and ensure that they are heard by the international community, Saib told the AFP news agency.

On the ground, Syrian forces swept through a northwestern border region to stem an exodus of refugees to Turkey that is raising international pressure on Assad, witnesses and a rights activist said on Sunday.

Ammar al-Qurabi, a Syrian human-rights campaigner, accused pro-government forces of attacking people who were helping refugees who were trying to escape from a widening military campaign to crush protests against Assad’s rule.

“The Syrian army has spread around the border area to prevent frightened residents from fleeing across the border to Turkey,” Qurabi told the Reuters news agency.

“Militiamen close to the regime are attacking people in Bdama and the surrounding areas who are trying to deliver relief and food to thousands of refugees stuck along the border and trying to flee.”

His statements could not be independently confirmed, but a local resident backed up his account.

In another development, Jakob Kellenberger, the president of the International Committee of the Red Cross, is in Damascus for two days of talks to discuss expanding his agency’s relief efforts with Syrian officials. 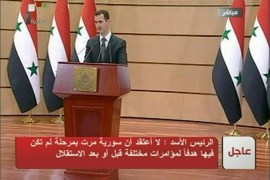 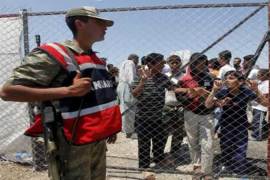 Witnesses say troops backed by tanks and machine guns have swept into Bdama, a town close to the Turkish border. 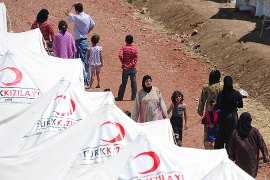 Amid a persistent military campaign, head of International Red Cross to visit Syria for talks on expanding aid effort. 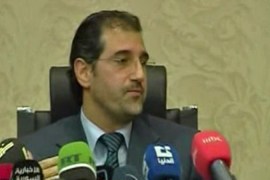 Tycoon Rami Makhlouf, under sanctions for corruption, moves to charity in apparent concession to protesters.