Residents and a Syrian rights group said on Thursday dozens of tanks and personnel carriers also deployed around Khan Sheikhun, a town about 30km south of Maarat al-Numan on the main north-south highway linking Damascus and Aleppo.

“Dozens of tanks, armoured cars, personnel carriers and army trucks have been deployed at entrance points to Khan Sheikhun, and soldiers have started going in” to the northwest town near Hama, said rights activist Rami Abdulrahman.

Despite being globally condemned, al-Assad has continued to send troops to flashpoint cities and towns to suppress protests against his one-party rule.

Syrian rights groups say 1,300 civilians and more than 300 soldiers and police have been killed since the protests, inspired by Arab uprisings which toppled leaders in Egypt and Tunisia, broke out in March against 41 years of rule by the Assad family.

The latest focus of the crackdown has been in the northwest of the country, around the town of Jisr al-Shughur where authorities say 120 security personnel were killed earlier this month.

The Khan Sheikhun deployment marks a continuation of military operations in the province of Idlib, where forces have targeted Ariha, Maarat al-Numan, Jisr al-Shughur and its surroundings, an activist said.

The crackdown has forced thousands of refugees to stream north across the border into Turkey.

Maarat al-Numan’s residents said thousands of people headed to Aleppo and to Turkey, adding to a refugee flow that started in anticipation of the military assault on Jisr al-Shughur.

Syria’s official state news agency said on Wednesday thousands of people were returning to Jisr al-Shughur. However, Turkish officials said 8,900 Syrians, many from that town, were still in Turkey, which has set up four refugee camps.

“We are hearing that they are calling for people to return, but we know that we will die if we go back,” said a refugee on the Turkish side of the border who gave his name as Ahmed.

“I am not planning to go back unless Bashar al-Assad falls,” said Abdulkadir, a 28-year-old refugee, who fled from a village near Jisr al-Shughur two days ago. Another 10,000 refugees were sheltering inside Syria close to the border.

Meanwhile, Ahmet Davutoglu, the Turkish foreign minister, held three hours of talks with Syria’s special envoy Hassan Turkmani on Thursday morning and called for an immediate end to the crackdown.

“In order to achieve this, the violence must stop immediately. Yesterday I clearly saw the fear in the eyes of the people and I shared this,” he said in Ankara, a day after he visited a border camp in Yayladagi, about 20km from Jisr al-Shughur, and talked to refugees.

Turkish authorities have tightened control over the border, making it harder for Syrians to cross unofficially.

A Turkish Red Crescent official, who requested anonymity, said more tent camps were being prepared at the eastern end of the 800km border, near the Turkish city of Mardin, far from where the current influx of refugees is concentrated.

Fleeing refugees described shootings by troops and gunmen loyal to al-Assad, known as “shabbiha”, and the burning of land and crops in a scorched earth policy to subdue people of the region. The government has accused “armed groups” of burning crops. 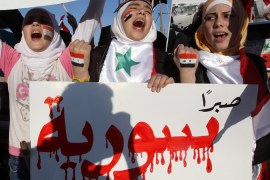 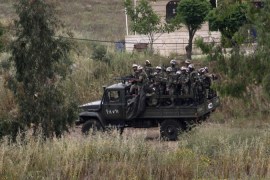 Tanks surround Maarat al-Numan ahead of military offensive, prompting an exodus of residents from the northern town. 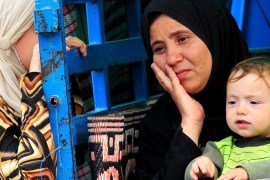 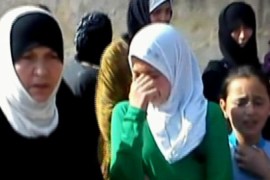