NATO has once again pounded the area near Libyan leader Muammar Gaddafi’s compound, rattling windows in the heart of the capital, Tripoli.

A series of loud blasts rocked the city early on Thursday morning and smoke could be seen rising above the fortified compound of the embattled Libyan leader.

It was not clear what was hit, and there was no word on casualties, as government officials did not immediately comment on the strike.

NATO warplanes have repeatedly targeted the area in and around the Bab al-Aziziya compound, Gaddafi’s command centre.

The North Atlantic alliance launched its air campaign nearly three months ago under a UN resolution to protect civilians.

It has been pounding Gaddafi’s military and government positions with increasing vigour but has failed to dislodge him.

Amid the bombings, Mikhail Margelov, the Russian envoy, reached Tripoli and has met senior Gaddafi officials.

The ITAR-Tass, the Russian news agency, said Margelov met with Abdul-Ati al-Obeidi, the Libyan foreign minister and is expected to call on Al-Baghdadi Al-Mahmoudi, the prime minister.

Meanwhile, Gaddafi’s government approved a $31.4bn budget for the rest of 2011, the country’s official news agency said on Thursday, in an apparent move to show it was functioning despite air strikes and sanctions.

The Libyan leader has described the rebels as criminals and al-Qaeda fighters, and called the NATO intervention an act of colonial aggression aimed at grabbing Libya’s oil.

Ties are becoming strained in the alliance, with some NATO members complaining that others have been reluctant to commit additional resources.

Last week, Robert Gates, the US defence secretary, criticised European allies for failing to do enough to back the mission after the alliance took over operations in late March.

Barack Obama, the US president, is also facing criticism from Congress on the continued involvement of US in Libya.

The House of Representatives passed a resolution on Tuesday refusing  against the US’ involvement in the Libya conflict.

On Wednesday, ten politicians sued Obama, saying he had taken military action without the approval of Congress.

But the White House insists that Obama has the legal authority to press on with US military involvement in Libya and urged sceptical legislators not to send “mixed messages” about their commitment to the NATO-led air war.

The cost of US military operations and humanitarian assistance in Libya was $716m as of June 3 and was projected to reach $1.1bn by September 30, according to a White House a report to Congress released on Wednesday.

Cameron reiterated that time was running out for Gaddafi and that the alliance was as determined as ever.

“I think there is a very clear pattern emerging which is time is on our side, because we have the support of NATO, the United Nations, the Arab League, a huge number of countries in our coalition and in our contact group,” he said.

Dmitry Rogozin, Russia’s envoy to NATO, said the alliance was “sliding down and being dragged more into the eventuality of a land-based operation in Libya”.

What started as a peaceful uprising inside the country against Gaddafi and his more than four-decade rule has become a civil war.

Poorly equipped and trained rebel fighters have taken control of the eastern third of Libya and pockets of the west.

On Wednesday, Libyan rebels wrested two key villages in the western mountains from forces loyal to Gaddafi as they continued to push deeper into government-held territory south of Tripoli.

An Al Jazeera correspondent confirmed on Thursday that rebels have declared their control over all areas of al-Jabal al-Gharbi [the western mountain], including the city Kikla, about 150km south of Tripoli.

The two villages had been used for months by pro-Gaddafi forces to shell rebel-held towns.

“The revolutionaries now control Zawiyat al-Babour and al-Awiniyah after pro-Gaddafi forces retreated this morning from the two villages,” Abdulrahman, a rebel spokesman in the nearby town of Zintan, told the Reuters news agency.

In Gharyan, a Gaddafi-held town that forms the gateway from Tripoli to the mountains, there was an undercurrent of tension as the frontline moves closer to the capital.

Meanwhile, the Libyan state TV said 12 people have been killed in a NATO air strike on Kikla.

A rebel spokesman in Nalut, a town in the western mountains, said there were no casualties from the shelling on Wednesday.

“Gaddafi’s forces bombarded Nalut … Over 20 Grad rockets landed in the town. They bombarded from their positions … around 20km east of Nalut,” he said, adding that they had also shelled the Wazin-Dehiba Tunisia border crossing.

Dozens of Libyan soldiers also have defected to Tunisia by boat, the state news agency there reported on Wednesday. 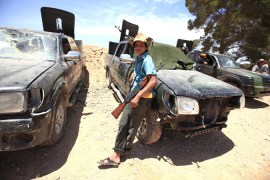 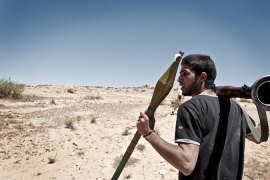 US House votes to block funding for Libya

Bill to prohibit funds for US military operations in Libya unlikely to become law, but seen as snub to president. 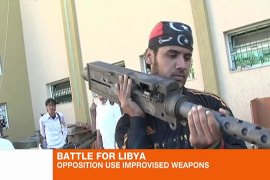 Libya rebels use discards to make own weapons

With a shortage of arms, fighters have been creating weapons from discards and scraps. 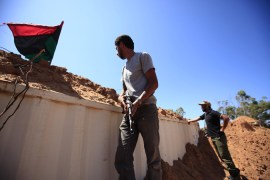 Germany’s endorsement of opposition council tempered by news of at least 25 deaths near the eastern city of Brega.