Stock markets around the world have fallen significantly amid fears over Greece’s escalating debt woes.

Shares were hard hit after thousands of protesters besieged the Greek parliament on Wednesday to protest against the latest wave of austerity cuts which are fundamental to Greece continuing to receive economic aid.

European shares fell on Thursday, with banking stocks under particular pressure, over fears of contagion.

The falls followed losses in Japan, where the market closed down 1.5 per cent.

Eurozone finance ministers meeting in Brussels on Tuesday failed to agree on how to involve private investors in the latest rescue package for Greece, with a solution seen about a month away. Fresh talks have been called for Sunday.

Greece has warned it will be unable to pay next month’s bills without a $17bn loan instalment from the EU and the IMF, part of a broader $159bn bailout package agreed last year

The latest protests, coupled with uncertainty over a second bailout for Athens and fears of contagion pushed the bond yields of Greece, Ireland and Portugal to euro lifetime highs.

The BBC reported that a leaked account of a meeting between EU commissioners on Wednesday suggested that the commissioners have a “profound sense of foreboding” about Greece and the future of the eurozone.

The account, written by an official who attended the meeting, said this was in reaction to the “damning failure” of eurozone ministers to agree a new bailout for Greece on Wednesday.

The author cautioned that the markets would now “smell blood”.

Creditors have warned there will be no more financial aid without firm reform commitments from Athens.

George Papandreou, the Greek prime minister, said in a televised address on Wednesday that he would form a new government on Thursday and seek a vote of confidence from his PASOK parliamentary group.

“I will continue on the same course. This is the road of duty, together with PASOK’s parliamentary group, its
members, and the Greek people,” Papandreou said.

“Tomorrow I will form a new government, and then I will ask for a vote of confidence.”

But opposition conservatives insisted a unity government was only possible if the bailout was renegotiated.

With its credit rating deep in junk status, Greece is being kept afloat by the $159bn EU-IMF rescue loan programme and will need additional support to cover financing gaps next year.

To meet its commitments, Papandreou’s Socialists abandoned a pledge not to impose new taxes and drew up a four-year privatisation programme worth $72bn.

This has fuelled ongoing protests against austerity by public utility employees and other affected groups.

This is a surprising low for Greece as the country still had a stellar A-rating despite a hefty debt burden in January 2009. 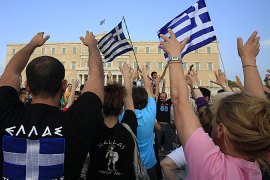 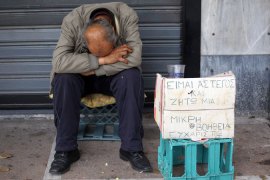 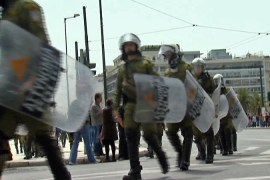 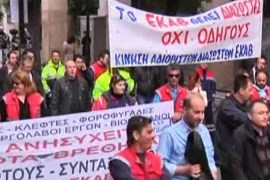