The US House of Representatives has voted to prohibit the use of funds for US military operations in Libya.

Politicians adopted the amendment to a military appropriations bill by a vote of 248 to 163 late on Monday.

A number of members of Congress have expressed their dissatisfaction at Barack Obama’s, the US president,  decision to go ahead with operations in Libya in March and to continue without congressional authorisation.

According to US law, the president must seek congressional authorisation to send US troops into combat and must withdraw the forces within 60 days if Congress has not authorised the military action.

The amendment, introduced by Democratic representative Brad Sherman from California, invokes the War Powers Resolution, a 1973 law that limits presidential powers on sending troops abroad into combat zones without the consent of Congress.

Sherman’s text states that “none of the funds made available by this act may be used in contravention of the War Powers Act.”

Politicians must still approve the appropriations bill as a whole and the measure must still be approved by the Senate.

Al Jazeera Patty Culhane, reporting from New Hampshire, said: “This is going to be a bit of a shock for Obama administration as the vote was so overwhelmingly against allowing him to use the fund in Libya.

The White House has been under rising pressure from congressional critics demanding details about US goals in Libya.

“President Obama might face an uphill battle because even his own party has been very concerned about his action in Libya,” said Culhane.

“Lot of people, both in his party and Republican side, think that he has over-stepped his bound.

“[The] House of Representative’s message to Obama: You can’t use any money until you get our permission to continue in Libya.”

“It doesn’t mean US planes are necessarily going to stop flying, but it does mean that the president has to get back to Washington and try to convince the Senate not to go along with House of Representative,” she said.

Meanwhile, fighting has been going on between forces loyal to Muammar Gaddafi, the Libyan leader, and opposition forces on several fronts in Libya.

Gaddafi forces have pulled out of the town of Kikla, about 150km southwest of Tripoli, and rebels are now in control, a Reuters photographer there said on Tuesday.

The photographer, Youssef Boudlal, said pro-Gaddafi forces had retreated to positions about 9km from the town. The rebels were setting up defensive positions in case of a counter-attack, he said.

This comes on a day, Libyan troops fired several grad rockets from positions controlled by Gaddafi over the border into Tunisia, witnesses said.

No damage was done, but it could escalate tensions between the neighbours.

“At least five rockets fell on Tunisian soil today in the Mrabeh. It was a heavy bombardment from Gaddafi’s side of the mountains,” Mohammed Nagez, a local trader, said.

Meanwhile, NATO has continued with airstrike in Tripoli to put pressure on Gaddafi. On Tuesday, it targeted the area near Libyan leader’s compound in the capital.

A column of gray smoke could be seen rising from the area around Gaddafi’s Bab al-Aziziya compound before dawn on Tuesday.

The latest bombing comes hours after a number of foreign anti-war activists appeared onstage at the compound.

Shelling by Gaddafi forces has hit an oil refinery in the western rebel-held city of Misurata and the refinery’s power generators have been reportedly burnt down but there was no damage to the oil storage facilities.

Rebel fighters said they were making gains towards Zlitan from Misurata. Zlitan is one of three towns separating Misurata from the capital Tripoli.

Battles were also being fought in the Berber mountains southwest of Tripoli, in nearby Yafran, and at Dafnia near Misurata, rebel sources said.

Government forces posted a few miles east of Zintan, which remains under rebel control, fired Grad and Katyusha rockets at the town.

On Monday, Gaddafi troops killed at least 25 anti-government fighters on the frontline between Ajdabiya and Brega in eastern Libya, according to rebel sources.

The rebels have spent months trying to seize the strategic oil hub of Brega, which would open the road to Sirte, the Libyan leader’s home town, and from there to the capital.

Dozens more fighters were wounded and transferred to a hospital in Ajdabiya, 160km south of Benghazi, the de facto capital of the rebels who have been fighting to overthrow Gaddafi since mid-February.

Brega boasts an important oil refinery which, once operational, could supply the east of the country with much-needed fuel to produce electricity.

Meanwhile, admiral Mark Stanhope, the head of Britain’s royal navy, has said the navy could face logistical problems if NATO’s mission goes on longer than another six months.

Elements of the campaign would have been cheaper and “much more reactive” if Britain had still had an aircraft carrier, he said. 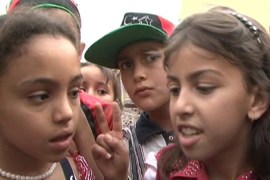 Children most at risk as they witness deaths and live in fear of violence. 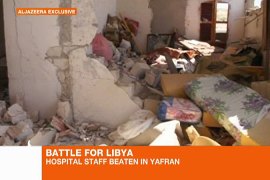 Staff in Yafran narrate the horror they had to go through at hands of Gaddafi forces. 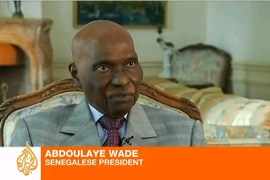 Wade tells Al Jazeera that he is not optimistic about the outcome of the conflict in Libya. 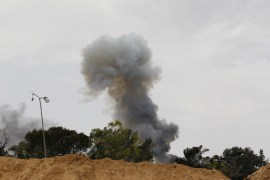 Battle in Zawiyah cuts off vital road to Tunisia and shelling continues in Misurata.