An activist from Jisr al-Shughur has given Al Jazeera the first eyewitness account of the clashes in the northern Syrian town.

He said they started when some of the military secret police refused to fire on protesters on June 3.

The activist, a source trusted by experienced local reporters, spoke from Turkey having crossed the border on Friday night.

“It started a week ago last Friday. There was a demonstration by around 25,000 people calling for toppling the regime,” he said.

“Later that afternoon a man called Baseel el-Masri was travelling through al-Husseiniya village when he was shot and killed by the regime thugs.

“After his funeral the next day, around 11.30 in the morning, there was another demonstration calling for toppling the regime and calling the name of the martyr. As the demonstration passed around the headquarters of the military secret police they opened live fire right away and killed eight people.

“But some of the secret police refused to open fire on the people and there were clashes between them and the other guys doing the firing. It was complete chaos and people fled the scene. Later on, from a distance, we heard bombing in the neighbourhood of the clashes.

“The next day, [Sunday] we saw that all the secret police had withdrawn from Jisr al-Shughur so I and some of the protesters headed to the neighbourhood to see what had happened.

“We saw the headquarters of the military secret police partly destroyed and when we entered the building we saw lots of dead bodies.

“We searched through their IDs to see who they were and if any were prisoners, like activists whose death we would then report to their families. We found among the bodies the head of the military secret police in Jisr al-Shughur. We also found around 30 of the dead who had no IDs and had very long beards.

“Some of them were in plain clothes, some in uniform. This was really surprising as we know people in the regular army and secret police are not allowed beards.

“Then we heard on Syrian TV the news that 120 security personnel had been killed by ‘armed gangs’ in Jisr al-Shughur, and you know the rest of what followed.” 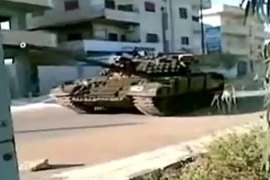 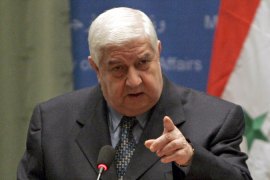 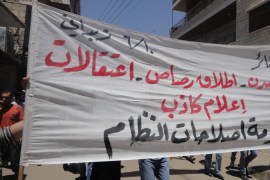 ‘Many killed’ amid fresh Syria protests

Activists say at least 23 people have been killed, most of them after the army shelled town in northern Idlib province. 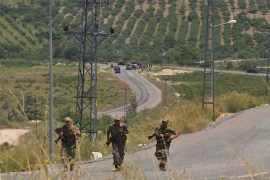 Troops deployed in Jisr al-Shughur, as deaths are reported in protests elsewhere in the country after Friday prayers.