Libyan rebels fought their way back into Zawiyah, a major oil port just 50km west of Tripoli, forcing troops loyal to Muammar Gaddafi to shut down the vital coastal highway that leads into neighbouring Tunisia.

Guma el-Gamaty, a London-based spokesman for the opposition political leadership council, told the Associated Press news agency on Saturday that rebel fighters have taken control of a large area in Zawiyah’s west.

Witnesses and rebel fighters said gun battles were raging inside the port city.

“The situation is very bad in Zawiyah. There’s been fierce fighting since the morning,” Mohammed, a Zawiyah resident who gave only his first name, told the Reuters news agency.

Anti-Gaddafi forces gained control of the city in March but lost it two weeks later in an assualt by an elite brigade commanded by Gaddafi’s son Khamis.

Since then rebels were left with tenuous footholds in Libya’s far west near its border with Tunisia.

Foreign journalists travelling through Zawiyah on a coastal highway leading from west Tripoli to the Tunisian border, reported that they were diverted via backstreets with a police escort as parts of it were sealed off by Libyan soldiers.

The highway was clogged with soldiers and loyalist gunmen carrying assault rifles, some patrolling the road, others manning checkpoints.

The coastal road is a key artery from neighbouring Tunisia for delivery for food, fuel and medicine for the Gaddafi regime.

Friday was a day of heavy fighting around the country, with most of the violence spilling over into the next day.

Shelling continued sporadically on Saturday near the rebel-held city of Misurata in Libya’s west, where clashes from the previous day had killed 31 people, according to a doctor at Hikma Hospital.

Al Jazeera’s Tony Birtley, reporting from Al Dafniya, 30km from Misurata, said it had been “a bloody day in terms of casualties”.

“For nine intensive hours bombardments were non-stop. We were at a former garage workshop that has been turned into a mash unit, and body after body after casualty was being brought in there. It was complete mayhem.

“They can do the absolute basic surgery there to help them out and hopefully they can keep them alive long enough to bring them to Misurata for more intensive treatment.”

Gaddafi forces also shelled the world heritage-listed Berber city of Gadamis for the first time, about 600km southwest of the capital on the Tunisia and Algerian border, opening a new front in the five-month long civil war.

Ahmed Bani, a military spokesman in Benghazi, told the Reuters news agency that clashes had broken out in Zlitan on Thursday and resumed on Friday with Gaddafi forces killing 22 rebels.

Zlitan is one of three towns that are under government control between Misurata and the capital and if it were to fall, could act as a stepping stone to allow the anti-Gaddafi uprising to spread from Misurata, the biggest rebel outpost in western Libya, to Gaddafi’s stronghold in Tripoli.

“Large numbers of troops are surrounding Zlitan from all directions and are threatening its residents with having their women raped by mercenaries if they do not surrender,” Bani said, adding the rebels controlled parts of the city.

Air strikes on Friday evening sent plumes of smoke over Tripoli, and the direction of the strikes suggested that either Gaddafi’s compound or nearby military barracks were shelled.

After the strikes, pro-Gaddafi supporters fired assault rifles into the air and beeped their car horns in defiance.

The strikes followed a total of 14 air attacks carried out on Thursday, considerably fewer than the heavy bombardment on Tuesday that flattened major buildings in Gaddafi’s compound in the centre of the city.

Libyan state TV reported that NATO warplanes also attacked targets in the Ain Zara neighbourhood in the southeast of Tripoli.

‘No way out but to leave’

Under pressure to come up with plans for a transitional government while still in disarray, the rebels have said the onus is on foreign powers to hasten assistance.

“Our people are dying,” Ali Tarhouni, the rebel oil and finance minister, said. “So my message to our friends is that I hope they walk the walk.”

NATO member-state Turkey said that Gaddafi has no way out but to leave Libya, and offered him an exit.

Turkey’s Prime Minister Tayyip Erdogan said, “We said we will help you leave for where ever you would like.”

“Gaddafi has no way out but to leave Libya, through the guarantees given to him, it seems.”

Erdogan added, “We ourselves have offered him this guarantee, via the representatives we’ve sent. We told him we would help him to be sent wherever he wanted to be sent. We would discuss the issue with our allies, according to the response we receive.”

However, he added that Turkey had received no response from Gaddafi regarding the deal.

“I have contacted him six or seven times. I sent our special representatives, but we always faced stalling tactics. They tell us they want a ceasefire, we tell them to take a step, but the next day you find out that some places were bombed.”

US Secretary of State Hillary Clinton, speaking from the Abu Dhabi meeting of the Libya contact group on Thursday, said that talks were under way with people close to Gaddafi, telling reporters that “Unfortunately we still haven’t got a response from Gaddafi.”

Clinton added, “There is not any clear way forward yet”.

Mikhail Margelov, Russia’s Africa envoy, who travelled to Benghazi on Friday, said he would go to Tripoli as soon as NATO provided a corridor through its Libyan no-fly zone. 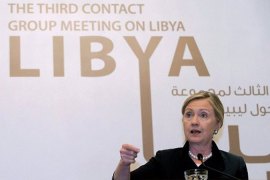 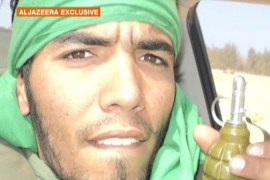 New video gives insight into reality of war from perspective of government troops. 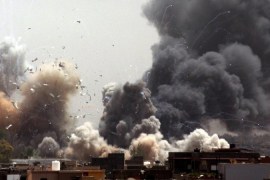 Opposition forces continue to advance, with the front line less than 100km from the capital. 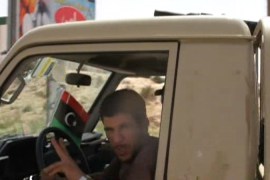 Opposition fighters say they are making gains in Libya, with very limited weaponry and no outside help.