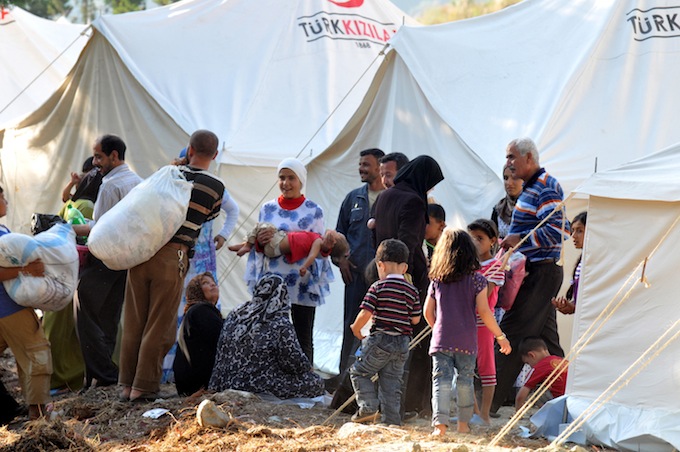 About 2,400 Syrians have fled to Turkey to escape the unrest at home [EPA]

Syrian state television says the country’s army has begun operations in Jisr al-Shughur, a restive northern town near the Turkish border, as anti-government protests are held in cities across the country.

The government said the operation on Friday aimed to restore security in the town, where authorities said 120 security personnel were killed by “armed groups” last week.

The reporter accompanying the army said troops backed by tanks were on the outer edges of the town, ready to enter.

A resident of Jisr al-Shughur who fled the town on Friday morning, making his way towards the Turkish border to seek refuge, denied the government’s claims that there were armed gangs in the town.

“All the accusations of residents sheltering gangs are false,” he told Al Jazeeera. “And we never asked the army for help or to enter our city. It is them firing on us.”

The resident said he had seen the army shooting at fleeing villagers with machine guns.

“They have burned down all the crops in surrounding fields and the villagers are fleeing to the nearby mountain.”

Protests erupted in many cities across Syria after Friday prayers.

Security forces shot dead at least two protesters when they fired at a rally in the Qaboun district of Damascus, the London-based Syrian Observatory for Human Rights said.

“It seems that it was a big demonstration, given the direct use of live ammunition,” the group’s director Rami Abdelrahaman said, adding that the information came from witnesses.

Other activists said security forces fired automatic rifles, some from rooftops, at the demonstration, which demanded the removal of President Bashar al-Assad.

“There was a demonstration of 1,000 people when the ‘Amen’ [security police] fired from their cars,” one of the residents of Busra al-Harir village said, giving the names of the dead protesters as Adnan al-Hariri and Abdelmuttaleb al-Hariri.

Syrian state television said a member of the security forces, whom the television described as “preservers of peace”, was shot dead by gunmen in Busra al-Harir, but residents say no policemen were killed and that the demonstration was peaceful.

A fifth protester was shot dead in the Mediterranean port city of Latakia, the Syrian Observatory for Human Rights said.

In the north of the country, more than 8,000 protesters marched through three Kurdish towns to demand political reform and in solidarity with Jisr al-Shughur, activist Hassan Berro said.

“With our blood and our soul, we sacrifice ourselves for Jisr al-Shughur,” the demonstrators chanted in Ras al-Ain on the border with Turkey. Protests were also taking place in Qamishli and Amuda.

Reporting from Yayladagi in Turkey, Al Jazeera’s Anita McNaught said the military operation in Jisr al-Shughur had been building for some time.

“They [state TV] are saying that armed gangs are burning the fields around Jisr al-Shugur. Whoever is doing it, that will provide a smokescreen for whatever is going to happen inside, but there is no question that the crackdown that the Syrian government is planning is going to be immense.

“Some of the villages have nearly emptied of population, people are bracing themselves for some sort of conflict. People have erected barricades where they can. The Syrian military, of course, is very well equipped, very well armed, so some kind of showdown is imminent in this area,” she said.

Reports in the last days of an imminent military operation in the town have prompted an exodus of refugees to nearby Turkey.

More than 2,400 Syrians have fled into the neighbouring country to escape the unrest in Jisr al-Shughur and other towns, according to the UN and Turkish officials.

Refugees started entering Turkey on April 29, according to the UN High Commissioner for Refugees (UNHCR).

But the flow of refugees has increased sharply this week. More than 1,000 people crossed the border in the last 24 hours, the UNHCR said on Thursday.

Most refugees are being housed at a camp in Yayladagi, a town about 10km from the border and 25km from Jisr al-Shughur.

Dozens of white tents have been set up in the camp, and ambulances have been carrying wounded people to hospitals in Antakya, the capital of Turkey’s southern Hatay province.

Metin Corabatir, a spokesman for the UNHCR office in Ankara, the capital, praised the Turkish government’s handling of this newest wave of refugees.

“We have been working closely with the Turkish government, and in general they have been doing a good job providing for the refugees,” Corabatir said.

Recep Tayyip Erdogan, the Turkish prime minister, said on Wednesday that Turkey will not “close its doors” to Syrians fleeing conflict.

‘Split in the army’

Many of the newly-arrived refugees have come from Jisr al-Shughur, after the Syrian government vowed to retaliate over the deaths of 120 members of the security forces.

Activists said the security forces were shot by government troops, after they refused to open fire on civilians.

But Al Jazeera’s McNaught said casualty figures had risen in the area “not only because of battles between protesters and security forces but because of a split within the military itself in Syria where we understand the Mukhabaraat [secret police] wanted to fire at protesters, but certain members of the army were more resistant about doing so, and that may have contributed to the high death toll”.

“There has been absolutely no mutiny at all,” she told Al Jazeera.

Newly-arrived refugees in Turkey could describe the conditions in Jisr al-Shughur, but the Turkish government has largely barred journalists from interacting with them.

Police guard the entrance to the camp, and local officials have been instructed not to talk to the media.

Turkish officials say they are preparing for the possibility of more refugees in the coming days. The camp at Yayladagi can hold up to 5,000 people, and a second camp is “under consideration,” according to local media.

Video shot near the border shows dozens of Syrians camped out in a field on Syria’s side of the border, apparently trying to position themselves for a quick exodus.

Lebanon, Syria’s neighbour to the west, has already absorbed some 5,000 refugees, though the UN says it is a “fluid population” and some of the refugees have already returned home.

The Lebanese government has not released exact statistics on the number of refugees, most of whom receive services from residents of border towns rather than government agencies.