Pakistan has denied allegations of complicity or incompetence in the Osama bin Laden case.

Yousuf Raza Gilani, the country’s prime minister, said it was “disingenuous” for anyone to accuse either the Pakistani state or its various institutions, including its intelligence agencies, of “being in cahoots” with al-Qaeda.

Addressing parliament on Monday, Gilani said it was Pakistan’s spy agency that had given “key leads” that ultimately led to the US raid on the compound in Pakistan’s Abbottabad where bin Laden lived.

He said his country attached high importance to its relations with the United States, but warned that “unilateral actions” ran the risk of serious consequences.

Blaming “all intelligence agencies of the world” for failing to track bin Laden, Gilani said that an inquiry had been ordered, to be led by Pakistani Lieutenant-General Javed Iqbal.

“We will not allow our detractors to succeed in offloading their own shortcomings and errors of omission and commission in a blame game that stigmatises Pakistan,” said Gilani, who termed allegations of complicity or incompetence on the part of Pakistan as “absurd”.

He said the country’s relations with the United States remained “strong”, and that the relationship was based on mutual trust and respect. He said that both sides had agreed a continuing process of dialogue on issues of difference.

“We have a strategic partnership that we believe serves our mutual interests,” he said. The prime minister also said that co-operation on intelligence was essential to serve both countries’ objectives.

Regarding engagement with the world’s major powers, Gilani said that an “ongoing multi-track process” would continue apace, adding that engagement with India would be pursued in a “positive and constructive manner”.

Later on Monday, Jay Carney, the White House spokesman, said the United States wanted to have a “cooperative relationship” with Pakistan.

“We believe it is very important to maintain a cooperative relationship with Pakistan, precisely because it’s in our national security interests to do so,” Carney told a news briefing.

He also said the US would “not apologise for the action that this president took” in ordering the raid on Abbottabad.

The Pakistani premier said that al-Qaeda had “declared war” on Pakistan, and that the killing of bin Laden, its leader, was “justice done”.

He said the Pakistani people and its government were “united in our resolve to eliminate terrorism”, and asserted that there were no divides in the government between the military and intelligence services and the elected government.

He also said that Pakistan was determined not to allow its soil to be used for terrorism.

“Pakistan is not the birthplace of al-Qaeda … we did not invite Osama bin Laden to Pakistan,” he said, while saying that the blame for the creation of radical militant groups after the Afghan War against the Soviets must be shared amongst everyone involved. He placed particular emphasis on the US role in encouraging jihad “in the name of Islam and as a national duty”.

Gilani said Pakistan lost some 30,000 men, women and children, and more than 5,000 armed forces personnel in the fight against terrorism, adding that the fight was a “national priority”.

“We are not naive to declare ‘Mission accomplished’. The myth of Osama bin Laden must be demolished… the anger of ordinary people against injustice, tyranny and oppression must be addressed… otherwise this rage will find new ways to be expressed,” he said.

Gilani said he “emphatically den[ied] the existence of .. a divide” in Pakistan’s state institutions, and also rejected criticism of the armed forces’ reaction to the US raid, saying that the armed forces “reacted as was expected of them”.

He also warned against any attacks on Pakistan’s “strategic assets” – a term often used by the government when referring to its nuclear weapons – by saying that the Pakistani military would respond to such an incursion “with full force”.

No other country or security agencies had done as much as Pakistan’s armed forces and ISI to kill or capture al-Qaeda fighters and leaders, Gilani said, adding that Pakistan had “cautioned international forces on” the implications of a “flawed military campaign” in Afghanistan.

Regarding the allegations against the ISI of either having actively harboured bin Laden, or been incompetent in tracking his whereabouts, the prime minister said such “speculative narratives in the public domain are meant to create despondency”.

Gilani said the military and intelligence agencies would give a joint session of parliament an in-camera briefing on the situation on May 13.

The prime minister also made a reference to Pakistan’s “all-weather friend China”, saying that its leadership as a regional power in technological and other advances was laudable.

Delivered in English, the speech appeared to be directly aimed at the criticisms of the Pakistani government in the wake of the killing of the al-Qaeda leader.

On Sunday, US President Barack Obama appeared on the US television show ’60 Minutes’, saying that it appeared clear to the United States that “some sort of support network for bin Laden [existed] inside of Pakistan”.

Al Jazeera’s Kimberly Halkett in Washington DC reported that there have been some “sharp criticisms” of Pakistan emerging from the US capital in recent days.

Mosharraf Zaidi, an Islamabad-based analyst, told Al Jazeera that he did not believe that Gilani’s speech would go down well with the Pakistani domestic audience.

“I don’t think that at any way, shape or form, the prime minister did anything to assuage Pakistani citizens, Pakistani voters, Pakistanis who are worried about their own security and about the functionality of this country,” he said.

“This was a very poor speech – it was basically a cut-and-paste job from the sort of meandering and bungling statements that have come out of foreign ministry, … the military and … the ministry for information.

Wajid Shamsul Hassan, Pakistan’s High Commissioner to the United Kingdom, however, told Al Jazeera that the speech was “very comprehensive”, and lauded Gilani for placing the conflict in Afghanistan and the formation of al-Qaeda within the historic context of US support for Taliban fighters in the 1980s.

Regardless of the denial, some Pakistani analysts suspect that members of Pakistan’s intelligence services did know that bin Laden was hiding out in the country.

“Somebody in a position of authority had to know,” said Ayesha Siddiqa, a security analyst and author of “Military Inc”, a book on Pakistan’s military.

Talat Masood, a retired general and defence analyst, said that if there was any official complicity in keeping bin Laden hidden, it was most likely at a local level.

“I feel definitely there were influential people who were protecting him,” he said. 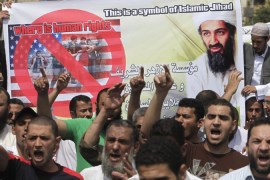 The impact of bin Laden’s death

What does the death of the iconic al-Qaeda leader mean to Barack Obama, the US and the world? 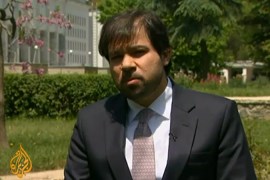 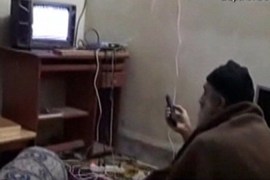 One shows him rehearsing before making a recording and another has him watching news coverage of himself on TV.