Yemeni gunmen alleged to be al-Qaeda fighters have reportedly taken control of the capital of the country’s southern Abyan province.

A resident told Al Jazeera on Sunday that up to 300 fighters entered the southern coastal town of Zinjibar on Friday and took over “everything” in the area.

But the reports could not be independently verified by Al Jazeera due to official restrictions on reporting by foreign media.

In other violence on Sunday, at least four protesters were reportedly shot dead by security forces in the city of Taiz. Local activists said about 3,000 people had gathered outside the police station in Yemen’s second biggest city, demanding the release of a protester.

They said police fired into the crowd when the demonstrators refused to leave.

The developments came amid reports that an informal ceasefire in Yemen between security forces loyal to Ali Abdullah Saleh, the president, and a tribal group had brought a pause in political unrest.

The pro-opposition Hashed tribe has been clashing with forces loyal to Saleh, whose 33-year rule demonstrators have been trying to bring down in protests that have lasted three months.

Al Jazeera’s sources said that despite the truce, explosions were heard in Sanaa, the Yemeni capital, on Saturday.

Fighting this week has left at least 120 people dead and prompted thousands of residents to flee Sanaa.

Hakim al Masmari, the editor of the Yemen Post, told Al Jazeera the fighters moved in after government forces moved out of the area.

He did not say why government troops left.

“This is one of the tricks the president is using to convince the west that al-Qaeda is spreading everywhere in Yemen,” he told Al Jazeera.

“He has declared that al-Qaeda is going to take three provinces,” he said.

“The majority of the Yemenis believe that these are not al-Qaeda; they are just militants, gunmen belonging to the regime and they are under control and he uses them whenever he wants.”

Saleh, who has backed out of a deal brokered by the Gulf Co-operation Council (GCC) to step down peacefully, warned last week that al-Qaeda could take over in many parts of the Arabian Peninsula country if he is forced out of office.

There are worries that impoverished Yemen, where some 40 per cent of the country’s 23 million people live on less than $2 per day, could become a failed state and a major base for al-Qaeda.

The United States and Saudi Arabia, both targets of foiled attacks by the Yemen wing of al-Qaeda, are concerned any spread of anarchy could embolden the rebel group.

Analysts said with the political strife, the Yemen-based al-Qaeda in the Arabian Peninsula (AQAP) is likely to have more freedom to use a proven talent for daring bombing plots.

“Given how distracted Saleh’s government is in its attempts to cling to power, AQAP has much more open space in which to operate at the moment,” Gregory Johnsen, a Yemen scholar, said.

The International Crisis Group, a think-tank, said a broad, lasting ceasefire was needed immediately and should be part of a plan that leads to a transition of power.

“To prevent further escalation and loss of life, the most urgent step is for both sides to immediately accept a ceasefire mediated by Yemen’s statesmen and tribal leaders,” the ICG said in a “conflict risk alert” issued late on Friday.

Foreign states should be involved, it said, “but, given the deeply personal and tribal nature of the feud between the Salehs and al-Ahmars, it cannot be addressed effectively by international mediation or initiatives alone”.

Global powers have little sway in Yemen, where tribal allegiances are the most powerful element in a volatile social fabric and the fighting already appears to be playing out along tribal, quasi-feudal lines.

The political crisis has cost the economy as much as $5bn and immediate aid is needed to prevent a meltdown in the country with a nominal GDP of $31bn, the country’s trade minister told the Reuters news agency.

“The economy should not be held hostage to the political crisis, because the situation is alarming,” Hisham Sharaf Abdalla said.

Saleh has repeatedly imposed new conditions each time a Gulf-led transition agreement was due for signing, most recently demanding a public signing ceremony, according to mediators. 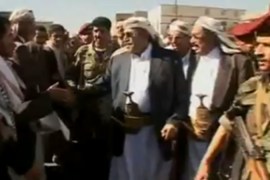 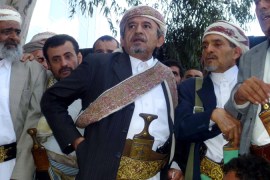 Chief of the Yemeni Hashed tribe has become a key player in the popular uprising against President Ali Abdullah Saleh. 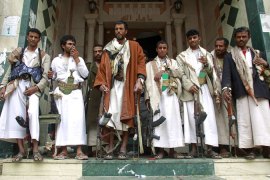