Syria has condemned the imposition of sanctions on its president by the United States as being “part of a regional scheme, aimed primarily at serving Israel’s interests”, state media reports.

The Syrian government said that the sanctions “have not and will not” affect any of its decisions, nor would it affect Syria’s stand on regional and international politics, the SANA news agency reported on Thursday.

Syria has termed the move an attempt to “prolong the crisis in Syria” on the part of the United States.

“The US measures are part of a series of sanctions imposed by successive US administrations against the Syrian people as part of a regional scheme, aimed primarily at serving Israel’s interests,” SANA said.

The White House announced the sanctions on Wednesday, a day before Barack Obama, the US president,  was to deliver a major speech on the uprisings throughout the Arab world.

The sanctions are part of “an effort to increase pressure on the government of Syria to end its violence against its people and begin transitioning to a democratic system”, a US official told the AFP news agency on the condition of anonymity.

In a letter to congressional leaders, Obama said he issued the new sanctions order as a response to the Syrian government’s “continuous escalation of violence against the people of Syria”.

Obama cited “attacks on protesters, arrests and harassment of protesters and political activists, and repression of democratic change, overseen and executed by numerous elements of the Syrian government”.

The sanctions will freeze any assets Assad and the six Syrian government officials have in US jurisdiction and make it illegal for Americans to do business with them.

Syrian rights activists say at least 700 civilians have been killed in two months of clashes between government forces and protesters seeking an end to his 11-year rule.

A day earlier, witnesses said the Syrian army resumed shelling of the western border town of Tal Kalakh for the fourth consecutive day. Syrians fleeing into Lebanon have said that the town has been besieged by security forces and that pro-government armed militias have been killing those deemed to be part of the protest movement.

In comments carried by the private al-Watan newspaper on Thursday, president Assad admitted that the country’s security forces had made mistakes in how they have dealt with the uprising, blaming poorly trained police officers.

He said that thousands of police officers were given new training, and that the “crisis” was near an end. He blamed unrest on foreign agitators and thugs.

In an interview with the AFP news agency on Thursday, Ban Ki-moon, the United Nations secretary-general, said that he has been urging Assad to put reforms into place.

“I have been urging President Assad to engage in dialogue and before it is too late, try to take bold and decisive measures to meet the expectations of people,” he said. “What I have been troubled by in the last several months is that leaders in the region have come out always too late, too little.”

The US announcement of sanctions came as Switzerland also announced new sanctions against Syria on Wednesday, saying that it was following the European Union’s lead in imposing an embargo on arms and equipment used for internal repression.

“The new edict on measures against Syria includes an embargo on military assets and equipment that could be used for internal repression,” the Swiss economic ministry said in a statement.

“It also includes financial sanctions and travel restrictions on 13 people from the Damascus regime,” it added.

The ministry said that through the new sanctions, “Switzerland is joining sanctions announced on May 9, 2011 by the European Union against Syria.”

“Our demands are clear. Violence and repression against peaceful demonstrators must be stopped immediately,” Guido Westerwelle, Germany’s foreign minister, said. 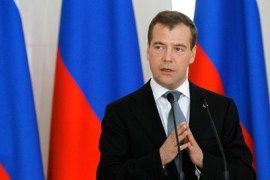 Russia ‘to oppose use of force against Syria’

President Medvedev comes out against any UN move to authorise use of force, saying Syria must settle own affairs. 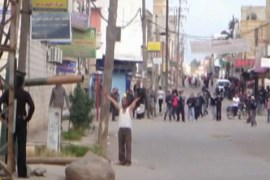 Protests continue despite the military siege in some cities and towns across the country. 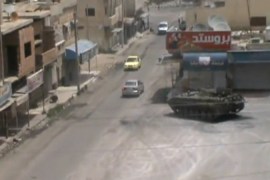 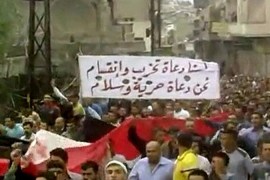 Dozens of students reportedly injured in second-largest city as authorities continue to crack down on protesters.