Egypt’s former first lady Suzanne Mubarak’s condition has improved, after she reportedly suffered health problems following an order for her detention on suspicion of corruption.

Mubarak, was originally reported to have had a heart attack but the Associated Press news agency said that she was now in stable condition after treatment for a “panic attack”.

She has effectively been detained in the hospital pending further investigation of corruption allegations, officials said on Saturday.

Mubarak fainted and suffered chest pains following a three-hour interrogation on Friday which ended with a decision to detain her for 15 days as prosecutors looked at the sources of her wealth.

She has been accused of taking advantage of her husband’s position for personal gain.

Ashraf Hatem, said Mubarak, 70, was in stable condition on Saturday after a 24-hour monitoring period in the intensive care unit.

She is in the custody of the police, Hatem said, according to Egypt’s state news agency MENA.

It was not clear whether she would be transferred to a Cairo women’s prison facility, where she was expected.

Another hospital team was to prepare a full medical report before a decision is made.

A hospital official had said Mubarak was visited Saturday by a cardiologist who found “noticeable improvement in her condition”.

He said that Mubarak on Friday “suffered from a sudden panic attack after hearing that she will be sent to prison”.

The hospital official spoke on condition of anonymity because he was not allowed to release the information before further tests were conducted.

The former president had been questioned several times about allegations that he illegally amassed vast wealth, but his wife was being interrogated for the first time on corruption charges.

The Mubaraks and other members of the former regime have been the subject of legal efforts to bring them to trial since the ex-president was forced to resign February 11 after a popular uprising.

The process has been complicated by slow procedures and, in the Mubaraks’ case, by health issues.

Many in the protest movement have been critical of the current military rulers for being slow in pursuing corrupt officials, one of the movement’s main demands.

Once a low-key first lady known for her focus on women and children rights, Mubarak had in the last decade become a powerful mover in Egyptian politics.

She was a strong backer of her son Gamal’s efforts to succeed his father as well as another son Alaa’s business activities.

The former first lady was also known to have a say in the promotion of senior officials.

One of her most vaunted projects was the rebuilding of the Alexandria Library.

She was asked about allegations she took personal advantage of funds coming to that library and used her charity organisations as a front to amass wealth, Egyptian media have reported.

Last month, the country’s police chief recommended that the former president not be moved from the hospital until his health stabilised after he also collapsed as his investigation began.

In addition to being treated for heart problems, Mubarak underwent gallbladder surgery in Germany last year. 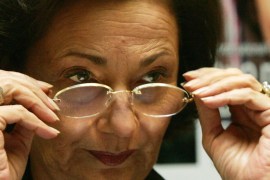 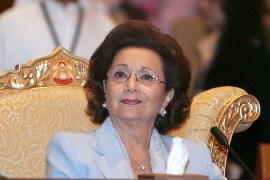 Suzanne Mubarak, wife of the deposed Egyptian president, claims health problems after being detained for investigation. 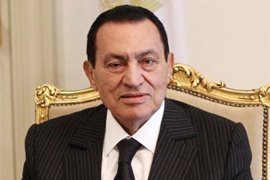 The order of 15-day detention follows Mubarak’s questioning over illegal acquisition of wealth. 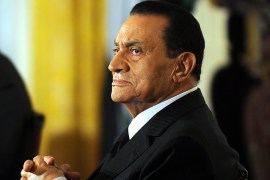 Arab leaders will be watching Hosni Mubarak’s trial closely to see the possible repercussions of autocracy.