The Hamas-run government has announced that Palestinian groups in the Gaza Strip have agreed to cease-fire in an effort to halt spiraling violence with Israel.

The Interior Ministry said in a statement that it had received a positive response to its efforts to stop the violence from escalating.

Hamas security sources said on Friday that after its announcement, Israeli aircraft targeted smuggling tunnels in southern Gaza, an abandoned house east of Gaza City and a group of armed men in that area. No casualties were reported.

On Thursday, as many as five people were killed in renewed violence along the border between the Gaza Strip and Israel. Dozens more have been injured, medical sources said.

A projectile – which Israeli military officials said was an anti-tank missile – was fired from the Gaza Strip toward Nahal Oz, near Sa’ad in the Sdot region of southern Israel, damaging a school bus.

A 16-year-old boy was severely injured and shrapnel from the explosion hit the bus driver in the leg, said Israeli officials. The rear of the bus was badly damaged and the glass was blown out of its windows.

Israel responded with a series of air strikes, the first of which saw an Apache helicopter target Ash Shuja’iyeh, a suburb of east Gaza. A 50-year-old man was killed and at least six people, including a four-year-old girl, were injured, said Palestinian medics.

Ma’an News Agency named the dead man as Mahmoud Al-Manasra, reportedly killed by the shelling while in his home in the densely packed neighbourhood.

A further two people were killed, and several more injured, in a later air strike which targeted an area near Rafah in the south of the Strip, Al Jazeera’s Nicole Johnston reported. Two others also later died, she said.

Israeli defence minister Ehud Barak ordered the military action, as “he sees Hamas as responsible for every attack originating in Gaza”, said a statement from his office.

The al-Qassam Brigades, the armed wing of the Hamas movement, said it had shot two missiles early in the day, one of which had hit the school bus. The Brigades said the attack came in reponse to Israel’s killing of three of its members last week.

A senior Hamas official told Al Jazeera: “The Israelis are trying to impose a new formula in Gaza. They are trying to prevent us from taking any benefits in the region.

“They are trying to escalate the situation … The coming few days will carry a lot of developments if things continue like this.”

Mahmoud Abbas, president of the Palestinian Authority, urged western powers to intervene and called on Palestinians “not to give Israel an excuse to hit Gaza”.

Meanwhile, Israeli prime minister Benjamin Netanyahu told reporters: “We hope this situation will be contained but we will not shy away from taking all the necessary action, offensive and defensive, to protect our country and to protect our citizens.”

After a day of violence on both sides of the border fence, a spokesman for the US administration condemned the attack on the bus “in the strongest possible terms”.

A Hamas checkpoint in Shuja’iyeh was also targeted by Israel, though no injuries have yet been reported there. A police training ground was reported to be billowing smoke east of Gaza City.

Further projectiles, which Israeli military officials said were anti-tank missiles, were then shot from the central Gaza Strip, east of Deir al-Balah, reports our correspondent.

Israel’s “Iron Dome” missile system shot down one of dozens of rockets the military said crossed the border. It is understood to be the first operational use of a short range anti-missile missile.

The Israeli military said it would “continue to operate in the Gaza Strip according to security assessments” as it continued operations during the day.

The fire from Gaza on Thursday began a few hours after Israel’s air force bombed sites which it said were smuggling tunnels in the northern Gaza Strip, said Israeli newspaper Yediot Aharanot. Palestinian sources reported that four people were injured in those stikes.

Bethlehem-based Ma’an News Agency said three of the overnight air strikes hit the southern Gaza Strip – one in the Yebna refugee camp, a second in the Barazili neighbourhood and a third hit tunnels near the Salah Ad-Din district. The fourth hit an area east of Gaza City, said Ma’an. 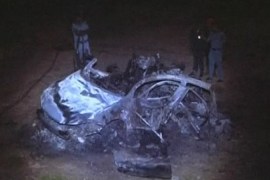 Sudan to report Israel to UN over air strike

Both men killed were Sudanese citizens, say officials – denying reports that one was a Hamas arms smuggler. 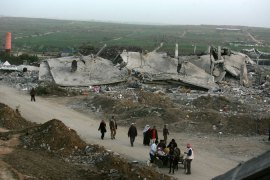 Goldstone recants, but how much is changed?

Richard Goldstone admits there were flaws in parts of his report on war crimes in the Gaza war, but much is still valid. 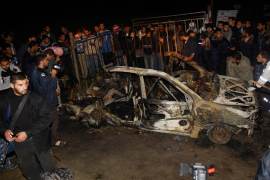 Hamas warns of “consequences” after three of its members killed in Israeli attack on the Gaza Strip. 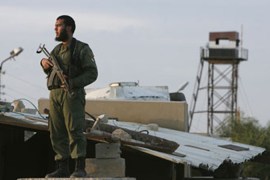 Israel targets members of Islamic Jihad’s armed wing in Gaza, blaming them for firing a rocket into Israel.