Bashar al-Assad, Syria’s president, has appointed a new governor to the southern town of Daraa, the hub of a more than two-weeks-long protest movement.

Assad, who is facing unprecedented domestic pressure as protesters demand greater freedoms in a test to his family’s four-decade grip on power, has made a string of gestures hinting at change.

On Monday, he appointed Mohammad Khaled al-Hannus governor of Daraa, an agricultural town near the border with Jordan, where dozens have been killed in protests.

Hannus replaces the much-reviled Faysal Kalthum, sacked on March 23 at the height of the demonstrations that left dozens dead and the governor’s residence in flames.

The appointment, which was immediately dismissed as not enough by Syrian human rights activists, came one day after Assad asked Adel Safar, the former agriculture minister to form a new government.

“The residents of Daraa want more than a switch in governor – they want the security services to stop oppressing them, the emergency law lifted, property rights respected, the detained freed and freedom of expression guaranteed,” one activist told the AFP news agency on the condition of anonymity.

Residents of Daraa had accused the former governor of postponing the acquisition of property rights and preventing farmers from drilling water wells for irrigation.

Earlier, a lawmaker from the region, issued in parliament a scathing indictment against security forces, accusing them of opening fire “without mercy” and criticising the head of state for not offering his condolences.

Activists estimate more than 130 people have been killed in clashes with security forces, mainly in the cities of Daraa and Latakia. Officials have put  the death toll at closer to 30.

A call for more protests

A Facebook group has called for a “Week of the Martyrs” protest in Syria in honour of those killed in the security clampdown on pro-reform rallies that mobilised thousands on Friday.

“The Week of the Martyrs will be a thorn on the regime’s side,” the organisers of Facebook group Syrian Revolution 2011 said, designating Tuesday as the first day of protests focused on coastal towns “far from the capital”.

The group also called for a boycott of cell phone companies on Wednesday, a rally against the ruling Baath party on Thursday outside its Damascus headquarters, and countrywide demonstrations on Friday.

The fire broke out on Monday in Latakia, and SANA quoted Latakia police chief Kamal Fleih as saying prisoners were mostly murder and drug convicts.

He said two policemen were wounded while trying to extinguish the fire. 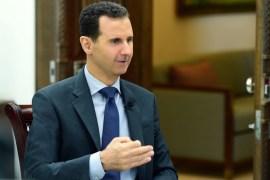 President Assad has ruled Syria with an iron fist for nearly two decades. We take a look at his life and legacy.