Dozens of people have been shot dead by Syrian security forces, activists claim, as tens of thousands took part in anti-government rallies dubbed a “day of rage”.

Activists said at least 50 protesters were killed across the country on Friday, although Al Jazeera cannot independently verify the death toll.

Deraa has been the scene of regular demonstrations since protests against Syrian president Bashar al-Assad’s rule began last month, but the city has also borne the brunt of weeks of government repression.

The government claims its forces are battling “extremist and terrorist groups in the town” and said two soldiers were killed on Friday.

“Deraa has been under siege since Monday morning. Residents from the surrounding villages were trying to break the siege as they tried to get supplies,” our correspondent said.

“They met with hostile security forces who fired at them and we know that at least 15 people were killed.

“One resident told me that people do not have supplies, no communication, the situation is dire and they wonder what the security forces want from the town,” or correspondent said.

Protests against Assad took place in most major centres around Syria on Friday, in a repeat of pro-democracy rallies that have become the norm after weekly Muslim prayers. Activists called on protesters to express solidarity with Deraa, where more than 100 people died a week ago.

Friday brought the largest anti-regime protest in the Syrian capital since the protests began last month. Several thousand protesters demonstrated in the conservative Sunni neighbourhood of Midan, many calling for the toppling of the regime, witnesses told Al Jazeera.

After the protesters had dispersed, a small pro-government demonstration took place with demonstrators carrying sticks and chanting: “With our soul and blood, we sacrifice to you Bashar.”

Witnesses told the AP news agency that security forces had fired on around 2,000 protesters chanting “God, Syria and freedom only” in the central Damascus neighbourhood of Midan.

Large demonstrations were also reported in the central city of Homs, the coastal cities of Baniyas and Latakia, the northern cities of Raqqa and Hama, and the northeastern town of Qamishli.

The AFP news agency reported that 10,000 turned out in Banias, shouting “liberty, solidarity with Daraa” and “down with the regime.”

In Deir Ez-Zor, northeast of the capital, two demonstrators were beaten with batons and electrical cables after 1,000 people emerged from a mosque and were dispersed by security forces, Nawwaf al-Bashir, a human rights activist, told AFP.

According to the the AFP, some 15,000 people turned out in the majority Kurdish city of Qamishli and the surrounding towns, shouting “national unity” and “with our soul and with our blood we will sacrifice ourselves for Daraa,” activists said.

Meanwhile, an eyewitness in Deraa, speaking to Al Jazeera on Friday from close to the Omari Mosque that has been a focus for the uprising, described a scene of death and devastation.

He confirmed earlier testimony from a separate source of a split in the military forces sent by Assad to lay siege to the city.

The witness said he had collected the names of the dead from different neighbourhoods and counted 25 bodies in his own area.

“Some areas smell really bad due to the bodies rotting in the street. No one can collect them for fear of being shot,” he said, the sound of continuous gunfire audible over the phone. Those bodies which have been collected are being stored in refrigerated lorries, he said.

“Deraa is completely surrounded by tanks and armed troops. There are snipers on the roofs of government buildings and tall buildings. They are hiding behind water tanks and some are even hiding in the minarets of mosques.”

The Reuters news agency reported on Friday that a human rights campaigner revealed that makeshift morgues in Deraa contain at least 83 corpses, including women and children.

We counted 83 bodies so far, many stored in refrigerator trucks. Most of the bullets went through heads and chests, indicating that snipers most likely had done the shooting,”Tamer al-Jahamani, a prominent lawyer in Deraa, told Reuters.

Significantly, Friday’s demonstrations have the backing of the outlawed Islamist group, the Muslim Brotherhood, which was crushed by the regime in 1982.

It is the first time that the Brotherhood has called directly for protests in Syria since pro-democracy demonstrations against Assad erupted nearly six weeks ago.

A declaration by the Brotherhood, sent to Reuters news agency by its leadership in exile on Thursday, said: “Do not let the regime besiege your compatriots. Chant with one voice for freedom and dignity. Do not allow the tyrant to enslave you. God is great.”

The protests have drawn a cross section of Syrian society, which has been under Baath Party rule for the last 48 years. The younger Assad kept intact the autocratic political system he inherited in 2000 from his father, Hafez al-Assad. 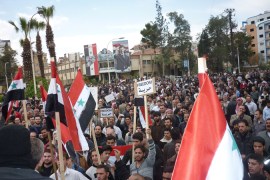 Reports say army units exchanged fire after one refused to shoot at protesters in restive city of Deraa. 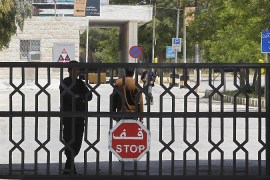 Town of Ramtha, which lies on Syrian-Jordanian border, cut off from family and trading partners in Deraa. 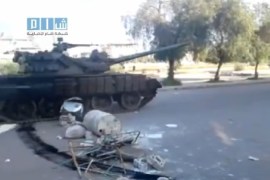 Arrests and raids reported in several towns and more than 200 members of the ruling Baath Party resign in protest.