Pro-Gaddafi forces have clashed with Libyan rebels, Libyan refugees and Tunisian civilians in the Tunisian border town of Dehiba, prompting Tunis to issue a diplomatic rebuke.

Tunisian troops detained and disarmed pro-Gaddafi fighters and then returned them to the Libyan side of the border, Al Jazeera’s Anita McNaught reported from the Tunisian frontier on Friday.

Our correspondent said three pro-Gaddafi soldiers were reported killed, along with one Libyan rebel. Twelve Libyan soldiers were also reported to have been hospitalised in Tunisia.

After shelling the town, pro-Gaddafi forces sent 15 military trucks towards Dehiba on Friday morning, where the majority of the townspeople sympathise with the Libyan rebels, our correspondent said.

“They were extremely angry at the [Libyan] soldiers’ presence, they attacked them with rocks,” she said. “It got very nasty, it’s put the Tunisian government in a very difficult position.”

“We summoned the Libyan envoy and gave him a strong protest because we won’t tolerate any repetition of such violations. Tunisian soil is a red line and no one is allowed to breach it,” he said.

The town had been hit by rocket and artillery fire during the fighting over the nearby crossing on Thursday.

The fighting spilled into Tunisia on Friday after an attack the previous day by Gaddafi loyalists on the strategically important Dehiba-Wazin Crossing, which rebels had taken a week earlier.

Pro-Gaddafi forces retook the crossing after their initial attack on Thursday, but the fighting continued into the night with control of the crossing switching back and forth. The rebels were in control again by Friday afternoon.

The border reopened on Friday evening and the situation was much calmer on the Tunisian side since rebels regained firm control of the area, our correspondent said.

But the incident raises questions about the Tunisian authorities’ failure to do more to protect its own citizens, McNaught said.

Tunisian military and police abandoned the Dehiba-Wazin border post on Thursday evening, drawing anger from Dehiba residents who called from them to return and protect the town, she said.

Tunisian authorities had so-far taken a “very hands-off” approach toward the Libyan clashes in the civil conflict in its southern neighbour.

“They don’t want to add a neighbor problem to their own internal uncertainty,” McNaught explained. Now, however, “the battle has actually come to them”, she added.

Following the fighting, the Tunisian army and border guards increased their presence along the national borders, and seized arms from rebels who had strayed into Tunisia, TAP said.

The crossing, near the western mountains, has been a main route of escape for Libyan nationals fleeing the conflict since the rebels claimed control.

Previously residents of the western mountains area had been forced to take long and difficult roads around the crossing in order to seek shelter or medical help in Tunisia.

Libya’s eastern borders shared with Egypt have been more difficult to penetrate, with Cairo’s reluctance to accommodate flocking refugees.

Controlling the crossing also gave the rebels better access to aid and supplies to continue their fight against Gaddafi forces in western Libya.

Youssef Bounda, a professor of international affairs at Qatar University, said that the Libyan-Tunisian border was crucial for both the rebels and Gaddafi.

“It is the only exit where they can get support – if not military, at least humanitarian,” he explained.

“The fact that Gaddafi wants to secure the [Wazin crossing] area, means he is in a very difficult situation.”
Indeed, the fighting at the Dehiba-Wazin border crossing has stopped the flow of refugees from Libya’s Western Mountains, seeking refuge in neighbouring Tunisia, according to the UNHCR .

“UNHCR is very concerned that people fleeing Libya could be caught in the cross-fire as government and opposition forces battle for control in the border area,” the UN’s human rights agency said in a statement on Friday.

A steady exodus of Libyans had left the western mountains region prior to the escalation in fighting, with more than 3,100 people crossing the border on Wednesday alone.

In other military skirmishes across the country, at least 12 people were killed in the rebel stronghold of Misurata on Friday when pro-Gaddafi forces shelled their homes amid fighting for control of the city’s airport, a local doctor told Reuters. The casualties included two women.

Libyan rebels have fought for the airport, after pushing back government forces from the embattled city’s sea port as the oil-rich country’s tribes urged Gaddafi to relinquish power.

A senior NATO official said military alliance vessels in the Mediterranean Sea had intercepted small boats in the waters off Misurata.

“Only this morning … an incident took place in which it became apparent some vessels, which we assume were pro-Gaddafi forces, were laying mines near the harbour,” Rob Weighill, NATO’s director of operations in Libya, said.

“This is another clear demonstration of the Gaddafi regime completely ignoring international law and also an effort prevent humanitarian assistance going into Misurata to help the beleaguered population,” the British officer said. 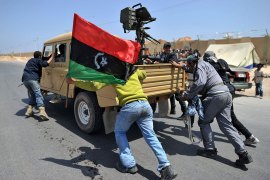 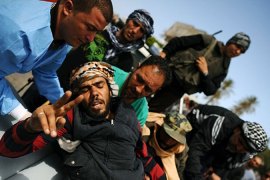 The battle for Misurata

A looming military defeat for Colonel Gaddafi’s troops or a redeployment to new fronts?