The Syrian army has sent more tanks and reinforcements into Deraa as part of a widening crackdown against opponents of the government, and sporadic explosions are being heard in the flashpoint southern city, witnesses say.

Witnesses said a convoy of about 30 tanks were seen on the circular highway outside the Syrian capital, Damascus, on Wednesday.

Troops have been deployed since Monday in Deraa and activists said more gunfire could be heard on Wednesday.

A resident of Deraa, speaking under the condition of anonymity for his own safety, said that security forces had taken over the town hospital, and were shooting at anyone who approached the building.

“Snipers are on top of all the buildings in Deraa and there are lots of bodies on the streets,” the man said in a phone interview. “They were left on the street for three days and we couldn’t remove them.”

Troops had sealed off the town, and were searching homes at night.

Late on Tuesday, SANA, the official Syrian news agency, reported the army “continued to chase armed groups and extremists in Deraa who attacked military positions, cut off roads and forced passers-by to stop so they could hit them”.

SANA also said funerals were to be held for six security personnel killed on Tuesday by “armed extremist groups”.

But Sawasiah, a Syrian human-rights organisation, said security forces had killed 35 civilians since they entered Deraa. The group said electricity, water and telecommunications were cut in the town and that supplies of blood at hospitals were starting to run low.

The Syrian Observatory for Human Rights, another rights group, said it had collected the names of at least 453 civilians killed during almost six weeks of pro-democracy protests.

In a significant development late on Wednesday, 200 members of the ruling Baath Party from Deraa and surrounding regions resigned in protest against the ongoing military assault.

Resigning from the Baath Party, which has ruled Syria since taking power in a 1963 coup, was unthinkable before pro-democracy protests erupted in Deraa on March 18.

“In view of the negative stance taken by the leadership of the Arab Socialist Baath Party towards the events in Syria and in Deraa, and after the death of hundreds and the wounding of thousands at the hands of the various security forces, we submit our collective resignation,” a declaration signed by the Deraa officials said.

A separate declaration sent to the Reuters news agency said a further 28 Baathists in the coastal city of Baniyas resigned on Wednesday in protest against the “practices of the security forces against honourable citizens… and torture and murder they committed”.

In addition to the unrest in Deraa, security forces conducted sweeping arrests and raids elsewhere in the country, residents told news agencies.

Witnesses and human-rights activists said the army deployed tanks around the Damascus suburb of Douma and in Baniyas, the site of large demonstrations recently.

He said he saw several lorries in the streets equipped with heavy machine-guns and members of the plainclothes secret police carrying assault rifles.

He believed the soldiers to be Republican Guards, among the units most loyal to Bashar al-Assad, the Syrian president.

Pro-democracy protesters have tried to march from Douma into the centre of Damascus in the last two weeks but have been dispersed by security forces. 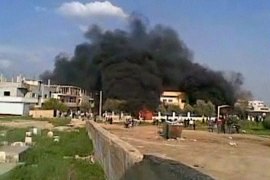 Deraa: A city under a dark siege

Residents of town besieged by the army paint picture of chaos fuelled by secret police. 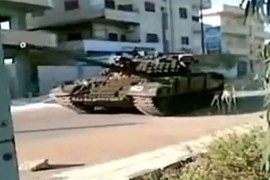 Can the army afford a repeat of the 1982 Hama massacre? 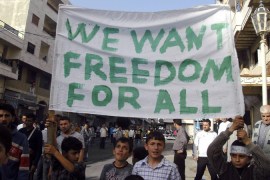 Comprehensive showcase of video capturing the protests that have rocked Syria since March. 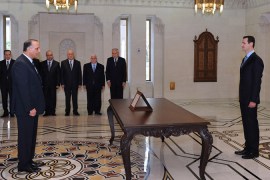