One person has been killed in clashes between Kurdish demonstrators and police in southeast Turkey after prominent Kurdish politicians were barred from running upcoming elections.

Witnesses said the police fired on protesters on Wednesday near the regional capital of Diyarbakir.

A statement from Demirtas Selahattin, a senior Kurdish politician, said that a young man was killed by a “police bullet” and witnesses said security forces fired first plastic bullets and then live rounds against the protesters.

Selahattin, who leads Turkey’s main Kurdish political movement, the Peace and Democracy Party (BDP), had been due to meet Abdullah Gul, Turkey’s president, on Wednesday in an effort to ease tensions over the barred candidates.

But following the violence he cancelled the meeting.

“I have informed (the president) that I cannot go to Ankara in the current circumstances,” he told Anatolia in Diyarbakir.

The governor of Diyarbakir said that police had been responding to an “intensive” hail of petrol bombs, firecrackers and stones from a crowd of about 800 people.

Angry protestors then stormed into the local office of the ruling Justice and Development Party (AKP) and set a fire inside, Anatolia news agency said.

It said that the blaze had caused extensive damage but no casualties.

In Diyarbakir, a bus driver was in critical condition after his vehicle caught fire from a petrol bomb, hospital sources said.

At least 16 protestors were detained and four slightly injured, a reporter with the AFP news agency said.

The violence follows frustration by Kurds over legal hurdles to their candidates’ participation in June 12 parliamentary elections.

Turkey’s Higher Electoral Board (YSK) disqualified seven BDP-backed candidates, but media reports suggest the board could reverse its decision for at least some of the candidates after it asked them to present additional documents.

Among the first four is Leyla Zana, a Kurdish activist and the winner of the European Parliament’s human rights award. She spent 10 years in jail before being released in 2004. 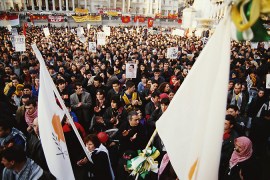 PKK official says group is calling of six-month “period of non-action” put in place ahead of national election. 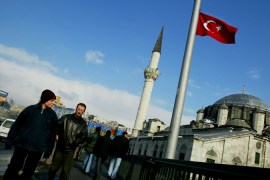 Turkish identity at a crossroads

Can Turkey construct a modern national identity without facing its troubled past?