Gunfire has been reported in the northern suburbs of Abidjan, the commercial capital of Ivory Coast, as Alassane Ouattara, the Ivorian president, continues his attempt to re-establish security after weeks of violence.

The shooting in the northern Yopougon neighbourhood on Wednesday was said to be part of an offensive by Ouattara forces against armed groups loyal to Laurent Gbagbo, the deposed president.

“Since 4am local time we have been hearing heavy firing and loud explosions. We were forced to flee the neighbourhood very early,” the AFP news agency quoted a Yopougon resident as saying.

“An FRCI soldier told us that they had come to dislodge pro-Gbagbo’s Liberian militia who are still hiding in Yopougon,” another resident said, using the acronym for Ouattara’s forces.

Ouattara emerged as the Ivorian leader after Gbagbo, who had refused to step down following the disputed election last year, was arrested on April 11 with the help UN and French forces.

Since then, Ouattara’s government has begun exerting its authority in the strife-torn west African country.

Government forces have set up positions in Abidjan where they stop and inspect vehicles at several intersections and talks are reportedly under way between the government and pro-Gbagbo fighters who wish to lay down their weapons.

Guillaume Soro, the prime minister, held on Tuesday the first ministerial meeting at the official government office where security topped the agenda.

“I think that security has hugely improved since the first difficult days,” he said.

“The interior minister informed us that the police have gone back to their base … and they are ready for work.”

Hospitals in the city remained overwhelmed with the hundreds of people injured in the recent violence. 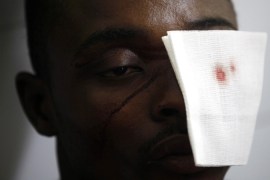 Hospitals are struggling to cope with a huge influx after months of post-election violence. 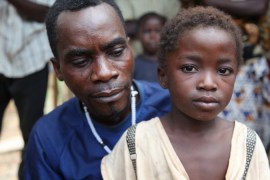 Refugees fleeing the violence in Ivory Coast are braving bandits, hunger and days in the jungle to reach Liberia. 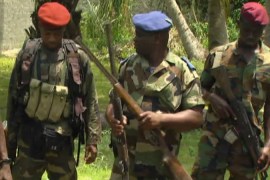 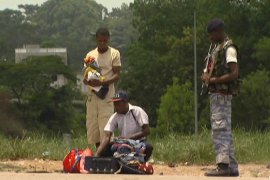 Residents flee Abidjan as situation continues to be volatile, days after the capture of former leader.