At least five civilians have been killed in a day of fierce clashes between pro-government troops and rebel forces in the western city of Misurata.

The fighting in Libya’s third largest city on Wednesday follows weeks of clashes that have left hundreds of people dead and threaten to plunge the city into a humanitarian crisis as food and medical supplies dry up.

“Fierce fighting is taking place now on the Nakl el-Thequeel road which leads to the port. Gaddafi forces have been trying to control this road to isolate the city,” Abdelsalam, a rebel spokesman, said.

“NATO has been inefficient in Misurata. NATO has completely failed to change things on the ground.”

He said “violent fighting” had also erupted on Tripoli Street, a main thoroughfare and another key battleground.

“I’m hearing explosions now. A large number of snipers are positioned there,” Abdelsalam said. “Civilians cannot come out for fear of being shot dead.”

Chris Hondros and Tim Hetherington, both photojournalists, also died in the fighting in Misurata, doctors at a hospital in the besieged city said.

The doctors said earlier on Wednesday that Hetherington had died while Hondros was in critical condition. Getty Images later released a statement saying Hondros had died of his injuries.

Spanish photographer Guillermo Cervera said the group had been trying to leave Tripoli street in Misurata when they came under fire.

Hetherington was an Oscar-nominated filmmaker and photographer from the UK. Hondros, an American, covered major conflicts including Kosovo, Angola, Sierra Leone, Lebanon, Afghanistan, Kashmir, the West Bank, Iraq and Liberia, according to his website.

Eight people were killed in Misurata on Tuesday, mostly civilians, according to pro-democracy forces.

The forces say fighters loyal to Gaddafi have been bombarding the city heavily over the past week. In signs of hardship, there are long queues for petrol and electricity has been cut so residents depend on generators.

Thousands of stranded foreign migrant workers are awaiting rescue in the port area.

The government denies it is attacking civilians in Misurata.

Navi Pillay, the United Nations High Commissioner for Human Rights, said the Libyan government’s reported use of cluster munitions and heavy weapons in Misurata may amount to a war crime under international law.

Abdel Hafiz Ghoga, the Benghazi-based spokesperson of Libyan Transitional National Council, said that they would not object to the presence of foreign ground forces to protect a safe haven for civilians.

“If that [protecting civilians] does not come except through ground forces that will ensure this safe haven, then there is no harm in that at all.”

US aid for rebels

In a related development, US officials announced plans on Wednesday to give the Libyan opposition $25 million in non-lethal assistance in the first direct US aid to the rebels after weeks of assessing their capabilities and intentions.

The US administration has informed congress that Barack Obama, the US president, intends to use his so-called drawdown authority to give the opposition, led by the Transitional National Council in Benghazi, up to $25 million in surplus American goods to help protect civilians in rebel-held areas threatened by government forces.

Hillary Clinton, the secretary of state, said the aid would go to support the council and “our efforts to protect civilians and the civilian populated areas that are under threat of attack from their own government in Libya”.

She said the aid “will be drawn down from items already in government stocks that correspond with the needs that we have heard from the Transitional National Council”.

Earlier on Wednesday, Nicolas Sarkozy, the French president, offered assistance to Abdel Jalil, the leader of the Transitional National Council, when they met in Paris.

“We are going to help you,” Sarkozy told him.

“I think that would be very important for the revolution’s morale,” Jalil said after the meeting.

Sarkozy’s office said it had “taken note” of the invitation.

A French foreign ministry spokesperson said a small number of liaison officers would be sent out to Benghazi along with a special envoy, while Italy said it was ready to send around 10 officers – “the same number of military staff as Britain”.

International forces have been carrying out air strikes on forces loyal to Gaddafi since March 19, in a mission headed by NATO since March 31.

The NATO-led coalition is enforcing a UN mandated no-fly zone in Libya, which authorises “all necessary measures” to protect civilians from attack by Gaddafi’s forces.

It is also policing an arms embargo and has targeted Gaddafi’s military infrastructure.

The rebels have been trying since mid-February to end Gaddafi’s 41-year-old rule but have struggled against his more experienced and better equipped forces. 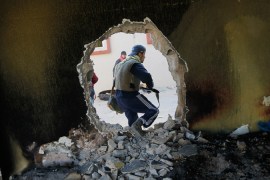 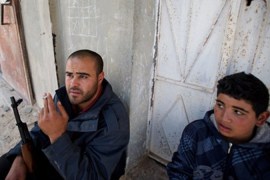 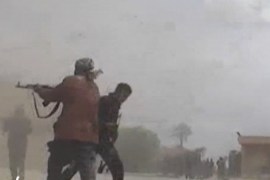 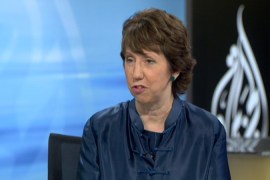