The electoral commission chairman said the election has been postponed to Monday.

“The decision we have taken is weighty indeed but it is an important step in further ensuring the credibility of the 2011 elections,” Attahiru Jega, head of the Independent National Electoral Commission (INEC), said in a televised address.

Officials say the decision was taken due to voting materials failing to reach some polling stations in the country ahead of the vote in which 73 million people are eligible to take part.

Yvonne Ndege, reporting from the capital, Abuja, said there is “huge disappointment” across the country.

“Nigerians were really keen; really looking forward to expressing their democratic will and major questions … are being asked of the electoral authorities, who have spent hundreds of millions of dollars in public money trying to hold this election, which was supposed to take place in January and is already running at least three or four months late,” she said.

Voting had started slowly for the crucial elections, the first in a series of polls set for this month after a campaign marred by violence.

The parliamentary election is to be followed by subsequent polls for a new president on April 9 and state governors on April 16.

“I am anxiously waiting to cast my vote,” said Balami Dalta, a schoolteacher who reached the polling station before election officials in the village of Shaffa in the dusty northern Borno State. “I hope it will influence the outcome.”

But the late arrival of ballot papers there and in some other centres raised early questions over organisation of the vote for the 360-member House of Representatives and 109-member Senate.

In the plush Ikoyi neighbourhood of Lagos, Nigeria’s biggest city and commercial hub, policemen and polling officials sat at wooden benches under mango trees, eating breakfast as they waited for voters to arrive.

The country’s electoral chief had delivered an impassioned plea on the eve of the postponed polls.

“It is incumbent upon all of us to join hands together to conduct elections that are free, fair and credible,” Attahiru Jega said in a statement.

“Our initial reaction is that we suspect there is a deliberate attempt to sabotage the elections and undermine the electoral commission,” said Yinka Odumakin, spokesman for ex-military ruler and presidential candidate Muhammadu Buhari.

“The PDP is afraid to let people come out and vote,” he told the Reuters news agency.

The vote is a test of whether Africa’s most populous country and largest oil producer can break with a history of vote fraud and violence.

Michael Amoah, author of Reconstructing the Nation in Africa, told Al Jazeera that many Nigerians hope these polls will bring positive change to the country.

“A desire for change is strong there, and it is hoped the ballot will speak for itself,” he said.

Election officials had promised police and security agents would be out in force on Saturday, stopping the unaccredited from driving or leaving their neighbourhoods.

Nigeria had tightened security and closed its land borders as the country prepared for the landmark polls.

Authorities announced a reshuffling of state police chiefs a day before Saturday’s polls.

The national police chief announced the redeployment of commissioners, a move questioned by one vice presidential candidate running for an opposition party.

“The posting is to position the commissioners of police for effective performance of their duties during the forthcoming general elections,” police said in a statement.

Goodluck Jonathan, the incumbent president from the country’s south, is widely expected to win the presidential poll and has repeatedly promised free and fair elections.

His main challenger, Muhammadu Buhari, running on the Congress for Progressive Change (CPC) platform, has major support in the country’s mostly Muslim north.

Former anti-corruption chief Nuhu Ribadu, whose Action Congress of Nigeria (ACN) party has a strong following in parts of the southwest, and Ibrahim Shekarau, governor of the northern state of Kano, are also vying for the presidency.

The ruling PDP controls a comfortable majority in the parliament, but some analysts say the poll could significantly loosen its grip on the legislature.

The PDP has won every election since military rule ended in 1999. The previous two elections, held in 2003 and 2007, were marred by fraud and irregularities.

There have been outbursts of violence in the run-up to the polls, including bomb blasts and attacks on political rallies. Amnesty International said at least 20 people had been killed in political attacks and clashes in the past two weeks. 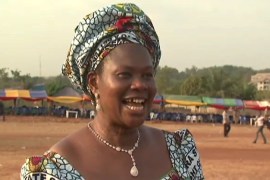 Women vie for votes in Nigeria 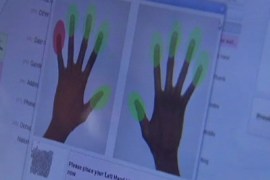 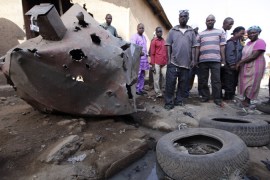 Deadly clashes between Christians and Muslim in Nigeria continue ahead of April elections. 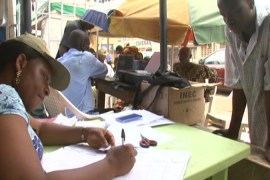