At least four people have been killed in another day of anti-government protests in several Syrian cities, activists have said.

Protest marches against Baath Party rule broke out in cities in the north and south after Friday prayers, including in the flashpoint city of Daraa.

Hundreds of people took to the streets in and around the capital, Damascus, in the afternoon as security forces and ruling party loyalists attacked protesters with batons in Rifaii mosque in the city.

Syrian forces reportedly fired tear gas at protesters in the suburb of Douma, and in the coastal cities of Latakia and Banias.

“Some protesters told us they were there chanting for freedom peacefully,” she said.

Syria’s SANA news agency said a girl was killed in the industrial city of Homs north of Damascus after gunmen opened fire on civilians.

For the first time, the government acknowledged that pro-reform demonstrations were being held, but said there was no friction between security forces and protesters.

The state news agency said worshippers left mosques in Daraa and Latakia “chanting slogans in honour of the martyr and calling for speeding up measures for reform”, adding there were “no clashes between worshippers and security forces in these gatherings”.

The United States on Friday “condemned and deplored” the use of violence against the protesters, and lauded the “courage and dignity” of the Syrian people.

“We condemn and deplore the use of violence against citizens demonstrating in Syria,” a statement from the White House said.

“We urge all parties to maintain calm and avoid violence, and call on the Syrian government to respect human rights and to allow for peaceful demonstrations.”

The rallies, taking place for the third week in succession after Friday prayers, come two days after Bashar al-Assad, the Syrian president, labelled them a foreign conspiracy.

Witnesses in Daraa, a southern town that has been one of the main focal points of rising dissent, said hundreds gathered after leaving a mosque shouting “death rather than humiliation” and “national unity”.

Protest organisers quoted by the AFP news agency said rallies were also being staged for the first time in the mainly Kurdish-populated northeast.

“Several hundred people marched peacefully in the streets of Qamishli and Amuda … chanting ‘we don’t only want citizenship but freedom as well’,” Radif Mustafa, a Kurdish rights activist, told AFP.

Al Jazeera’s Amin said it was significant that protests were taking place despite the president’s speech and the three government announcements on Thursday to address some of the protesters’ demands.

Our correspondent said Syria now was different from three weeks ago.

“There are protesters and protests across the country, and the government appears to be showing more tolerance than it showed two weeks ago. But it is too early to judge how things will turn out by the end of today,” she said.

Activists estimate more than 160 people have been killed by security forces in the protests – dubbed “Friday of Martyrs” after weekly Muslim prayers across Syria – mainly in Daraa.

Officials say about 30 people have died and accuse Muslim extremists and “armed gangs” of pushing peaceful rallies into violence with the aim of inciting sectarian unrest in the country.

In a video message posted online, Haytham Maleh, a Syrian human rights lawyer, called on protesters to keep up their pressure until the government bows to their demands.

“I appeal to Syrians to continue to put pressure on the authorities to fulfil the legitimate demands they have,” he said, warning the government would “assume full responsibility for the consequences” of failing to satisfy the protest movement.

Faced with mounting pressure, Assad on Thursday ordered a string of reforms, including a study of new laws on the media and political pluralism, and plans to tackle the plight of 300,000 Kurds denied citizenship for nearly 50 years.

Assad also ordered an immediate investigation into the Daraa and Latakia killings and the formation of a committee to draft new laws on national security and counter-terrorism.

State-run media said the committee set up by the Baath Party’s regional command would “pave the way for ending the state of emergency” and should complete its work by April 25.

Emergency law was imposed following the Baath Party coup that brought Hafez al-Assad to power in 1970 and has remained in place ever since.

The popular protests were sparked off by the arrest of several teenagers who wrote anti-government graffiti on walls in the southern city of Daraa. The rallies spread to other parts of the country last week. 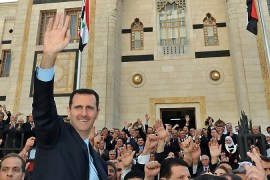 Bashar al-Assad has addressed his nation but did not make any major concessions. We have the latest from Damascus. 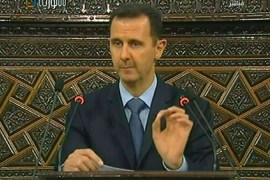