Gunfire erupted overnight in the Syrian city of Homs where thousands of pro-reform protesters had gathered in the main square, a day after activists said at least 25 people were killed there.

An activist on the ground told Al Jazeera that security forces had opened fire on protesters. At least two people were reported injured while tear gas has also been used, according to Al Jazeera’s correspondent in Damascus, Cal Perry.

Homs was shut down by the army with three rings of checkpoints surrounding the city, our correspondent said. Security forces had given protesters until 2.30am to clear the square, but gunfire was reported at 2.15am.

Most of the square was cleared with people scattering across the city, according to our correspondent. But some protesters say they are afraid to go to hospitals.

“They are afraid if they go to the hospitals the security forces will be waiting for them there and they will end up in detention,” our correspondent said.

Baroness Catherine Ashton, the EU’s high representative for foreign affairs and security, said repesentatives of the 27-member bloc were “very worried” about the situation in Syria.

“There has to be an end to violence. The first thing is we’ve got to stop the violence. The government has got to take its reponsibilities seriously,” she told Al Jazeera.

“Lifting the emergency law, something that’s been promised, has to happen. And the reforms – the president has been out there saying: ‘These are the reforms we’re going to do.’ We call on him to actually start to implement them – in all circumstances; dialogue, moving forward, responding to the legitimate wishes of thepeople.”

Asked if the EU would support “regime change” to bring president Bashar al-Assad’s ten-year rule to an end, Ashton said bringing about political reforms may dampen activists’ desires to oust him.

“The important thing is for people to determine their own future. In some countries, what we’ve seen is governments responding to that call, putting in place reforms, moving forward – and the people have gone with that, they’ve seen that as very positive,” she said.

“Government’s responsibility is to respond to its people, to be mindful of what they want and to be clear about their needs.

“When people feel that doesn’t happen, you then hear that frustration coming through. And one of the reasons I’m a passionate advocate of democracy is that democracy not only allows you to elect people, it allows you to say goodbye.”

The latest protests came as Syria’s interior ministry on Monday night said the country was facing an “armed insurrection”.

The government blames armed gangs for the unrest and says several members of the security forces have been killed and wounded in days of violence.

“Some of these groups have called for armed insurrection under the motto of Jihad to set up a Salafist state,” the ministry said in a statement. “What they did is an ugly crime severely punished by law. Their objective is to spread terror across Syria.”

A protester who gave his name as Rami earlier told Al Jazeera that thousands people were staging a sit-in in the centre of Homs and would “continue to protest until the regime is overthrown”.

Suhair Atassi, a prominent rights activist, said 10,000 people were at the square late on Monday night.

Some tents were raised and protesters said they had renamed the Al-Saa (Clock) Square ‘Tahrir Square’, in reference to the focal point of the uprising in Egypt which led to the ousting of former president Hosni Mubarak.

Earlier in the day, thousands attended the funerals for protesters killed in Homs, shouting slogans against Assad, who succeeded his father as president in 2000, continuing an era of Baath Party rule stretching back to a 1963 coup.

Witnesses said mourners chanted “From alleyway to alleyway, from house to house, we want to overthrow you, Bashar,” and “Either freedom or death, the people want to topple this regime”.

Monday’s protests were the largest to hit Syria’s third largest city since protests in the country began one month ago.

“I’m 45 years old. It’s the first time in my life I break the barrier of silence, the first time I feel freedom,” a protester who gave his name as Abu Omar told Al Jazeera.

“The regime does not wish us to enjoy freedom or dignity. For decades we’ve been ruled by an iron fist, by the force of weapon.”

Demonstrations were also reported in the southern city of Daraa, in the Barzeh district of the capital, Damascus, and in Ain al-Arab in the mainly Kurdish north. About 1,500 people gathered at the Shaghour bridge between Aleppo and Latakia in the morning.

A protester in Homs told Al Jazeera that protesters were killed after evening prayers on Sunday when a group of around 40 demonstrators gathered outside the Bab al-Sibaa mosque chanting “freedom”.

The protester, who gave his name as Abu Haider, said seven cars pulled up to the protesters and men in civilian clothes jumped out and opened fire on the crowd without warning.

The nearby town of Talbiseh, where activists said five people were killed on Sunday, was sealed off by government forces on Monday.

Walid al-Muallem, Syria’s foreign minister, met foreign ambassadors earlier in the day and told them that reforms are on their way and that peaceful protest will be tolerated, but not destruction of government properties and other disruptive behaviour.

The latest developments came two days after Assad said Syria’s decades-long emergency laws would be lifted within a week and also promised a number of other reforms.

Despite the apparent concessions, nationwide protests were held on Sunday, which was Syria’s Independence Day, commemorating the departure of the last French soldier 65 years ago. 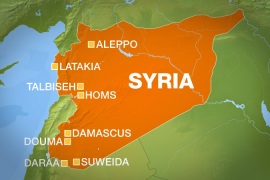 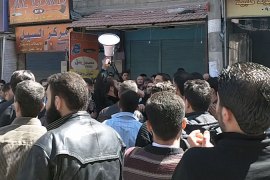 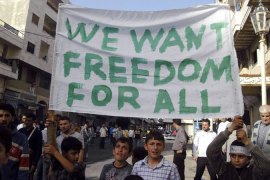 Comprehensive showcase of citizen video capturing the protests that have rocked Syria since March. 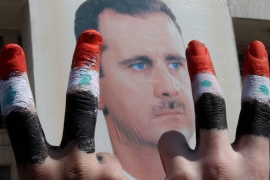