In late March, Amnesty International released a report entitled A lawless law: Detentions under the Jammu and Kashmir Public Safety Act (PSA) that castigated Indian authorities over a law that allows police in the troubled state to detain suspects for up to two years without charge.

The report notes that the PSA “violates India’s human rights legal obligations” by by-passing institutions in securing the long-term detention of political activists, suspected fighters and other individuals in a bid to keep them “out of circulation”.

The PSA is one of two contentious laws in the valley which Amnesty has asked the Indian government to repeal. Azad Essa quizzes SM Sahai, the chief of police in Kashmir, about the report, enforced disappearances and terrorism.

According to the Amnesty International report some 8,000 to 20,000 people have been detained under the PSA over the past 20 years. This is quite a wide estimation?

There is no reason to shroud these numbers in mystery, because we have released figures that say that around 15,600 people were detained. The bulk of these detentions, around 10,000, took place between 1990 and 1996. This was when there was a lot of disturbances in the valley and when a lot of violence was taking place. Of late, in the last two years, the number of cases have come down to a few hundred per year.

Crucially, the report claims that “J&K [Jammu and Kashmir] authorities consistently thwart high court orders for the release of improperly detained individuals”. How do you respond?

As you said, “improperly detained individuals” – sometimes there are certain precautions to be taken, and certain actions that need to be taken when detaining a person under certain conditions. The detention is not sanctioned by the police, but instead is done so by the district magistrate’s office. Yes, sometimes lapses occur, which are procedural in nature. So whenever a procedural lapse takes place, it is normally rectified, and this is not a case of thwarting a high court order. These are mostly technical issues … but the law provides us to rectify it and re-detain the person if need be.

Are you putting this down to technical issues? Amnesty International says that this happens on a large scale and persons are only detained under the PSA because the police do not have enough evidence to charge them in court.

Well, this is whole purpose of the Public Safety Act (PSA). You resort to the PSA when the circumstances are such that it is unlikely that the normal courts will be able to act against the individual because we are facing a terrorist situation. Now you know that in a terrorist situation, it is very likely that the terrorist organisation would intimidate witnesses and subvert evidence … therefore normal procedures do not work.

But this paves the way for abuse and it is also suggested that police often abuse the PSA as a way to intimidate the local population. In your experience is there any truth to this?

You need to understand that the detentions under the PSA happen under a lot of precautions, with checks and balances, and with a lot of accountability. The police only prepare a dossier and the detentions are done by the local district magistrate, who is not a police officer. The government regularly reviews these cases, and the case is scrutinised by an advisory board, made up of judiciary officers that decide on these detention cases.

So you are saying that there is accountability regarding the PSA, it is not done on a whim. Then why would Amnesty International recommend that this Act be repealed?

I don’t think they are going into the actual facts of the cases, they are only looking at one side of the story and disregarding the state’s point of view. They are being driven by certain elements, which tends to create a type of misinformation [about the issue]. Amnesty are taking a one sided approach. They are meeting separatist leaders whose agenda would benefit from the release of such information and they are getting carried away by this type of information instead of finding out more.

Why don’t they talk to the magistrate’s authority, or to people like me? We are dealing with a dangerous situation for the past 20 years. Just the other day, a senior cleric was killed for his comments against the use of violence, so they obviously don’t know the situation on the ground.

Are you suggesting that Indian-administered Kashmir is not a normal place and the PSA is a law that would not be applicable in a place where there are no so-called terrorist activities?

This PSA does exist in other parts the country; it is called the National Security Act. NSA there, PSA here. There is not special law for Kashmir, it is under a different name because the state of Kashmir has got a separate constitution to the rest of India.

But the report says that these administrative detentions in Kashmir far outweigh the national average in India.

I find that hard to believe. There are other states experiencing disturbances, with larger populations, so this is probably not true.

There is not [a] link between the figures. People who were placed under PSA have been accounted for. As far [as] this claim that so many thousands are missing, people should let us know who the people are and we will deal with each case individually. And there is no official figure. A large number of people have gone out [of the country] and have gone to Pakistan for training and they are probably still there. A large number also became militants and have been killed. To make it out that all these people have disappeared as a result of the state is totally incorrect and is a distorted way of putting it.

Is it not distorted to suggest that enforced disappearances have not taken place? What about the mass graves that were found in the districts of Baramullah and Kupwara?

There may have been reports that this has happened, and this is not to say that the state has not taken action in particular circumstances. The graves are made up of mostly Pakistani fighters who have come across into Kashmir. But anyone who has been following the case of Kashmir, would be fully knowledgeable of the fact that large numbers crossed over into Pakistan, and they continue to live there.

In those cases where the state has ‘taken action’, Amnesty International says that where there is “systematic” disappearances – this amounts to a crime against humanity. Is the state not accountable for these actions?

I don’t understand why Amnesty is using international law here. We have a constitution, a judicial system; it is all functioning. We are not in conflict with any country, and we are not contravening any law of the land. In cases where something has gone wrong, we have taken action. There are laws and courts. We provide for every kind of justice.

But as it stands, the PSA and the Armed Forces Special Powers Act (AFSPA) gives forces in the region special rights and stands in the way of justice.

It’s difficult for me to comment on the AFSPA.

Okay, but with most of the violence, detentions and disappearances taking place in the 1990s, is the situation in Kashmir ‘so bad’ that AFSPA still needs to exist?

AFSPA was implemented when the situation required it. It was to protect the forces from being maligned. It does not give any extra power to what is already there under law.

But a complaint against the security forces has to gain permission from the central government in order to move ahead, and this is rarely forthcoming. This gives impunity to the armed forces operating in Kashmir.

This is purely conjecture; there is protection for the forces when they are acting under the AFSPA. Yes, the government has to grant permission. But when permission is granted that someone has to be prosecuted, then it is sanctioned. The requirement of gaining permission is to simply to protect security forces from malicious prosecution.

But the opposite is happening. Kashmiris are not able to gain permission?

This is incorrect, right now we have a trial of a commander going on, in an incident that took place here.

Is this the norm though?

You see, allegations of a crime does not mean it happened, and you must understand that we are fighting a particular situation. There is propaganda and attempts by the various organisations, including militant organisations, many in the form of NGOS, posing to be activists, do try to take advantage of the situation. You can see the type of report Amnesty International has produced, you have seen how they have pushed a one-sided opinion based on information given by those with an agenda.

But if we relied on state organs then we could easily say that the Indian state is also providing a one sided perspective, especially if you do not allow the UN working group on enforced and involuntary disappearances or the UN working group on arbitrary detention to come into the region to do an investigation, as they have reportedly requested.

We are a sovereign country, and we have a right to deal with our own issues under the premise of our laws. We have not excluded ourselves from external scrutiny. We have even invited international observers for the elections, we have foreign ambassadors visiting Kashmir all the time.

Yes, what about the UN working group on enforced and involuntary disappearances?

Again, we are a sovereign country, and these are issues I understand would be discussed at higher diplomatic level, and as a police officer, I am not able to answer that. But we have allowed other international organisations to come here. The fact that Amnesty International operates in the valley is testament to the fact that we are open to investigations.

But what about people who are unhappy with the fact that a family member has disappeared. Does the law protect them?

The first step is to come to the station and file a First Information Report (FIR) and we will take action after that. And this will depend [on whether] our investigations lead us to the uncovering of crimes that may have been committed by the security forces. As I said before, in the majority of case, they have gone to Pakistan for training. 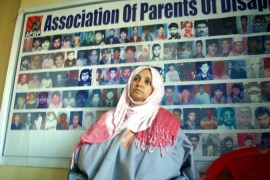 Waiting for a disappeared son

Parveena Ahangar explains why waiting for a disappeared son to return is like taking a slow poison.