At least 17 people have been killed in a string of deadly storms across the US south in what has become one of the nation’s deadliest storm seasons.

Authorities on Saturday said that seven people had been killed in the US state of Alabama, another seven in Arkansas, two in Oklahoma and one in Mississippi.

Of the seven killed in Arkansas on Friday, three were children, while the two in Oklahoma, killed late on Thursday, were elderly sisters, authorities said.

Six of the seven fatalities in Arkansas were caused when uprooted trees smashed into houses, John Robinson, a National Weather Service meteorologist, said.

One person was reported dead in the state of Mississippi on Saturday, where tornadoes have damaged dozens of homes and businesses.

Storms, some severe, are expected on Saturday from the Florida Panhandle through eastern and southern Georgia, the Carolinas and Virginia, according to weather.com, while fire danger continues over the dry southern plains.

Tornadoes kill about 70 people in the United States each year. 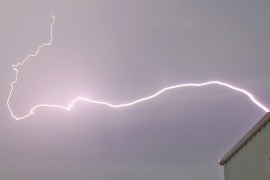 Thunderstorms have brought huge hail stones, torrential rain and damaging winds to many parts of the country. 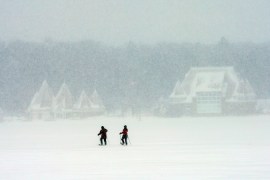 Winter drags on for North America