Hundreds of traders in Burkina Faso have taken to the streets of Ouagadougou, setting fire to the headquarters of the country’s ruling party in protest after mutinous soldiers looted their shops.

Merchants  on Saturday ransacked the National Assembly, the trade ministry and other public buildings in the capital, according to a witness quoted by the Reuters news agency.

“We are angry against the soldiers who have looted our stores, and also against the government that is doing nothing to stop the looting,” Abdoulaye, a mobile phone trader who declined to give his second name, said.

“Among us are people who have lost everything … and do not even know yet whether they will be reimbursed. We’re fed up.”

The Associated Press reported witnesses as saying soldiers had robbed hotels early on Saturday and were continuing to loot shops and steal cars.

The merchant’s protest follows a mutiny by soldiers on Thursday who demanded the payment of promised bonuses.

Shooting was also reported at the presidential compound.

The mutiny prompted Blaise Compaore, the president, on Friday to sack his government, the army chief and his head of presidential security.

Compaore,  who came to power in a 1987 military coup, has faced a series of protests since February, staged first by students and then by soldiers.

The president strove to reassert his authority on Friday, holding talks on the grievances of the soldiers, which included housing and food allowances.

A military source later said that their demands had been met.

Burkina Faso ranks 161 out of 169 countries on the UN’s Human Development Index, a composite measure of life quality. 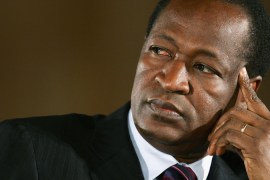 Blaise Compaore issues decrees announcing appointment of officials who will be in charge until a new cabinet is named. 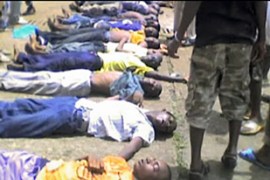 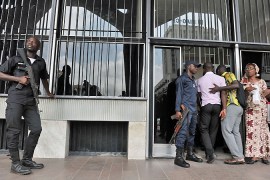