Syrian security forces have fired upon people in the village of Baida, near the coastal town of Baniyas in the country’s northwest, injuring at least one person, witnesses tell Al Jazeera.

Security forces have so far arrested 200 residents in Baniyas as challenges to the rule of Bashar al-Assad continued to spread, according to a human-rights lawyer.

“They brought in a television crew and forced the men they arrested to shout ‘We sacrifice our blood and our soul for you, Bashar’ while filming them,” the lawyer, who was in contact with residents in Baida, said.

The lawyer, who did not want to be further identified, said the events occurred on Tuesday.

Gunfire was heard earlier in the day and one man was killed, they said.

They said Baida was targeted because its residents participated in a demonstration in Banias last week in which protesters shouted “The people want the overthrow of the regime” – the rallying cry of the Tunisian and Egyptian revolts.

One activist said some residents of Baida had weapons and it appeared that an armed confrontation had erupted.

But Sheikh Anas Airout, an imam in nearby Banias, said Baida residents were largely unarmed and that they were paying the price for their non-violent quest for freedom.

“The gunfire against Baida is intense like the rain. At least one person was injured,” another witness said, describing the violence in the village, which is 10km south of Baniyas.

“What we are hearing from residents [in Baida] is that there has been a campaign of arrests, those who have been detained are taken to the main square … and eyewitnesses say they are being brutally beaten,” reported Al Jazeera’s Rula Amin from Damascus.

“The goal of the attack is probably the arrest of Anas al-Shukri [one of the leaders of the opposition movement],” a human rights activist, who wished to remain anonymous, said.

Al-Shukri told the AFP news agency that security forces and the army were “continu[ing] to assault Baniyas”.

The AP news agency reported that pro-government armed men were also attacking the village of Beit Jnad, near Baida, on Tuesday.

In another development, about 600 Kurds held a one-hour long peaceful protest demonstration in the village of Ain Arab in the northern part of Syria, Radif Mustapha, head of the Rased Kurdish human rights group, told AFP.

The protesters were calling for reforms and the release of political prisoners.

Against this backdrop of political tensions, Al Jazeera’s Amin reported that an opposition delegation from the city of Daraa – where protests against the government first began several weeks ago – met a high-level government official on Tuesday.

“The people of Daraa had a delegation led by the imam of the Omari mosque [where protests started] … met Syria”s vice-president Farouk al-Shara. This is a very significant step,” she said.

“The people we spoke to, including this imam, told us that they met the vice-president, they gave him their list of demands, some have to do with Daraa – like pulling out the heavy security that’s stationed there, releasing all prisoners – and some demands have to do with all of Syria, like lifting the state of emergency law, giving them more political freedoms and to stop the heavyhandedness of security forces in their daily lives.”

The opposition also demanded that the status of those who are still missing after the protests were broken up by security forces be revealed, and that the families of those who were killed during protests in Daraa be provided a monthly salary.

“What the government wants of course is for the protests to stop, and so far, of course, there is no conclusion. But according to the delegation … preparations are underway to arrange a meeting between a delegation from Daraa and the president himself. Maybe as soon as tomorrow,” our correspondent said.

The official Sana news agency said nine soldiers, including two officers, were killed on Sunday when their patrol was ambushed outside Baniyas, 280km northwest of Damascus.

Residents of Baniyas say there is a shortage of bread in the city, and that electricity and communications services are intermittent, if not cut entirely.

Abdelbasset, an electrician, told AFP that the situation was “extremely bad”.

“The army was redeployed outside the city and the security forces and shabbiha [government agents] conducted a number of arrests. The town is dead, shops are closed,” he said.

“Baniyas is surrounded by tanks, no one can get in or out. It is like a prison,” said Yasser, a shopkeeper.

Sheikh Mohammed, a preacher, said: “Several families evacuated women and children [to the outskirts of the town], because we are in the Ras Al-Nabee neighbourhood which was targetted by gunfire from Al-Quz neighbourhood.”

The interior ministry on April 9 warned that the government would deal harshly with “armed groups” who “shoot indiscriminately” on “both demonstrators and security forces”.

The state media criticised on Tuesday “those sowing trouble, disorder and discord when Syria has already begun to address the problems and pave the road for change and reform”.

The White House on Tuesday condemned what it called Syria’s repression of protests, terming it “outrageous” in a statement where it expressed concern about the reports of wounded people being denied medical care.

The British government, meanwhile, has urged Syrians to remain “cautious” when in public places.

“We recommend those in Syria exercise caution and maintain a high level of security awareness, particularly in public places and on the roads, and avoid large crowds and demonstrations,” Alistair Burt, the Foreign Office minister for the Middle East, said in a statement on Tuesday.

The UN has called for a halt to the “use of force against peaceful protesters” in the country.

“The [UN High Commissioner for Human Rights] has emphasised to the Syrian authorities that the use of force against peaceful protestors has not quelled discontent anywhere in the region and to take immediate action to stop the excessive use of force, particularly the use of live ammunition against peaceful protestors,” said
Ravina Shamdasani, spokeswoman for the UN High Commissioner.

Iran’s foreign ministry, on the other hand, termed anti-government protests in Syria a Western plot to undermine a government that supports “resistance” in the Middle East.

“What is happening in Syria is a mischievous act of Westerners, particularly Americans and Zionists,” Ramin Mehmanparast, a spokesman, said on Tuesday.

Protests that erupted in Syria more than three weeks ago have steadily grown, with tens of thousands of people calling for sweeping reforms to the country’s political system.

The Associated Press news agency said the Damascus Declaration, Syria’s leading pro-democracy group, had urged leaders of the Arab League to impose sanctions on al-Assad’s government, and put the death toll from the unrest at more than 200. 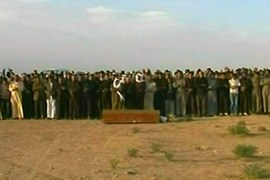 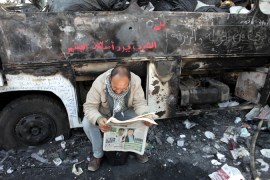 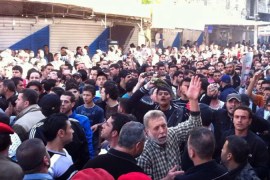