A Bahraini businessman who was a member of the leading Shia opposition group Wefaq died in police custody on Tuesday.

There was no immediate reaction by state media to the reported death and officials were not available to comment about Kareem Fakhrawi’s death.

Fakhrawi’s was the fourth known death in police custody in recent days. Bahrain’s government denies there is torture in Bahrain and says all such allegations will be investigated.

Mattar Mattar, a member of Wefaq, said Fakhrawi had died in police custody, a week after he never returned home from a police station where he had tried to complain about his house being demolished by police.

“Either he was sick and didn’t receive treatment or was tortured,” Mattar said.

Wefaq said on Tuesday three Shi’ite doctors and several staff from the Education Ministry had been arrested on Monday, bringing the total number of detainees to 453.

“After these problems, many are afraid to contact us,” said Mattar. “I estimate the real number is not less than 600. That’s one in every 1,000 Bahrainis,” he said.

Bahrain said on Monday it had released 86 people held under martial law while “legal measures” were being taken against other detainees.

The daughter of a prominent Bahraini activist has said she is beginning a hunger strike in protest over the arrest of her father, husband, brother-in-law and uncle.

Zainab Al-Khawaja said on Monday that she would refuse food until her father Abdulhadi, who she says was beaten unconscious before being taken away, and other relatives are released.

Three of the men were detained following a police sweep on Zainab’s house over the weekend, while her uncle was arrested three weeks ago.

She announced her hunger strike in a letter addressed to Barack Obama, the US president, posted on her blog Angry Arabiya.

“I chose to write to you and not to my own government because the al-Khalifa regime has proven that they do not care about our rights or our lives,” she wrote.

“I demand the immediate release of my family members. My father: Abdulhadi Al-Khawaja. My husband: Wafi Almajed. My brother-in-law: Hussein Ahmed. My uncle: Salah Al-Khawaja.”

The US, whose Fifth Fleet is stationed in the Gulf island kingdom, has offered only muted criticism of the government crackdown and analysts say it refrained from pressing Bahrain due to anxieties over interference from its rival Iran, just across the Gulf.

It appeared to be the first time an activist has gone on hunger strike since the Bahraini government began its crackdown on protesters last month.

Abdulhadi Al-Khawaja, the former president of the Bahrain Centre for Human Rights, was arrested amid a continued crackdown on pro-democracy activists in the tiny Gulf nation.

Zainab said her father had been calling for democracy and had been saying that the country’s rulers were guilty of killing, torturing and detaining people, and should be put on trial.

On Monday Bahrain said it had released 86 people held under martial law while “legal measures” were being taken against other detainees.

More than 400 people have been arrested and dozens have gone missing since the crackdown began on March 16, Wefaq has said.

Bahrain has also put two Iranians and a Bahraini on trial on charges of spying for Iran’s revolutionary guards.
“They are accused of contacts with the Iranian Revolutionary Guard to give them military and economic information from 2002 to April 2010 … with the intention of damaging the national interest,” the Bahrain News Agency said. 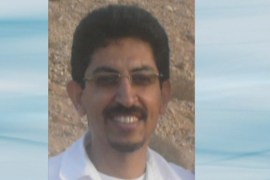 Plainclothes policemen drag away Abdulhadi Alkhawaja from home amid reports of continuing crackdown on protesters.