At least 13 people have been killed and around 100 others injured in religious clashes with Muslims in the Egyptian capital Cairo.

The deaths on Tuesday occurred in the working-class district  of Moqattam after at least 1,000 Copts gathered to protest the burning of a church last week.

It was the second burst of sectarian fighting in as many days and the latest in a string of violent protests over a variety of topics as simmering unrest continues nearly a month after mass protests led to the ouster of President Hosni Mubarak.

Al Jazeera’s Ayman Mohyeldin, reporting from the capital Cairo, said that Christians were demanding “an end to what they describe as discrimination by the state.”

“The military intervened to prevent further clashes, but the episode underscores the simmering tension between the two communities,” he said.

Fighting broke out mid-afternoon, and people threw rocks from both sides. Witnesses said soldiers at the scene fired shots into the air to disperse the crowds.

The protest outside Cairo’s radio and television building also came a day after at least 2,000 Copts demanded the re-building of the torched church, and that those responsible be brought to justice.

The Shahedain [Two Martyrs] church, in the Helwan provincial city of Sol, was set ablaze on Friday after clashes between Copts and Muslims left at least two people dead.

The violence was triggered by a feud between two families, which disapproved of a romantic relationship between a Christian man and a Muslim woman in Sol.

“Problems escalated in the village when a group of Muslims headed to the burned out church and conducted a mass prayer there,” Maged Ibrahim, a local resident told state television.

On Monday, Egypt’s ruling military council vowed to have the church rebuilt and prosecute those behind the arson attack.

There is a long history of animosity between Copts and Muslims in Egypt, though there have been recent signs of a rapprochement following a deadly New Year’s Day bombing of a church in Alexandria and during the recent popular uprising that unseated long-time president Mubarak.

Twenty-one people died and dozens more were wounded when what was believed to be a suicide bomber blew himself up just after midnight on New Year’s as worshippers left a church in the port city of Alexandria.

No one has yet claimed responsibility for the attack, which came after an al-Qaeda-linked group said it was behind a deadly church hostage-taking in the Iraqi capital of Baghdad,and threatened Coptic Christians as well.

But as Copts celebrated their Christmas on January 7, thousands of Muslims gathered at churches across the country, forming human shields to protect them as they worshipped.

And during anti-Mubarak protests in Cairo in January, there were also cases of Copts doing the same for Muslims as they prayed in Tahrir Square.

Christians, who make up about 10 per cent of Egypt’s 80 million population, complain of systematic discrimination and have been the target of several  sectarian attacks. 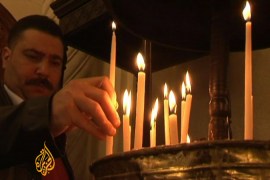 Months after a bomb in a church killed 20, Christians put faith in a new era of peace.