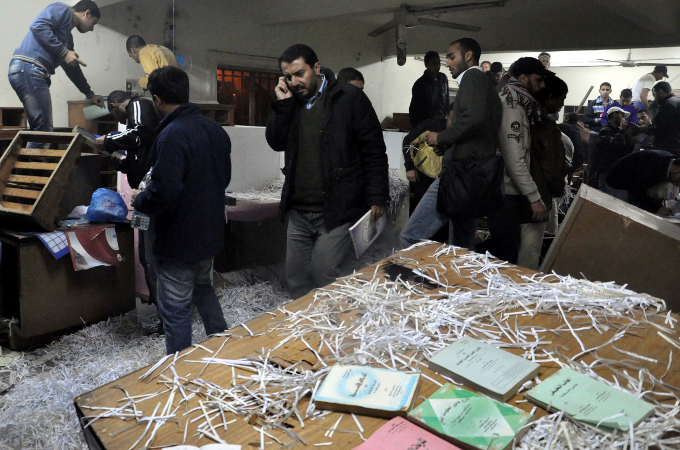 The protesters who stormed the offices of Egyptian state security this weekend say the buildings are proof of “the greatest privacy invasion in history”, filled with transcripts of phone conversations, surveillance reports and stark reminders of the torture carried out inside.

Hundreds of protesters seized the state security building – a prominent symbol of the Egyptian government’s brutality – after hours of protests in 6th of October City on Saturday night.

They were at first blocked from entering the building for several hours, and some demonstrators started to show up with tents and food supplies; one said he expected it to become “another Tahrir Square”, referring to the downtown plaza where protesters camped out for weeks to force president Hosni Mubarak to resign.

But the Egyptian army allowed them to enter at around 8pm on Saturday evening, and arrested many of the state security officers working inside.

The takeover was the climax of several days of protests outside other state security buildings.

Protesters broke into the building in Alexandria on Friday night, after clashing with security forces, and on Saturday they entered the headquarters in the central city of Assiut.

In 6th of October, some of the most incriminating documents have already been destroyed.

One photo from inside the state security building showed a room full of shredded papers, the pile reaching almost to the ceiling.

Egyptians who entered the building also found computers and hard drives that had been destroyed.

And a video posted on YouTube shows the charred remains of a massive pile of documents that state security apparently set on fire in the courtyard of the building. Fires have also been reported at other state security offices in recent days.

“We found out from neighbours that the burning has been taking place for four days now,” said Mosa’ab el-Shamy, a pharmacy student who was among the protesters.

“But it really started to pick up after the protests in Alexandria.”

Thousands of documents were intact, though, and many have now been handed over to the public prosecutor, who received a warm welcome when he visited the building on Saturday night.

Photographs of dozens of documents have also been posted on Facebook and Twitter, though witnesses said the army searched people leaving the building to make sure they did not take documents with them.

Some of them show surveillance of prominent Egyptians: There are transcripts of phone calls made by Mohamed ElBaradei, for example, or by Hamdi Kandil, a journalist who was a fierce critic of Mubarak’s regime. Other files documented the lives of ordinary citizens.

“There were files about political activists,” el-Shamy said. “And I saw one about a Somali living in Egypt. He was under observation; the file noticed that he prayed a lot, it had information about his family, how long he has been in Egypt.”

Documents described by protesters also showed evidence of vote rigging during last year’s parliamentary elections in Egypt (which many observers at the time called fraudulent). The documents contained lists of candidates from particular districts, and the number of votes each candidate would receive.

Several Egyptians reported finding a whole room full of what appeared to be sex tapes. A photo posted on Twitter showed one tape labelled: “Sexual encounter between a Kuwaiti princess and an Egyptian man.” 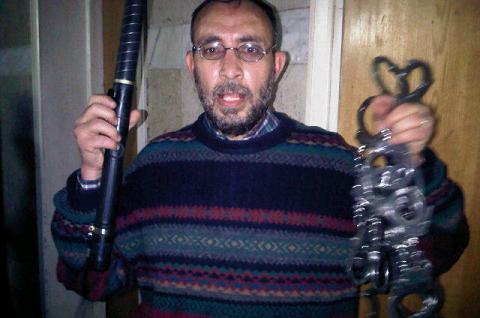 The building also contained stark evidence of the torture and abuse many detainees suffered inside. One photograph from Twitter showed a man holding up an electric baton and a cache of handcuffs. Another photo showed a barren cell, with nothing but a toilet in the floor and a tap against the wall for drinking and washing.

El-Shamy said protesters found a closet full of “belly-dancing outfits”, which he speculated were used for some kind of “psychological torture”.

It was a moment of catharsis for many of the protesters, some of which endured detention and abuse within these very buildings.

“Entering the building was a very emotional moment. I worked as a psychiatrist in the Nadim centre for the rehabilitation of victims of torture for three years, and I have heard so many stories of abuse and torture on the hands of normal police and state security,” said Mostafa Hussein, one of the protesters who stormed the 6th of October building.

Hossam al-Hamalawy, an Egyptian activist and blogger, tweeted about finding the detention centre where he was once held.

“Entered the small compound where I was locked. Man, I can’t believe it still,” he wrote. “Many are literally crying. We can’t find the interrogation rooms. This is a citadel.”

Protesters say they hope the documents are used to prosecute state security officers – starting with Habib al-Adly, the former interior minister now on trial for corruption. The public prosecutor has said he will “examine” the documents.

Egypt’s new interior minister, Mansour El-Essawy, pledged on Sunday to “take all necessary measures to restore confidence between the citizens and the police”.

The country’s new prime minister, Essam Sharaf, urged protesters to return any documents they took from the state security buildings, warning of the “dangerous nature of their contents”.

“I don’t think it’s in any way less historical than when Germans stormed the Stasi headquarters and took control of the files,” Hussein, the protester, said.