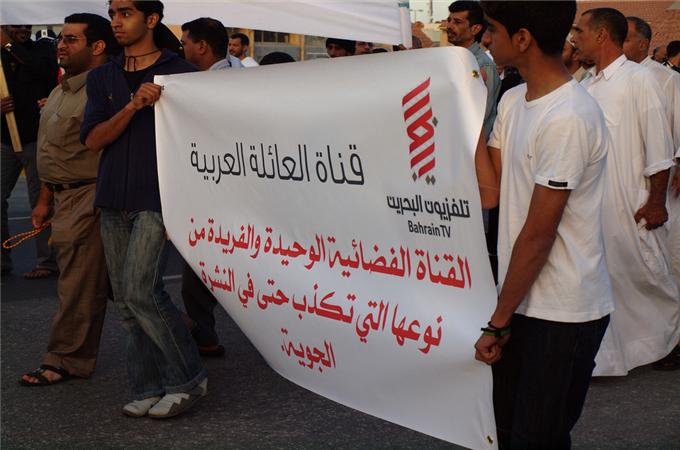 It was one of two anti-government rallies held in Bahrain on Friday. One group of protesters – estimated by witnesses to be in the tens of thousands – marched from the prime minister’s office to Pearl Roundabout, the intersection in Manama which has become the symbolic heart of the protest movement.

That rally was organised by the country’s six formal opposition parties, which had submitted a list of demands to the crown prince one day earlier.

The other rally, organised by Bahraini youth, marched on the state television building in Madinat Isa, a small village 15km south of the capital.

The competing rallies ostensibly had similar goals: Demonstrators at both called for political reforms, such as empowering the parliament and electing a new prime minister.

But they also highlighted what seems to be a deepening split within Bahrain’s protest movement, between a formal opposition committed to dialogue with the ruling al-Khalifa family, and a youth movement increasingly committed to toppling the monarchy.

The protesters in Madinat Isa started their march in two locations: The ministry of labour, and the central statistics office.

Both have symbolic value, the former because it has failed to provide jobs for many unemployed Bahrainis, the latter because it counts how many Bahrainis are Sunni and how many are Shia – a division the government has sought to exploit in recent weeks, portraying the protests as sectarian affairs.

“We are Sunni and Shia, and this country is not for sale,” the protesters chanted, a reference to the government’s practice of offering citizenship to foreigners – many from Pakistan, Syria and Jordan – who serve in the army or the interior ministry.

The protesters accused Bahrain’s state-run media of trying to reinforce sectarian divides, calling it qanat al-fitna, the “channel of strife”. 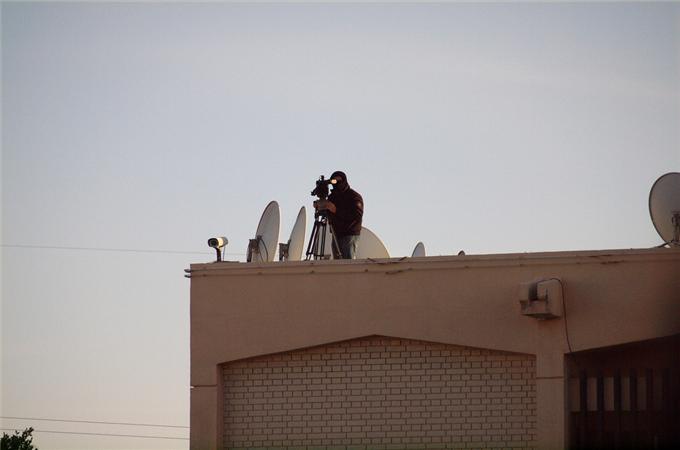 At one point, a Bahrain TV cameraman – wearing a balaclava to cover his face – climbed to the roof of the building to film the protests. “Show this live!” the protesters yelled.

The protesters were entirely peaceful, as they have been since the rallies started on February 14. A group of Bahraini police stood just inside the fenced-in information ministry compound, equipped with riot gear and water cannons (several protest veterans said this was the first time they had seen water cannons in Bahrain). But they remained inside the ministry’s gates.

Atop a nearby police station, a group of men – dressed in street clothes, not uniforms – appeared to take photographs of the protesters using cameras with high-powered lenses.

Activists said this was the first time they had marched on state television – and that Bahrain’s organised political parties were afraid to take part.

“The political societies don’t want to be involved with any protest where there might be a crackdown,” said Yousef al-Muhafdah, a human rights activist.  “That’s why they are at the Manama rally right now. But what’s the point of that rally? What is their message? They’re marching to Lulu [Pearl Roundabout], where everybody is their friend or colleague. Why?”

Mistrust was a common theme among many of the protesters outside the information ministry. The royal family has offered “dialogue” before, but those talks have led to few meaningful reforms.

Several protesters mentioned the Bahraini national assembly, which was created after years of protests and demands by opposition groups.

“We asked for a parliament in the 1990s. They gave it in 2002, and it has no power; the king can do what he wants, the prime minister can do what he wants,” said Ahmed, a human resources consultant who would not give his last name. “We don’t trust this government anymore.”

Nor have activists forgotten the government’s brutal crackdown on protesters in Pearl Roundabout last month, which left seven dead and hundreds injured.

Driving back to Manama from Madinat Isa, Saeed Ahmed recounted his own brutal beating last month at the hands of Bahraini soldiers.

“They chanted allahu akbar [God is great] while they beat me with batons,” he said, showing a photo of his bloodied face on his mobile phone.

“You can’t have a dialogue with the person who killed your friends the day before,” he continued. “The things I saw in Lulu… I cannot forget those things.”

Human rights organisations are planning to file a criminal case against the king over those seven deaths.

They expect the case will be dismissed by Bahraini courts – “the king is treated like God here,” Youssef said – so they plan to appeal it at the International Criminal Court in The Hague.

Saeed criticised the formal opposition parties for moving too cautiously against the government.

They presented a list of demands to the crown prince on Thursday, but Saeed said they did not threaten any consequences if the government ignores those demands.

“You know, they raised demands for dialogue, but they didn’t include effective pressure,” he said.

“They didn’t say, we will raise the ceiling… that if you don’t give in to our demands in three weeks, we will join the people and call for the end of the monarchy.”

Indeed, many of Bahrain’s young protesters seem to be losing their patience with the Khalifa family.

Protesters chanted yasqat Hamad – “down with Hamad,” referring to King Hamad bin Isa al-Khalifa – outside the information ministry. A few protesters also held signs that read, “no to constitutional monarchy”.

Ahmed, the HR consultant, said he would accept a monarchy modelled after the United Kingdom, but said not all of the protesters shared his view. “Some don’t want the royal diwan to exist anymore,” he said.

Protesters initially confined themselves to Pearl Roundabout, but in recent days they have spread out, taking their demonstrations to key government buildings.

They rallied outside the interior ministry on Wednesday, and several demonstrators have now suggested taking a future rally to Hamad’s palace.

“The next step, maybe, is to march on the king’s palace. We’ll see if he can handle the pressure,” Saeed said. “That would be a logical next step.”

“I don’t know if it’s a question of pressure,” Youssef replied. “But can we handle the bullets?”

“We did once before,” Saeed said.