Up to one million people have fled Ivory Coast to safer areas amid fears of an all-out civil war, the UN refugee agency has said.

The office of the UN High Commissioner for Refugees (UNHCR) and other aid agencies said they have been unable to access the country’s west due to the fighting in the capital and other areas.

It cited estimates of between 700,000 and one million people displaced, largely from the city of Abidjan, including the heavily-populated districts of Abobo, Adjamame, Williamsville and Yopougon.

“The massive displacement in Abidjan and elsewhere is being fuelled by fears of all-out war,” Melissa Fleming, a spokeswoman for the UN High Commissioner for Refugees, on Friday said in Geneva.

She said the closure of banks and businesses is also causing economic chaos in the West African country, with rising unemployment and food prices.

Just over a week ago the UNHCR put the number of displaced in Ivory Coast at around half a million, Fleming said, adding that the latest estimates were made by the agency’s own staff on the ground.

The UNHCR and the International Organisation for Migration (IOM) warned that the situation in the rural west of Ivory Coast was uncertain, with fighting going on in the area.

Fatoumata Lejeune-Kaba, a UNHCR spokeswoman for Africa, said new pockets of displaced people were being found inside Abidjan daily, although many appeared to be fleeing to the north, centre and east of Ivory Coast.

“It’s our best estimate,” she told AFP. “Those leaving Abidjan are many more than those staying.”

The International Committee of the Red Cross (ICRC) revealed on Friday that it was setting up aid for just 3,000 people found in the western town of Toulepleu during an evaluation mission about a week ago.

The town normally has 40,000 to 50,000 inhabitants, but most had fled nearby or into Liberia, the agency said.

“The town is devastated, no house has been spared and the hospital was abandoned and looted,” Dominique Liengme, the ICRC Abidjan delegation chief, said.

Meanwhile the UN came under pressure to ban the use of heavy weapons in the country amid heightened concern for the safety of civilians caught up in a bloody leadership stand-off.

During a Security Council discussion on a draft resolution submitted by France and Nigeria, Gerard Araud, the French envoy to the UN, acknowledged the “humanitarian tragedy in Cote D’Ivoire”.

“Law and order is collapsing, humanitarian access is more and more difficult; hospitals and schools are closing, several hundreds casualties and maybe more,” Araud said. “We are very close to a civil war in Abidjan.”

The draft resolution would also impose an international travel ban and freeze the assets of Gbagbo and other senior figures.

The International Crisis Group (ICG), in an open letter to the Security Council, warned of ethnic cleansing and mass atrocities if the UN peacekeeping mission was not strengthened, saying “civil war in the country has been re-ignited”.

The total death toll is at least 462.

The ICG think tank warned that the UN’s reputation was at stake.

“The UN’s posture in the country must change, and UNOCI must be required to use force when necessary to carry out its mandate effectively,” it said. 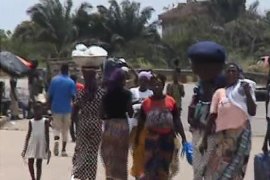 Tens of thousands of people have been forced to flee to Liberia due to fresh unrest in the West African country. 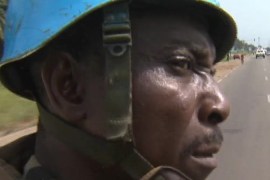 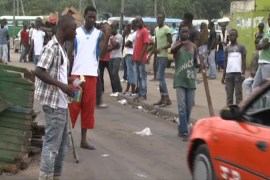 Ouattara supporters advance on Gbagbo stronghold in Abidjan on another day of heavy fighting in Cote d’Ivoire.

Law and order breaks down, 10 dead and dozens injured in Abidjan as Gbagbo forces fight Ouattara supporters for control.