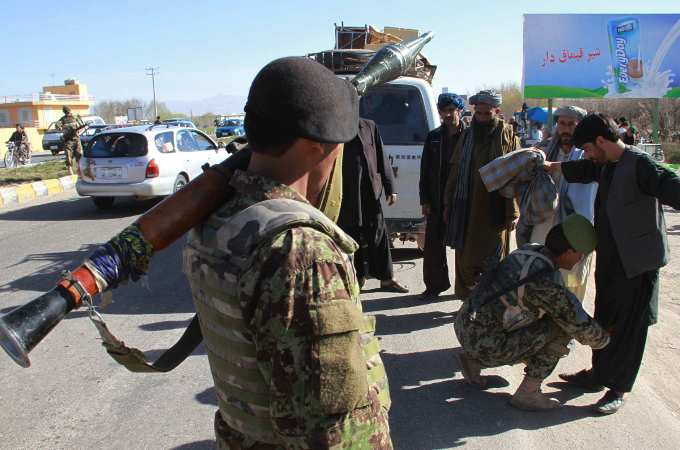 Afghan forces will take the lead for securing seven areas of the country, relegating NATO forces to a “supporting” role, according to a plan unveiled by Afghan president Hamid Karzai.

Karzai’s plan covers three full provinces: Bamiyan, Panjshir and Kabul, all of them among the most secure in Afghanistan. (One district of Kabul province, Surobi, will be excluded, and Afghan troops already handle most day-to-day security in the capital.)

It also includes four cities: Mazar-i-Sharif, in the north; Herat, in the west; Lashkar Gah, in the south; and Mehterlam, the capital of Laghman province.

The handover will occur in July, Karzai said on Tuesday.

“The Afghan nation doesn’t want the defence of this country to be in the hands of others anymore,” Karzai said, striking a nationalistic tone.

Karzai urged members of the Taliban to enter negotiations with the government. He also sought to downplay the long-term role of NATO forces in Afghanistan. Tensions between the two sides continue to rise, fuelled by civilian deaths and unpopular “night raids.” A botched NATO raid earlier this month killed one of Karzai’s cousins.

“The main aim of the international forces was not to assist Afghan democracy, but to wipe out the terror of the Taliban and Al Qaeda,” he said.

The handover coincides with a US plan to withdraw a token number of troops from Afghanistan this summer. General David Petraeus, the commander of US and NATO forces in Afghanistan, said in congressional testimony earlier this month that he did not know how many soldiers would be removed.

A showpiece in Lashkar Gah

The provinces slated for handover are among the safest in Afghanistan: In the central province of Bamiyan, for example, insurgent groups carried out just four attacks in 2010, according to data from the Afghanistan NGO Safety Office. Panjshir, too, has long been a centre of anti-Taliban activity. 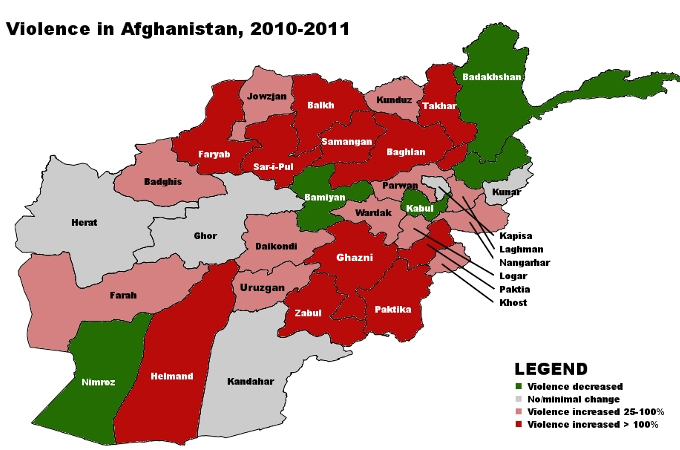 The transition will also cover four cities (in addition to Kabul, the capital). One is Herat, a western city whose predominantly Tajik population has never been receptive to the Taliban. Violence in surrounding areas has slowly increased over the last three years, but the city itself is fairly secure, an easy project for Afghan security forces.

A second city is Lashkar Gah, the capital of Helmand province, one of Afghanistan’s most violent. It too is far more secure than the surrounding province; indeed, many Helmand residents have fled their homes in outlying areas for the relative safety of the capital.

Afghan soldiers stationed in Lashkar Gah are considered among the country’s best, and they have received better training and equipment than many of their counterparts. NATO will also maintain a large base in the city, though officially its soldiers will be tasked with supporting Afghan units.

Helmand has been the focus of a major push by NATO troops over the last year, with tens of thousands of additional troops deployed in the province.

Outside of Lashkar Gah, though, analysts say many army and police units are poorly prepared to provide security. A recent report by the International Crisis Group called them a “poor match for the Taliban.”

Attrition remains a key problem: NATO wants to have 305,000 Afghan army and police by October, with an eventual goal of 375,000. But tens of thousands desert the force each year: Figures from 2010 show a police attrition rate around 23 per cent, and an army attrition rate as high as 32 per cent.

Lieutenant general William Caldwell, the US general who heads NATO’s training mission, said earlier this month that 98 per cent of the desertions come from field units. They fled, among other things, because of the fierce fighting: Nearly 3,600 Afghan soldiers and police have been wounded since January 2007, according to data from the US Congressional Research Service.

Among those soldiers and police who don’t quit, corruption, theft and drug use are rampant problems.

The police have been singled out for particular criticism: A report released last year by CNA, a US government-funded research institution, faulted the police for corruption and poor leadership. Thousands of Afghan police, perhaps tens of thousands, have not received any training at all.

“Recruits, drawn from the lowest rungs of village life, were hobbled by illiteracy and, in some cases, physical and mental shortcomings. Senior police leaders routinely robbed their men of their pay and equipment,” the report noted.

US and NATO officials have generally spoken with optimism about the training efforts, though Petraeus did acknowledge at a congressional hearing last week that parts of the army and police are ill-trained.

“Our Afghan partners are the first to note that the quality of some elements is uneven,” he said.