Crowds have set fire to the courthouse and other buildings on a third straight day of demonstrations in the southern Syrian city of Daraa.

Residents said one person was killed and scores injured when security forces used live rounds against protesters. Witnesses said dozens were also taken to be treated for tear gas inhalation at the main Omari mosque.

Thousands took to the streets on Sunday, calling for an end to corruption and 48 years of emergency law and to protest the killing of five civilians in a similar demonstration two days earlier.

The headquarters of the ruling Baath party was set ablaze as well as two phone company branches. One of the firms, Syriatel, is owned by President Bashar al-Assad’s cousin Rami Makhlouf, who is under specific US sanctions for what Washington regards as public corruption.

“They burned the symbols of oppression and corruption,” an activist said. “The banks nearby were not touched.”

An AFP correspondent said protesters also tried to march on the home of the town’s governor, but security forces used warning shots and tear gas to stop them.

“No. No to emergency law. We are a people infatuated with freedom,” marchers chanted as a government delegation arrived in the city to offer their condolences for victims killed on Friday.

Syrian authorities have announced that they would establish a commission to investigate the deaths.

Al Jazeera’s Rula Amin, reporting from Damascus, said the government was trying to contain the unrest, to prevent it from spreading to other parts of Syria.

“They’ve made very clear indications that they’re going to sack and dismiss local security officials who are responsible for those killings, and the governor of Daraa,” she said.

Friday’s protest was fuelled by the arrest of 15 schoolchildren detained for writing pro-democracy graffiti inspired by the uprisings in Tunisia and Egypt.

The children were arrested in Daraa earlier this month after graffiti appeared on school walls and on grain silos with phrases such as “the people want the overthrow of the regime”.

The government said in a statement on Sunday that the children would be released immediately.

Daraa is primarily an agricultural community, and the economy has been hurt by falling water levels in recent years. The region also houses thousands of people who left their homes in eastern Syria because of an ongoing water crisis.

A silent protest in Damascus by 150 people this week demanded the release of thousands of political prisoners. At least one activist from Daraa, Diana al-Jawabra, took part in the protest. She was arrested on charges of weakening national morale, along with 32 other protesters, a lawyer said.

Jawabra was campaigning for the release of the 15 schoolchildren from her home city. Another prominent woman from Daraa, physician Aisha Aba Zeid, was arrested three weeks ago for posting a political opinion on the internet.

Residents say the arrest of the two women deepened feelings of repression and helped fuel the protests in Daraa, close to the border with Jordan.

Smaller demonstrations have also been held in the central city of Homs, and the coastal city of Banias.

The non-violent protests started last Tuesday after calls on Facebook demanding greater freedom in the country, which has been under emergency law since 1963. 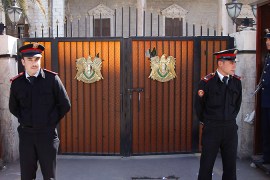 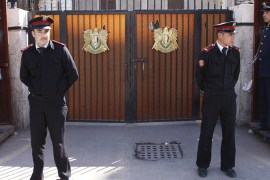 Ban Ki-moon says Syria’s use of deadly force against demonstrators is “unacceptable”.

Violence erupts at protests in Syria

Reports of violence as residents of three towns fill the streets in demonstrations against the government. 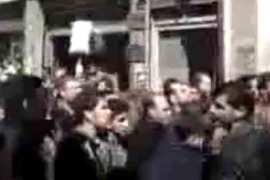 Protesters in Damascus call for release of political prisoners in second public display of dissent in as many days.