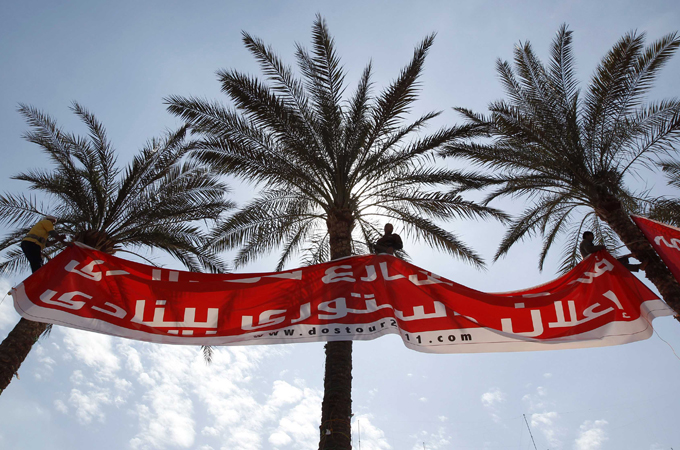 Egyptians will go to the polls on Saturday to vote on a package of constitutional amendments which, in some ways, mirrors the longtime demands of the Egyptian opposition.

The changes would make it easier for independent candidates to run for office. They would bar the president from transferring “terrorism suspects” to emergency courts, a common practice in Mubarak-era Egypt, and re-establish judicial oversight over Egypt’s fraud-riddled elections.

Yet most of Egypt’s formal opposition is urging people to reject the amendments.

Amr Moussa, the outgoing Arab League chief and a front-runner for Egypt’s upcoming presidential election, urged voters to say “no”. So did Mohamed ElBaradei, who wants the referendum to be delayed: “In light of deep divisions regarding the referendum, its cancellation is in the national interest. Unity and clarity of vision are key at this stage,” he said.

The leftist Tagammu party complained that the amendments do not do enough to limit the powers of the president.

The only opposition group to endorse the amendments, in fact, is the Muslim Brotherhood, which has plastered Cairo neighbourhoods with posters urging people to vote “yes”.

Perhaps more importantly, the young activists who led Egypt’s revolution have also decided to reject the amendments: The Revolution Youth Coalition held an internal vote this week, and while it decided to participate in the referendum, it has urged people to vote “no”.

“It is a little strange that they’re rejecting these changes now,” said Mohammed el-Kassas, a member of the youth council, who himself plans to vote “yes” on Saturday.

Voters will decide on a package of nine amendments, about half of which deal with elections – the requirements for presidential candidates, term limits, election oversight and other issues. They must be approved or rejected as a bloc.

Among many Egyptians, it seems, there is a desire for a third option – a way to vote “yes, but …”. They agree with some (though not all) of the amendments, but they want a guarantee that the constitution – seen as an extension of Mubarak’s regime – will be completely overhauled in the near future.

“Say no”: In this video making the rounds on YouTube, Amr Moussa, Amr Hamzawy and other prominent Egyptians urge voters to reject the amendments

Several Egyptians called it the “constitution of a dictatorship” in interviews.

“The amendments are insufficient, and I believe a new constitution should be drafted,” said Deena Adel, a Cairo resident who works in advertising.

Saturday’s amendments would (on paper, at least) lead to a new constitution: The revised article 189 requires the new parliament to create a constitutional committee within six months of taking office. That committee’s work will then be subject to a public vote.

But critics of Saturday’s vote fear that it will serve as a permanent referendum on parts of the current constitution – that they will automatically be included in the next constitution, as well.

Many voters are particularly upset with the revised article 75, for example, which sets out requirements for the president. It bars anyone from holding the office if his parents are dual citizens of another state, or if his wife is non-Egyptian. “It means that not all Egyptians can serve as president,” one activist told me. “This is unacceptable, and it must not be carried over.”

Activists have been circulating a two-page flyer which outlines all of the powers the president would keep under the amended constitution. He would still appoint one-third of the shura council, the upper house of parliament, and up to ten members of the lower house; he would still command the national defence council and the police; and he would retain the power to choose a vice president after his election.

Even his power to unconditionally dissolve parliament remains untouched.

The referendum’s main support has come from two groups: the former ruling National Democratic Party, and the Muslim Brotherhood. (Unsurprisingly, the NDP’s support has raised concerns in Egypt: “If Mubarak’s people support it, you can be sure something’s up,” one political analyst in Cairo told me.) 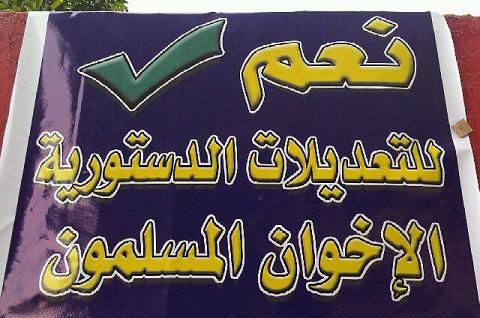 The Brotherhood’s endorsement is, at least in part, canny electoral politics: If the amendments are approved, Egypt’s military junta plans to move forward with parliamentary elections in June – a short timetable which gives independent parties little time to organise and field candidates.

A “yes” vote, in other words, would favour Egypt’s established political parties – particularly the NDP and the Muslim Brotherhood – which are already in a position to contest the election.

The NDP, for obvious reasons, has historically dominated the Egyptian parliament, and the Brotherhood had by far the largest minority bloc – nearly 20 per cent of seats – in the parliament elected in 2005.

Other parties have historically held only a token number of seats: The 2005 election, for example, produced only nine representatives from Tagammu, al-Ghad and al-Wafd.

Brotherhood leaders have said they will not seek a majority in parliament, setting their goal around 35 or 40 per cent. (It is unclear, of course, whether they would even reach that goal: A poll conducted earlier this year by a US-based firm found the group had a 15 per cent approval rating among Egyptians.)

In interviews with Egyptian activists, though, most discounted the fears that the referendum – and the subsequent parliamentary election – would unfairly privilege the NDP and the Brotherhood.

“It would be like delaying the World Cup because you are worried Brazil will win,” said Mostafa Hussein, a psychiatrist who worked until recently at a centre for the rehabilitation of torture victims. “It’s not the fault of Brazil – or, in the case of Egypt, the Muslim Brotherhood. It’s everyone else’s fault.”

Hussein and others cited a bigger concern: That a “no” vote would mire the country under prolonged military rule, perhaps for years.

“If the amendments are passed, the situation will become very sad because we will be reproducing Mubarak’s regime.” — Hossam Issa, law professor, Ain Shams University

“We want a new constitution and an extension of the transitional period with the formation of a presidential council.” — Shadi al-Ghazali Harb, youth activist

“Are we going to move on, or slam into a wall, or start derailing the process? If it is rejected, what do we do, have a military council for two or three years?” — Hisham Kassem, political analyst

“If we vote no, we’re not sure what the army will do,” said el-Kassas, from the youth coalition. “Either way, yes or no, we will eventually get a new constitution … the only difference is how long the army will be there.”

Call this the “progressive yes” camp, which worries that a failed referendum could stall the revolution’s momentum. Alaa Abd El Fattah, an activist in Cairo, warned in a much-cited blog post this week that rejecting the amendments could consolidate the army’s power.

“The current status is that the power is in the hands of the armed forces,” Abd El Fattah wrote, “while the street is not mobilised after the appointment of Essam Sharaf as the prime minister. And this is a situation I strongly believe is dangerous.”

He went on to note recent allegations of human rights abuses committed by the army, which was accused on Wednesday of torturing people arrested in Tahrir Square earlier this month.

And he argued that Egyptians should focus on one immediate goal: A move towards civilian rule. Zeinobia, a popular Egyptian blogger, made the same argument this week, writing that a “yes” vote would send the army “back to its barracks” within six months.

That is the hope, at least – though Hussein, the psychiatrist, acknowledged that he is still undecided about his own vote, and worried that accepting the amendments would sell short the goals of the revolution.

“The amount of change that the opposition asked for in the past is not enough for what the people aspire to now,” Hussein said. “There’s a chance to build a better democratic system.”