Bahrain has asked for help from neighbouring Gulf Arab countries after protesters overwhelmed police and cut off roads, and an adviser to the royal court said the forces were already on the strategic island kingdom.

“Forces from the Gulf Cooperation Council have arrived in Bahrain to maintain order and security,” Nabeel al-Hamer, a former information minister and adviser to the royal court, said on his Twitter feed late on Sunday, accroding to the Reuters news agency.

“GCC forces will arrive in Bahrain today to take part in maintaining law and order,” the paper wrote. “Their mission will be limited to protecting vital facilities, such as oil, electricity and water installations, and financial and banking facilities.”

Many Bahrainis are now nervously looking across to Saudi Arabia and wondering whether the giant neighbouring kingdom will send troops to prop up its close ally, the Khalifa monarchy.

That question has been a topic of conversation in Manama for weeks. And The Guardian reported on Monday that Salman bin Hamad al-Khalifa, Bahrain’s crown prince, would formally request a Saudi intervention later in the day.

Such a move seems unlikely to win much support: Anti-government protesters worry that Saudi troops will be used to clear Pearl Roundabout. And even some government supporters fear the economic impact of what would essentially become a foreign invasion.

“Who would want to do business here if there are Saudi tanks rolling across the causeway?” asked Abdullah Salaheddin, a Bahraini banker, last week, referring to the 26-kilometre causeway which connects the island kingdom to Saudi Arabia.

Abdulrahman bin Hamad al-Attiya, the secretary general of the Gulf Cooperation Council, the regional bloc that counts both Saudi Arabia and Bahrain among its members, gave a nod to military intervention in a statement on Sunday; he said that “safeguarding security and stability in one [GCC] country is a collective responsibility.”

“That would be the unthinkable,” he said.

The parliament bloc’s statement, carried by the state-run Bahrain News Agency, asked for a three-month declaration of martial law and claimed “extremist movements” were trying to disrupt the country and push it toward sectarian conflict.

The appeal also seeks a curfew and the dispatch of army units around the country.

This comes as tense calm is reported in Bahrain as residents wait to see whether more violent clashes will erupt in the capital.

Witnesses in Manama say the capital of the tiny Gulf state has been unnaturally quiet on Monday morning, with downtown roads largely empty except in the area around Pearl Roundabout, the heart of Bahrain’s month-old protest movement. Demonstrators have set up barricades on some roads to block commuters.

It was a different scene yesterday, when riot police used tear gas and rubber bullets to disperse protesters camped in front of Bahrain Financial Harbour, a waterfront commercial hub. Dozens of protesters sought medical help after the attack.

There were also clashes between pro- and anti-government groups at the University of Bahrain in the southern city of Sakhir. The school has now suspended all of its classes indefinitely. 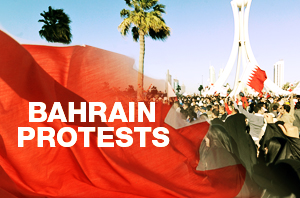 Witnesses say there are now checkpoints – manned by ordinary citizens – in several cities and towns outside Manama.

The thousands of protesters camped in Pearl Roundabout say they will not leave until the king steps down and the government implements political and economic reforms.

But there is a growing frustration with the protests, which many Bahrainis complain has brought the country’s economy to its knees. Hotel occupancy is low, the country’s popular Formula One race has been postponed, and many citizens and foreign residents say the protests have prevented them from going to work.

“The priority today is peace,” one Bahraini man said, asking to remain anonymous. “The only outcome of this situation is a weakened economy and a divided country.”

The White House, which considers Bahrain a key ally, condemned Sunday’s violence, urging the government to “pursue a peaceful and meaningful dialogue with the opposition rather than resorting to the use of force.”

The Wall Street Journal reported that the US state department is “investigating the actions of the Bahraini police and ministry of interior forces” as part of a broader review of US military aid to the region.

There is a federal law which bars the US government from providing military aid to security forces which commit human rights abuses, though that requirement is often ignored.

Bahrain received roughly $19 million in military aid from the US in 2010, and expects to receive a similar amount this year.

But apart from rhetorical condemnation, the US has yet to take any action against Bahrain’s government.

Robert Gates, the US defence secretary, met with King Hamad bin Isa al-Khalifa in Manama on Saturday, and while he urged political reforms, he also praised Bahrain’s government for moving ahead with “a process of reform while sustaining stability and continuity.”

The British foreign office, meanwhile, said on Sunday that its citizens should avoid all travel to the Gulf kingdom.