Tens of thousands of supporters of Saad al-Hariri, Lebanon’s former prime minister, have rallied in Beirut calling for Hezbollah, the Shia group that toppled him, to give up its weapons.

The rally in the capital’s Martyrs’ Square on Sunday was a show of support for al-Hariri who was pushed into opposition earlier this year when Hezbollah and its allies pulled out of his government.

“It is impossible for weapons to stay raised against the will of a democratic people and against the truth,” al-Hariri told the crowd.

“We want to put [Hezbollah’s weapons] under the control and authority of the state because it’s the army which protects us all.”

Many in the crowd waved Lebanese flags and the banners of al-Hariri’s Future Movement.

Hezbollah’s weapons are a longstanding and contentious political issue in Lebanon and with Iranian backing, the group’s arsenal is thought to outweigh that of the national government.

Hezbollah was the only Lebanese faction allowed to keep its weapons at the end of the country’s 1975-90 civil war. The movement says it needs them to defend Lebanon from possible Israeli attack.

Al-Hariri has taken a strong public stance against Hezbollah in recent weeks, contrasting with his softer tone in the 14 months he was prime minister.

Hezbollah members are expected to be named in still secret indictments issued two months ago by the UN tribunal investigating the 2005 assassination of Rafiq al-Hariri, another former prime minister and Saad al-Hariri’s father.

Sunday’s rally also paid tribute to al-Hariri’s father, whose killing sparked a widespread protest movement that became known as the “cedar revolution” and which ushered in the end of Syria’s 30-year military domination of Lebanon.

Hezbollah denies having anything to do with al-Hariri’s killing and its ministers walked out of Saad al-Hariri’s government when he refused to cut ties with the tribunal.

After Hezbollah toppled the government in January, Najib Mikati, a Sunni businessman, was appointed prime minister-designate with the backing of Hezbollah and its political allies. Six weeks on, Mikati is still seeking to form a government. 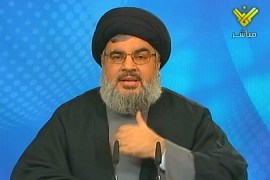 Leader Nasrallah says protesters are fighting for ‘Arab dignity’ and slams US for supporting region’s ‘dictatorships’. 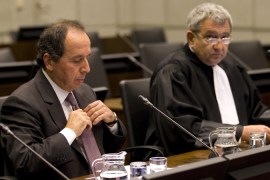 UN-backed tribunal seeks to define “terrorism” ahead of trial of those indicted over assassination of former Lebanon PM. 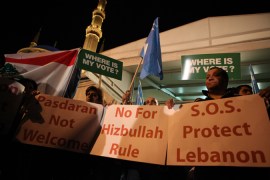 Lebanon convulses on ‘Day of Rage’ 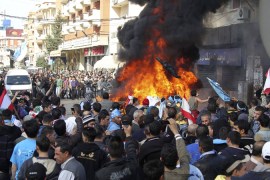 Saad Hariri’s supporters lash out after the nomination of Lebanon’s new PM, the Hezbollah-backed Najib Mikati.